The parties agree that Varsity Brands could get some protection for the combination of chevrons, zigzags and stripes that characterizes its uniforms: The common example in the argument was that Varsity Brands could prevent somebody from copying the design of its uniforms onto a lunchbox. Both sides also agree that a work of art designed with no consideration at all for functionality – a painting by Picasso – would be fully protected when applied to clothing: The painter could prevent a third party from selling shirts featuring an image of his painting.

The point on which the parties disagree is how to treat a graphic design influenced by the functionality of the clothing to which it is applied. In this case, Star Athletica contends that Varsity has chosen its particular configuration of chevrons, zigzags and stripes because it tends to make the wearer of the uniform look “slimmer,” “taller” and even (so counsel told the justices) “curvier.” John Bursch, appearing on behalf of Star Athletica, insisted that the utilitarian aspect of the design – the role that functionality plays in the choices made in configuring the graphic design – makes copyright protection inappropriate when the design is applied to a uniform. So Bursch was happy to concede – emphatically and repetitively – that Varsity Brands could prevent anybody from applying their design to a lunchbox.  But he pressed just as vigorously the idea that Varsity Brands should have no protection for the design as applied to a uniform. 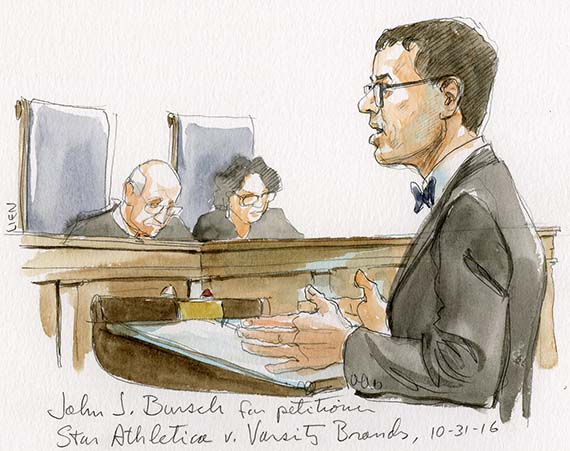 Some of the justices worried that Bursch’s argument called for an intractable exercise in line-drawing. As Justice Anthony Kennedy asked early in Bursch’s presentation, “What’s the difference between Mondrian or Picasso and these [product] lines?” Much of the discussion centered on a reformulation of Bursch’s argument offered by Chief Justice John Roberts, that a design cannot be copyrighted “when the design is what makes the useful article what it is.” As Roberts summarized Bursch’s line of thought, “the design on a lunchbox doesn’t make the lunchbox a lunchbox. It’s still a lunchbox. But the design on a cheerleading uniform is what makes it a cheerleading uniform, as opposed to a plain dress.” Several of the justices seemed to worry about the difficulty of parsing that question. For example, Justice Ruth Bader Ginsburg at one point wondered: “How do we decide that it’s the design that makes it what it is, as opposed to the cut of the garment, the shape, the pleats or whatever, the tightness of the top. Why should we say that this two-dimensional design, which could be put on many things, is what makes this article utilitarian?”

Another group of justices seemed deeply troubled by the competitive implications of the dispute. Most obviously, Justices Sonia Sotomayor and Stephen Breyer teamed up to challenge William Jay, representing Varsity Brands, on that point, consuming a major portion of their argument with an interlocked parade of the horrible results that would ensue from a decision in favor of Jay’s client. Sotomayor started off the barrage by asking whether “the universities that contract with you know that they have to buy their uniform from you for 99 years plus whatever? Every university that you sell these cheerleading uniforms to, do they know that under your copyright they are stuck with you forever?” 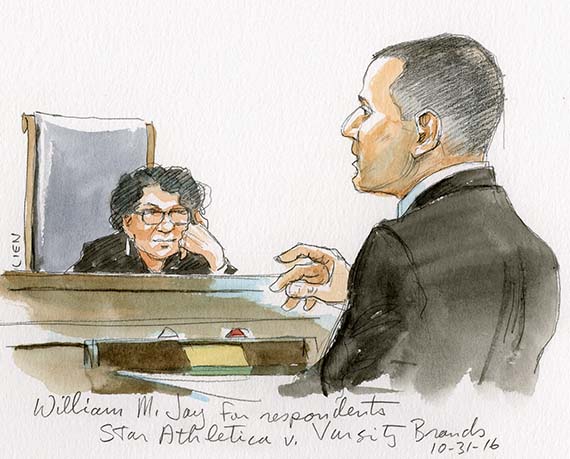 Breyer followed up with an even more aggressive line of questioning:

I have exactly the same question … All women’s clothes have design. All men’s clothes have design. For a hundred and more-than-that years, the fashion industry has not enjoyed copyright protection. It is an industry on the women’s side, I believe, that [sells] 225 billion dollars, at least, worth of clothes … each year. If suddenly in this case we say that dresses are copyrightable – and they are because every one of them has some design – perhaps we’ll double the price of women’s clothes … Why don’t you disabuse me of my notion that we are into monopoly big-time?

Closing the discussion with emphasis, Justice Breyer concluded: “I fear that any good designer or lawyer could go and take any dress or suit, just about, and produce a picture that looks very much like that and then sue the companies that use the same dress or style.”

Perhaps the most interesting part of the discussion was a group of relatively disjointed comments exploring how much sense it makes to use copyright law – designed to protect “expression” – to protect the design of clothes. Roberts, for example, commented that the uniform is not designed “simply to cover the body. It’s to convey a particular message. It shows that you’re a member of the cheerleading squad.” More expansively, Breyer commented that it “is a normal reason for wearing clothes” for people to “mak[e] a statement about themselves. They’re saying who they are. The clothes on the hanger do nothing; the clothes on the woman do everything. And that is, what I think, what fashion is about,” a flourish that moved Kagan to exclaim that Breyer’s comment was “so romantic”! Following up on Breyer’s point a few minutes later, Kennedy wondered whether it “[i]s the domain of copyright to [protect] the way people present themselves to the world.” To some degree, those ideas seem to cut in the opposite direction from the points that Roberts and Breyer had been making earlier, because they tend to emphasize the expressive rather than the utilitarian aspects of the design. My impression, though, is that the comments were more the product of momentary reflection than of a view about the case.

The summary above should make it clear that this is not a case in which the argument tells us much about what the court is likely to say at the end of the day. It seems plain that several of the justices have a strong predisposition to reverse and hold the design of the uniforms unprotectable. But whether the justices can converge on a single explanation of that result seems much less certain. Although it might be a powerful motivator toward a particular result, the intuitive sense that “we don’t want to give a monopoly over fashion” will not, I think, be all that useful in crafting a doctrinal framework to explain that result.