A “view” from the courtroom: The election and U.S. values

By the rhythms of its calendar, at least in recent years, the Supreme Court always holds arguments during election week, including on Election Day and the day after. This year was no different.

And while the court seems to avoid scheduling, say, a redistricting case or some other overtly political matter on Election Day, cases argued each day this week brought some reminder of presidential politics.

On Monday, the connection was obvious. National Labor Relations Board v. SW General, Inc. was about the interpretation of a 1998 federal law governing the ways the president may fill vacancies that arise in positions that typically require Senate confirmation. The statute arose out of the same struggle between the White House and the Senate over vacancies and nominees that exists today. 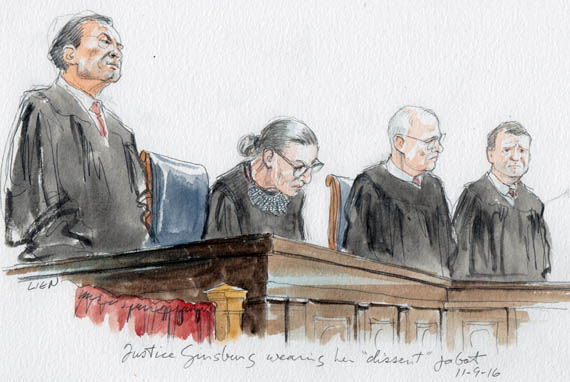 On Tuesday, the reminder was more subtle. In the consolidated argument in Bank of America Corp. v. City of Miami and Wells Fargo & Co. v. City of Miami, about whether a city can be an “aggrieved person” under the Fair Housing Act, it was a series of questions from Justice Sonia Sotomayor about housing-discrimination “testers” that brought to mind Hillary Clinton’s work in Alabama in 1972, as a “tester” for school discrimination. As The New York Times reported last winter, Marian Wright Edelman had sent Clinton, then a 24-year-old law student, “to help prove that the Nixon administration was not enforcing the legal ban on granting tax-exempt status to so-called segregation academies, the estimated 200 private academies that sprang up in the South” in the wake of court-ordered desegregation.

On Wednesday, the court has just one case left for argument on its November calendar, and it concerns an issue that we can safely say was a topic of presidential politics — immigration. However, Lynch v. Morales-Santana does not quite rise to the level of United States v. Texas, the challenge to President Barack Obama’s broad immigration enforcement policies that had protesters filling the streets and sidewalks around the court last spring.

The justices take the bench promptly at 10 A.M. Justice Stephen Breyer is smiling and will carry on side conversations with Justice Clarence Thomas throughout the argument.

Justice Elena Kagan is looking glum, and she lets out a pretty big yawn before even a minute has gone by. Of course, the justices have been known to yawn even on days when they might not have stayed up until two or three in the morning watching election results.

When Deputy Solicitor General Edwin Kneedler takes to the lectern to defend a 1952 immigration law’s differential treatment of unwed U.S. citizen mothers of children born abroad and other citizen parents of such children (married mothers and fathers, married or not), the justices are not quite in their normal form. They let Kneedler go on for several minutes before Chief Justice John Roberts interrupts with a question. Justice Samuel Alito, who had appeared a little low-energy during Tuesday’s fair housing argument and uncharacteristically did not participate in the discussion, this morning has his white coffee cup at his place at the bench and is considerably more chipper when he dives in with some questions.

Stephen A. Broome, a Los Angeles lawyer representing Luis Ramon Morales-Santana, a permanent U.S. resident who is challenging the disparate citizenship requirement, is also permitted to speak uninterrupted for several minutes at the outset of his argument. Of course, that may be in part because seven of these eight justices heard similar arguments on this issue in a 2011 case in which Kagan did not participate and the others deadlocked 4-4.

There will be a few other threads this morning that bring politics to mind. Breyer mentions “American elections,” but in the context of whether a young person who has gained birthright U.S. citizenship takes to voting regularly. Justice Ruth Bader Ginsburg will ask why the federal government doesn’t consider men and women similarly situated “with respect to U.S. values.”

“There’s no reason to think a man … has less of a sense of a U.S. belonging than a woman,” says Ginsburg, who will raise several points today about equitable treatment of the sexes.

In general, the day after an American election at the Supreme Court symbolizes continuity in at least one branch of the federal government, and that is one U.S. value that men and women with different presidential preferences can appreciate.

Only when the justices rise to leave the bench at the end of the argument do we notice that Ginsburg, who gained attention last summer for remarks criticizing Donald Trump that she later sought to walk back, is wearing her “dissent jabot.”

This is the black and gold collar that Ginsburg once told TV anchor Katie Couric that she reserves for days when she is reading one of her dissents from the bench. (Ginsburg has a closet full of jabot finery, including some bright ones she typically chooses for days when she announces a majority opinion.)

Today’s jabot choice is a reminder that many observers had perceived Ginsburg’s closing to her dissent in Bush v. Gore, in which she said “I dissent” instead of “I respectfully dissent,” as a subtle form of protest against the ruling that decided the 2000 presidential election. (Ginsburg later said that liberals overreacted to the formulation.)

Whether her collar choice today was intentional or not, the election results mean that Ginsburg may need to keep her dissent jabot polished and ready for use.