A “view” from the Courtroom: Philadelphia in 1794

PHILADELPHIA, September 19, 1794 — Your correspondent has traveled from the budding City of Washington in the Territory of Columbia to our nation’s capital here to cover a rare jury trial in the Supreme Court of the United States.

I ride the express, eight-horse-drawn carriage rather than the slower, four-horsepower “regional” carriage, which stops in all the smaller towns along the route. Although the faster carriage costs a few more shillings, I will justify it on my expense account by noting that the faster one gets me into Philadelphia in time to have the buckles on my shoes shined and my wig re-powdered.

I also buy a newspaper, Dunlap & Claypoole’s American Daily Advertiser, which has news about the Court convening, the French Revolution, ships preparing to set sail, and something that seems to hark from a different era, that “the Phillies are out of the pennant race.”

After an initial, unremarkable term in New York City, the Supreme Court has convened since 1791 at the City Hall of Philadelphia (which I predict will one day be called Old City Hall), next door to historic Independence Hall.

The case for argument today is Georgia v. Brailsford, a knotty dispute over an unpaid debt incurred before the Revolutionary War that implicates states’ rights, international treaties, fair credit, and the reputation of the still-new Supreme Court.

“In 1794, this case was a very big deal,” says Chief Justice John Roberts.

To switch to a present-day perspective, Chief Justice Roberts, along with Justices Stephen Breyer and Samuel Alito, are here to preside over the reenactment of the case, which in 1794 was argued simultaneously both to the Court and a special jury. This reenactment is occurring in the very courtroom the Supreme Court used in Old City Hall from 1791 to 1800. 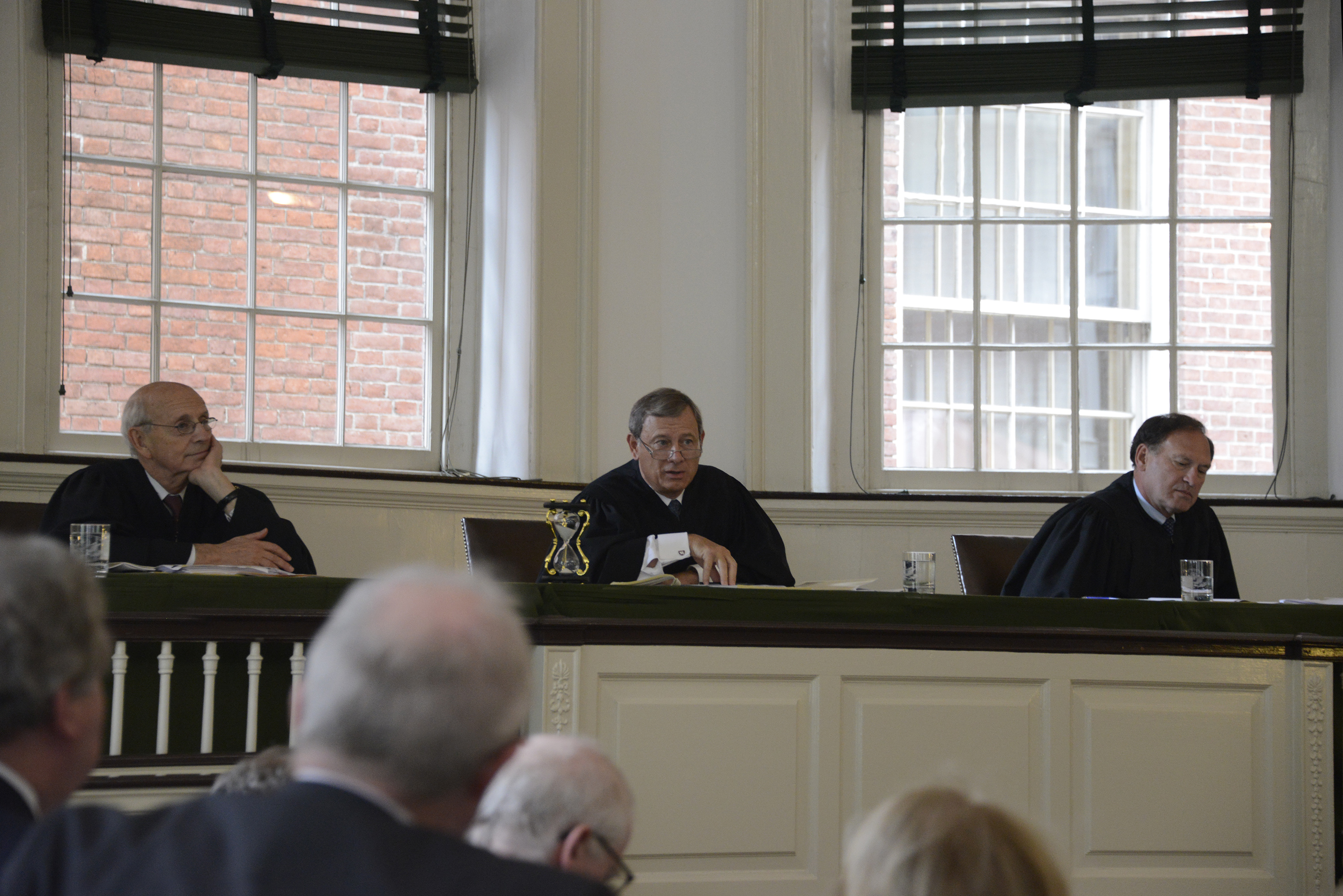 Photograph by Franz Jantzen, Collection of the Supreme Court of the United States

The reenactment is a product of the United Kingdom-United States Legal Exchange, a project affiliated with the American College of Trial Lawyers, which has been meeting in Philadelphia for the past few days. The 2015-16 exchange involving leading judges and lawyers from the two countries has included papers and panels on topics that include “access to justice” and “terrorism and secret courts.” (One could understand why those might not be ripe for mock arguments before sitting members of the Supreme Court.)

The case involves Samuel Brailsford, a British merchant who loaned money in 1774 to a group of Americans, including Georgia colonist James Spalding. In 1776, of course, the American colonies declared their independence from Britain. In 1782, near the end of the ensuing Revolutionary War, Georgia passed its Confiscation Act, which “sequestered” debts due to residents of Great Britain.

After the 1783 Treaty of Paris formally ended the Revolutionary War, Brailsford sought payment of his outstanding debt, which one historical account pegs at more than 7,000 pounds sterling. It’s not clear how much that would be in 2016, but it must have been significant, because the debt led to years of tortured litigation.

Because Georgia had sequestered the amount in question, that state stepped into the litigation, asserting its right to the debt. The program for the reenactment gives due acknowledgement to two scholarly pieces on the case, which anyone interested in all the peculiar details should consult: “Georgia v. Brailsford,” in the Documentary History of the Supreme Court, 1789-1800, by Maeva Marcus (a version also appears in the Journal of Supreme Court History in 1996); and “Special Juries in the Supreme Court,” a note in a 2013 issue of the Yale Law Journal by then-law student Lochlan F. Shelfer.

As the case progressed, the parties stipulated to a largely fictional set of facts so they could overcome some procedural obstacles and move forward with the case, and this rare jury trial in the Supreme Court came about absent any real need for fact-finding. Shelfer’s scholarship in particular explains that the jury convened by the Supreme Court was a special jury of merchants, a concept stemming from “the law merchant,” a body of commercial law used by merchants in Europe, advanced by Lord Mansfield in Britain in the mid-1700s.

In the Supreme Court, there are two questions, Chief Justice Roberts says. When Georgia “sequestered” Brailsford’s debt, did the debt vest with the state? And if it did, was the state’s title to the debt later abrogated by the Treaty of Paris, which provided that “creditors on either side shall meet with no lawful impediment to the recovery of the full value in sterling money, of all bona fide debts heretofore contracted.”

Roberts notes some issues that were par for the course in the early days of the Supreme Court.

Alexander Dallas argued for Georgia, while publishing the the Court’s opinions on the side (and thus is credited as the first Supreme Court Reporter). William Bradford Jr., whose own part-time side job was Attorney General of the United States, argued as a private attorney for Brailsford.

Also, Chief Justice Jay, who had negotiated the Treaty of Paris, nonetheless presided over the Supreme Court proceedings involving a provision of that treaty.

“As all these peculiarities indicate, our young nation was far more tolerant of potential conflicts of interest than we are today,” Roberts says.

In the reenactment, Chief Justice Roberts and Justices Breyer and Alito serve as the Court. The attorneys for Georgia are William T. Hangley and Paul Mark Sandler, while Linda Dale Hoffa and Alfred W. Putnam Jr. handle the arguments for Brailsford.

In 1794, the Court heard four days of arguments.

“We will not faithfully reenact that aspect of the case,” Roberts says. Instead, each attorney gets ten minutes, and the Chief Justice has an sand-filled hourglass as his timer. He also notes that the 1794 justices would have worn robes with red and white accents of English vintage.

“But today we will settle for our own simple black robes, the style the Court has used with rare exception for at least 215 years,” Roberts says. (His “rare exception” remark, likely a reference to Chief Justice William Rehnquist’s gold-striped robes, gets only a hint of a reaction in the courtroom.)

The merchant jury is composed of seven real United Kingdom jurists. They include two members of the still relatively new Supreme Court of the United Kingdom—the Right Honorable The Lord Mance and the Right Honourable Lord Reed. (It’s not clear why The Lord Mance gets a “the” before his title and Lord Reed does not, but it’s not a typo. That’s also how the names are listed on the UK Supreme Court’s website.)

Jeffrey Minear, usually the counselor to the Chief Justice, is the “crier” for the reenactment, calling the Court to order with the same traditional opening used today.

The advocates then present their arguments, with Justices Roberts, Breyer, and Alito interrupting them with questions in the style of the modern-day “hot bench.”

“Could Georgia, in the interest of good international relations, have returned the money to the creditors?” Justice Alito asks Hagley, who says that was unlikely because the state’s confiscation law was motivated by the “countless indignities” of British rule.

Alito also questions Sandler about the consequences of a state disregarding a provision of the Treaty of Paris.

“C’est la vie,” the lawyer responds. “The statute says what it says.”

Justice Breyer asks Sandler, “Why did the Framers, I think somewhere near here,” only require Senate ratification of treaties?

At the end of the arguments, Chief Justice Roberts announces a legal judgment by the Court that Georgia only sequestered, but did not confiscate, the debt in question, and that under the law of nations and the Treaty of Paris, the end of the war revived Brailsford’s right to sue for recovery of his debt.

This leads Chief Justice Roberts to deliver Chief Justice Jay’s much-debated jury charge, which includes a reminder of the “good old rule” that questions of fact are the “province of the jury” and questions of law are the “province of the court.” “But you have nevertheless a right to take upon yourselves to judge of both, and to determine the law as well as the facts in controversy,” Chief Justice Roberts tells the humble merchants. “Both objects are within your power of decision.” This unusual charge has been the subject of debate as to whether it is an anomaly or possibly even a foundation for the idea of jury nullification. (Shelfer’s Yale Law Journal piece argues it is neither.)

The jurors, who would normally retire to private deliberations, instead conduct their discussion right in the courtroom, and they rule unanimously for Brailsford.

Chief Justice Roberts thanks the jury for its service and further explains that the 1794 jury also returned verdicts for Brailsford on both of the questions presented.

“That is, they concluded that when Georgia sequestered the debt, it only suspended payment until after the war.” the Chief Justice says. “And even if the debt had been confiscated before, the Treaty of Paris would have annulled the relevant provision in the Georgia statute.”

“But as you can probably tell from the oral argument, this case was about much more than those two litigants fighting over money,” the Chief Justice continues. “In the broadest sense, it was about a young court beginning to weigh questions of statutory interpretation, the court’s jurisdiction, the separation of powers, and the operation of the treaty. . . And for all this, we drew on the experience and history of our cousins in the United Kingdom for help, as we do on so many occasions.”

Chief Justice Roberts notes some of the peculiarities of the case, including the possibility that Brailsford may really have been American, while two of the American debtors had refused to take the oath of allegiance to become U.S. citizens, “so they may have in fact still been British subjects.”

And Brailsford never fully collected on the debt, the Chief Justice says.

Furthermore, he says, in a fact not revealed by the two main research pieces on the case, the underlying debt appears from the pleadings in the case to have been tied to the slave trade. “We cannot deny that aspect of our past, but we can learn from it,” he says.

Chief Justice Roberts, who had earlier recognized the 100th anniversary of the National Park Service, which runs the Old City Hall as part of the Independence Hall historic site, builds on the slavery reference to promote this week’s opening of the Smithsonian Institution’s National Museum of African American History and Culture in Washington, D.C.

With that, Minear bangs his gavel and the reenactment itself becomes history.