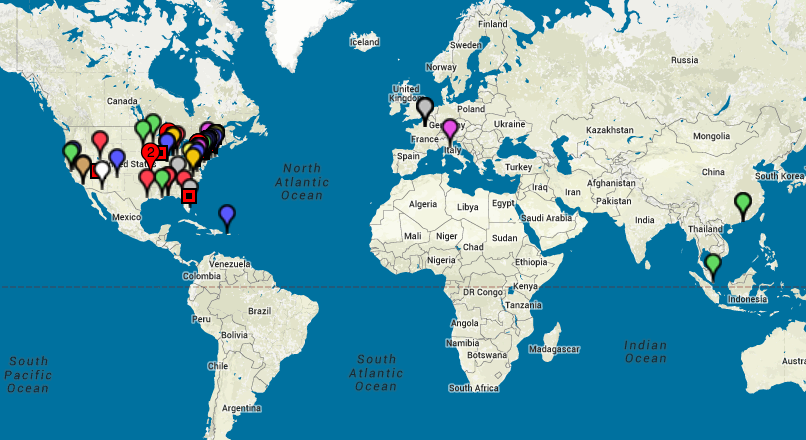 A snapshot of the Justices’ appearances in OT2015.

Because June has traditionally been a busy opinion-writing month for the Supreme Court, the Justices’ schedule of events was relatively light in comparison to previous months.

On June 1, Justices Ruth Bader Ginsburg and Sonia Sotomayor made a joint appearance at the Smithsonian National Museum of American History to shed some light on an infrequently discussed issue: the importance of food at the Supreme Court. Ginsburg and Sotomayor treated the audience to anecdotes about food traditions shared between the Justices and their clerks, the occasional meal prepared from game that the late Justice Antonin Scalia had hunted, and favorite lunchtime discussion topics at One First Street. “There is one major topic to which I don’t contribute – but you do, certainly – and that’s sports,” Ginsburg said to Sotomayor. “I’m sorry, Ruth, you’re right,” Sotomayor responded. “But actually, I only contribute, really, on baseball. The real sports person is Elena Kagan, our colleague.” Andrew Hamm covered the event for SCOTUSblog, while C-Span posted video of the appearance.

On June 10, retired Justice John Paul Stevens spoke at the Arlington County Bar Association Luncheon in Virginia; the transcript is available on the Supreme Court’s website. In his remarks, Stevens noted that he was “troubled” by the delays in scheduling Senate confirmation hearings for vacancies on the federal bench, particularly for trial judges. “The shortage of federal trial judges has a more serious impact on the administration of justice than the vacancy on the Supreme Court,” Stevens said.

Finally, Breyer and Ginsburg closed out this Term’s appearances by participating in the Shakespeare Theatre Company’s Annual Mock Trial on June 20 in Washington, D.C. This year, the trial was based on George Orwell’s 1984. According to Jess Bravin of The Wall Street Journal, Breyer took the opportunity to make his questions rhyme, “evoking the hip-hop musical, ‘Hamilton.’”

Overall, SCOTUS Map recorded 125 appearances in OT2015, with the breakdown (by month and by Justice) detailed in the chart below. The overall number for OT2015 represents a decline from the 144 events recorded for OT2014. This decline may be partially attributed to the loss of Justice Scalia, who was responsible for twenty-five appearances in OT2014 and appeared at ten events in OT2015 before his death in February of this year. Retired Justice Sandra Day O’Connor, who notched eleven appearances on the Map in the previous Term, made only two appearances this Term.

Nearly one-quarter of the Term’s events – twenty-nine out of 125 appearances – were held in Washington, D.C.  New York City was also a popular destination for the Justices, with twenty-two events.

Looking at the distribution of events by month, March 2016 (eight events) and June 2016 (four events) were the least busy months, while May 2016 – the only month when the Justices did not have oral arguments – was the busiest with twenty-one events. 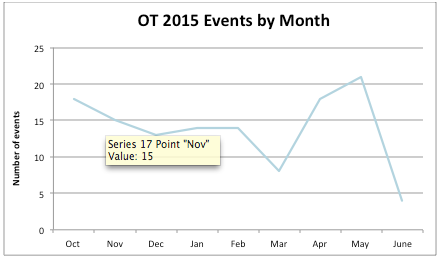 Breyer, who has been actively promoting his latest book on the speaking circuit since its publication last September, was the busiest Justice in OT2015, recording thirty-two appearances. Sotomayor was the second-most active Justice with twenty-three events, while Ginsburg came in third with seventeen events.

Of the three retired Justices, Stevens logged the most appearances with seven, and Justice David Souter the least with one. 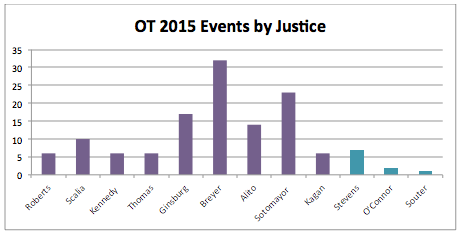