Opinion analysis: No constitutional violation from use of tribal-court convictions as predicate offenses 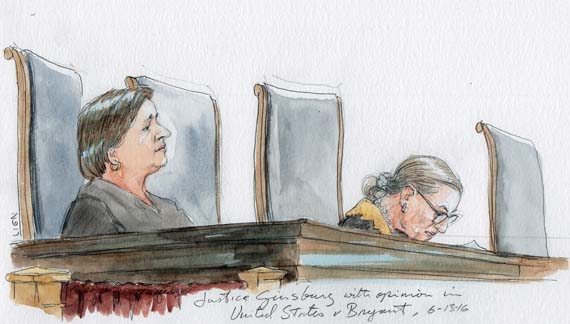 Justice Ginsburg with opinion in US v. Bryant, with Justice Kagan seated on left and Justice Alito absent (Art Lien)

Michael Bryant Jr., a member of the Northern Cheyenne Tribe, appears to be exactly the kind of serial wrongdoer Congress was targeting with the 2005 law:  over a ten-year period between 1997 and 2007, he pleaded guilty on at least five occasions in tribal court to domestic violence charges, never receiving a sentence of more than a year.  But after a series of assaults in 2011, Bryant was indicted by a federal grand jury as a habitual offender.  Bryant tried to have the charges against him dismissed on the ground that he was not represented by a lawyer in any of the tribal-court proceedings that were being used as the basis for the federal charges.  Today the U.S. Supreme Court rejected that argument, holding unanimously that, because Bryant’s tribal-court convictions were valid when they were entered, they could also be used to help convict him on federal charges without violating the Constitution.

The Sixth Amendment guarantees that a defendant in a criminal case who cannot afford an attorney has the right to have one appointed for him if he is sentenced to time in prison.  The Supreme Court has also ruled that, when the Sixth Amendment right to counsel is violated and a defendant is convicted, that conviction cannot be used in a later criminal proceeding “either to support guilt or enhance punishment for another offense.”  So everyone agrees that, had Bryant’s earlier domestic-violence convictions happened in federal or state court, rather than a tribal court, those convictions would have violated the Sixth Amendment – and therefore could not be used to subject him to charges under the 2005 law.

This result, the Court reasoned, is consistent with its earlier rulings, which make clear that laws which are intended to penalize repeat offenders only punish “the last offense committed by the defendant”; they “do not change the penalty imposed for the earlier conviction.” In this case, then, Bryant was represented by a lawyer when he received a sentence of nearly four years in prison for the 2011 assaults; he was not being punished for the domestic violence convictions that occurred between 1997 and 2007, when he was not represented by a lawyer.  And even Bryant himself, the Court pointed out, agreed that his tribal-court convictions could be used as the basis for the federal repeat-offender charges if the tribal courts had merely fined him rather than sending him to prison.

Justice Clarence Thomas joined the Court’s ruling, agreeing that the conclusion flowed logically from the Court’s earlier decisions.  At the same time, though, he questioned the principles on which those decisions rested.  For example, he clearly regarded as flawed what he described as the Court’s “notion” that a conviction for which a defendant was not represented by an attorney cannot normally be used as the basis for a subsequent conviction.  Instead, he emphasized that the text of the Sixth Amendment indicates only that a defendant has the right to the “assistance of counsel” “in that proceeding” – without any repercussions for future proceedings.  And he questioned whether Congress actually has the kind of power over the Indian tribes that would allow it to address domestic violence on Indian land in the first place.

Today’s decision appears to be an unqualified victory for the federal government as well as domestic violence groups, which had strongly urged the Court to uphold federal prosecutions like this one.  The Court made relatively short shrift of broader concerns about the fairness and reliability of relying on tribal-court convictions when the defendant did not have a lawyer.  Citing Bryant’s concession that his tribal-court convictions could have been used against him if he had only been fined, the Court suggested that there “is no reason to suppose that tribal-court proceedings are less reliable when” a defendant is sentenced to a year in prison instead.  And perhaps because – as Justice Stephen Breyer noted at the oral argument in April – Bryant had not argued that his tribal-court convictions violated his rights, the Court seemed disinclined to go any further.  Whether at least five Justices will be more sympathetic if a direct challenge to the fairness and reliability of tribal-court proceedings comes to the Court remains to be seen.