A “view” from the Courtroom: Appointments to keep

With all the discussion around the vacancy on the Court, and the possibility of four-to-four ties and a slow pace of accepting cases for next Term, the Justices are quietly taking a bite out of their pending caseload.

Today is the third “added” – that is, not on the schedule printed in advance – opinion day of the Term. When those days come in early and mid-June, the size of the gallery can be unpredictable. Today is no exception. The bar section is nearly empty as ten o’clock approaches. There are seven members of the Solicitor General’s office, led by Deputy Solicitor General Ian H. Gershengorn, at the counsel tables, five regular lawyers, and lots of empty chairs.

The public gallery is pretty full, though. With a couple of minutes to go before Court begins, three high school students in their distinctive blue Future Farmers of America jackets are ushered to seats. They are a couple of weeks late for Chief Justice John G. Roberts, Jr.’s opinion announcement in United States Army Corps of Engineers v. Hawkes Co. Inc., which included some lessons on the ins and outs of peat mining. (And I suppose peat mining may not be considered farming, but it is close to the land.)

In the press section, Linda Greenhouse is here today. The former longtime Supreme Court beat reporter for The New York Times, who is now a lecturer at Yale Law School and a Times columnist, is in town to promote her new book, The Burger Court and the Rise of the Judicial Right, written with Michael J. Graetz.

Greenhouse and her co-author make heavy use of the archival papers of certain late Justices. Momentarily, with our editor’s indulgence, we’ll make use of one more memo from the Court’s October Term 1978. 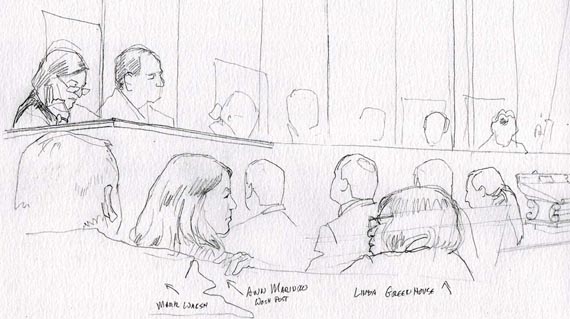 Linda Greenhouse, who used to cover the Court for The New York Times, is back for a visit (Art Lien)

When the members of the Court take the bench, Justice Anthony M. Kennedy is not present. (Justice Samuel A. Alito Jr. was gone on Monday.) This is the time of year when it’s not uncommon for one or two Justices to be absent from a Court session because of travel to circuit conferences and similar engagements.

This brings us to our archival memo du jour. In December 1978, then-Chief Justice Warren E. Burger wrote to his colleagues about adding an extra opinion day before the holiday break.

“We ought to get a few more cases out in calendar 1978,” Burger said in the memo, which is in the files of the late Justice William J. Brennan, Jr.

Justice John Paul Stevens soon wrote to Burger to explain why he would have to miss the special sitting, for the routine reason that he would be out of town for a couple of speaking engagements.

Then-Associate Justice William H. Rehnquist wrote to Burger on December 13, 1978, to provide his own, less routine explanation for why he would have to miss the opinion session.

I will not be able to be present for a Court sitting next Monday at 10:00 A.M. I have a dental appointment (already cancelled once and rescheduled) for 8:45 that morning, which was made on the assumption that there would not be any Court session. The dentist has told me it is work I must have done soon or face the prospect of a root canal, and I find that if I do not keep this appointment I will not able to get in until the Thursday during the first week of our January oral argument calendar. I just don’t want to take that risk, and therefore plan to keep the appointment next Monday. …

It is perhaps comforting to learn that, if Rehnquist was to be believed, even Supreme Court Justices have trouble rescheduling their dental appointments in Washington.

Getting back to October Term 2015, Roberts announces that Justice Elena Kagan has the opinion of the Court in Kirtsaeng v. John Wiley & Sons Inc.

Kagan quickly says that “experienced Court watchers may be experiencing deja vu” because the case has been here before.

“If you do not spend your mornings reading SCOTUSblog,” she says, before explaining that this is the messy attorney’s fees aftermath of what has been a kind of fun copyright case.

In 2013, the Court ruled that Supap Kirtsaeng, a Thai national and U.S. college student, could invoke the Copyright Act’s first-sale doctrine to import cheaper overseas editions of many college textbooks and sell them to U.S. students. (Justice Stephen G. Breyer has made frequent reference to the case in his talks promoting his latest book, The Court and the World.)

Kirtsaeng has won another victory today, as Kagan writes for a unanimous Court that his bid for some two million dollars in attorney’s fees should be revived and re-examined.

The Chief Justice next announces that Justice Clarence Thomas has the opinion of the Court in two cases.

The first case is Kingdomware Technologies Inc. v. United States, ruling for a contractor in a fight with the Department of Veterans Affairs over that department’s rules for awarding contracts to veteran-owned small businesses. The second is Universal Health Services Inc. v. United States ex rel. Escobar, about the “implied false certification theory” under the False Claims Act.

All three decisions today are unanimous, with no concurrences or other complications. It’s as if the Court is saying, here we are, getting our work done and without dissent, to boot.

With thirteen merits opinions to go, the next appointment is scheduled for ten o’clock on Monday morning, with some follow-up procedures later in the month.