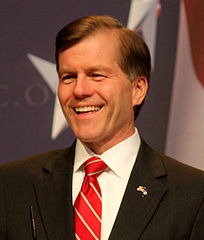 In one of the swiftest falls from political grace in the nation’s modern history, a once-rising star among Republican governors is left now with an eve-of-prison attempt to persuade the Supreme Court that he is innocent of corruption.  The case of former Virginia Governor Robert F. McDonnell has the potential, if he succeeds, to profoundly affect how federal prosecutors treat political favors.

Next Wednesday, April 27, in the final scheduled hearing of the Court’s Term, the case of McDonnell v. United States comes up for one hour of argument.  It is the only case set for that day.  Adding to its legal symbolism, it will mark the one-hundredth argument before the Court by Deputy U.S. Solicitor General Michael R. Dreeben — the government’s most experienced courtroom advocate on criminal law.  He will be opposed by an attorney on McDonnell’s legal defense team, Noel J. Francisco, with the firm of Jones Day in Washington, D.C.

Under an order that the Supreme Court issued last August, McDonnell has remained free while his appeal moved forward.  That order runs out if he loses the case; if that happens, he would then have to report to prison to begin serving a two-year sentence.  Maureen McDonnell, Virginia’s former First Lady convicted along with her husband, has been sentenced to a year and a day in prison; her appeal is currently on hold at the U.S. Court of Appeals for the Fourth Circuit, in Richmond.

As the case reached the Court, it offered the Justices a stark contrast: McDonnell’s lawyers see the case as one that endangers virtually every elected official who provides even small favors or gestures that don’t affect government policy at all, while federal prosecutors see it as a tawdry example of a political power couple who got into deep financial trouble and used a businessman with special wants from the government to bail them out, with $175,000 in largesse — money, luxury goods, expensive outings.

While he led the Virginia state government, McDonnell was often regarded by the political community as one of the GOP’s most promising young figures, assumed to be a strong candidate one day to be at least vice president of the United States.  His prosecution after leaving office, and the revelations that came out in court testimony, left his political career an utter ruin.

McDonnell was convicted of eleven criminal fraud counts; he was found not guilty of two counts of making false statements to a bank.  The center of his appeal to the Supreme Court is a plea for a narrow definition of the phrase “official acts,” in federal fraud, bribery, and extortion laws.  His lawyers are counting heavily upon what they take to be a recent trend in the Court’s criminal law rulings to pare down significantly the anti-corruption weapons of federal prosecutors.

McDonnell was charged (as was his wife) with violating a federal law that makes it a crime to engage in fraud on the public by denying it the “honest services” of a public official who took a bribe; with violating the Hobbs Act, which criminalizes extortion and which the Supreme Court has previously interpreted to include a bribe in return for “official acts”; and with a conspiracy to commit the “honest services” and Hobbs Act crimes.  In the instructions given to the jury in McDonnell’s case by the trial judge, all of those crimes were described as keyed to the exchange of “official acts” or “official action” for something of value.

Federal prosecutors built their case primarily with the help of the McDonnells’ main benefactor, Jonnie R. Williams, a Richmond businessman.  Williams, the government lawyers said, wanted the governor to use his influence in state government to help Williams’s company, Star Scientific, promote a tobacco-based supplement that supposedly could be used to treat various ailments.

McDonnell’s lawyers, in taking his case to the Supreme Court after a challenge failed in the Fourth Circuit, argued that the government’s case was keyed to “five supposedly ‘official acts.’  Yet those five acts . . . were limited to routine political courtesies: arranging meetings, asking questions, and attending events.”  Not one part of the evidence, his petition contended, showed that he ever “exercised any governmental power on behalf of his benefactor, promised to do so, or pressured others to do so.”

His petition summed up: “This is the first time in our history that a public official has been convicted of corruption despite never agreeing to put a thumb on the scales of any government decision.  Officials routinely arrange meetings for donors, take their calls, and politely listen to their ideas.”

Turning the “commonplace actions” he was said to have carried out into criminal felonies, his lawyers contended, would hand to federal prosecutors the discretion to bring criminal charges against nearly every elected official they could choose.

His appeal asks the Court to rule either that the evidence against him did not prove a violation of any corruption charges or, if they did reach as far as prosecutors claimed, the laws should be struck down as unconstitutionally vague.

Justice Department lawyers tried to head off Supreme Court review of McDonnell’s case, arguing that the former governor’s lawyers were using “sweeping rhetoric” to challenge a prosecution that simply alleged that he had used the power of his office to influence governmental decisions.

“[Jonnie] Williams lavished gifts on [McDonnell] not to obtain the sort of general ‘access’ commonly provided to campaign donors, but rather in exchange for [McDonnell’s] agreement to use his position to influence state officials to dispose of government matters in a manner favorable to Williams.   Reaffirming that such quid pro quo agreements are unlawful poses no threat to legitimate political activity.”

McDonnell’s lawyers asked the Court to rule on two issues.  First, they urged the Justices to define what “official acts” must constitute to be the basis for a claim of bribery or public corruption and, if that definition is met by the evidence against him, whether the “honest services” fraud law and the Hobbs Act are unconstitutional.  That issue, the petition suggested, relates directly to whether an elected official has First Amendment rights to communicate with those who are political supporters.  Second, they urged the Court to review their claim that the trial judge failed to adequately question potential jurors about their reaction to the heavy publicity that surrounded his prosecution.

When the Court granted review in McDonnell’s case on January 15, it limited the review to the first question only.

The debate among the modest list of amici who have entered on both sides of the case mainly involves, on McDonnell’s side, groups which share his view that corruption must be narrowly confined to deliberate use of specific government action to avoid criminalizing political activity, and, on the government’s side, groups that are strongly critical of the current system of campaign finance, believing that it contributes to the corrupting of government officials who depend upon that system.