The oral argument yesterday in Cuozzo Speed Technologies v. Lee did not clarify much about the case, but it did suggest that the Justices will not be composing a paean to the deftness of congressional drafting. All who spoke seem mystified that Congress could pass such an important piece of legislation with no attention to some of the most basic questions that it poses for the courts and agency that must implement it.

The case involves “inter partes review,” a new procedure for dealing with dubious patents adopted in the 2011 Leahy-Smith America Invents Act. Instead of waiting for a court to resolve a suit attempting to enforce a dubious patent, a competitor can take the patent straight back to the Patent and Trademark Office (PTO) and institute a proceeding to have the patent cancelled there. The statute creates a new entity in the PTO, the Patent Trial and Appeal Board (PTAB) to rule on them. 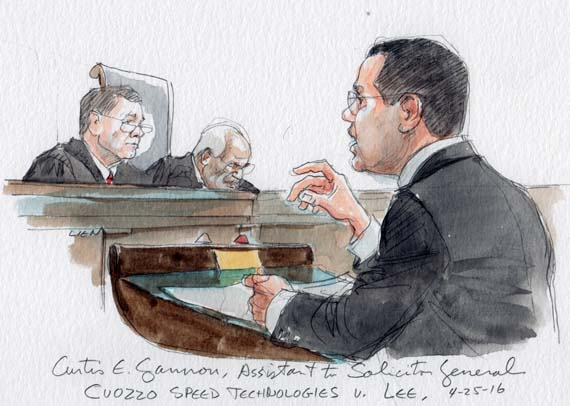 What Congress did not mention, though, was the standard for assessing the validity of the challenged patents. Before it issues a patent, the PTO considers applications under a “broadest reasonable interpretation” (“BRI”) standard: if the broadest reasonable interpretation of the application’s claims conflicts with prior inventions, the patent will not issue; the applicant typically amends the claims to avoid the prior art and tries again. In litigation, courts apply an “ordinary meaning” standard: if the ordinary meaning of the claims brings them into conflict with prior inventions, then the claims are invalid and the patent is invalidated. The PTAB has decided that it should use the BRI standard in inter partes review proceedings, just as the PTO traditionally has used that same standard in assessing applications. Applying that standard, it has been aggressive in invalidating a large share of the patents that it has evaluated.

Patent holders, predictably, are upset at a system that has shifted the terms of engagements away from courts and into an agency that has shown itself so quick to retract patents. They argue that the PTO should apply the same ordinary-meaning construction that always has been the standard for cancellation of a patent that already has issued. As a matter of process, they point out that it makes little sense to apply the BRI standard in a post-issuance context, in which the patent holder no longer has the free ability to amend claims to resolve concerns about potential overreaching. Defendants (and the PTO), on the other hand, view the process as an extension of the traditional process of examining applications, with application of the traditional BRI standard the only logical outcome.

The argument was dominated by the sense that Congress has offered no guidance whatsoever as to which vision of the process makes the most sense. As Justice Elena Kagan suggested early on, “if I look at the statute, I mean, it just doesn’t say one way or the other. So we’re a little bit reading tea leaves, aren’t we?” 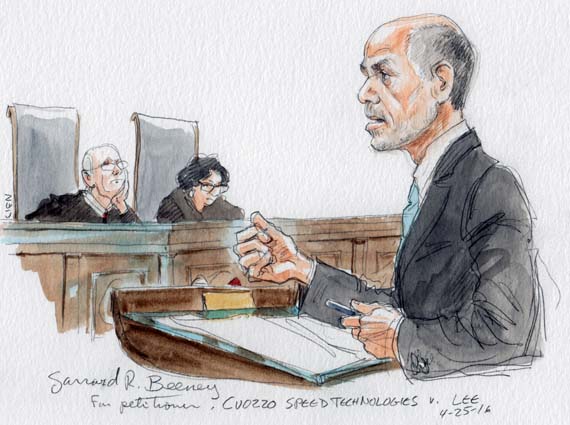 Listening to Garrard Beeney arguing (on behalf of patentholder Cuozzo Speed) for an ordinary-meaning standard, Justice Stephen Breyer offered an extended soliloquy in the same vein about the difficulty in choosing between alternate readings of the statute.

You could look at this new law as trying to build a little court proceeding. If I thought it was just doing that, I would say you were right. But there is another way to look at it. And the other way to look at it … is that there are these … patent trolls, and that the Patent Office has been issuing billions of patents that shouldn’t have been issued; I overstate, but only some. And what happens is some person in business gets this piece of paper and looks at it and says, “Oh my God, I can’t go ahead with my invention.”

So what we’re trying to do with this process is tell the Office you’ve been doing too much too fast. Go back and let people who are hurt by this come in and get rid of those patents that shouldn’t have been issued. … If it’s that second purpose, then I would think maybe this is right, what they’re doing. And if it’s ambiguous between those two purposes, I would begin to think, well, maybe they should have the power themselves under Chevron, Meade, or whatever, to decide which to do.

The irony of Justice Breyer’s take on congressional intent is notable. BECAUSE Congress thinks you’ve done such a bad job of determining when to issue patents, we should DEFER to your judgment on how to fix the problem.

Further supporting the PTO’s choice of the BRI standard is the regular use of that standard in the PTO proceedings existing when Congress devised inter partes review. As Justice Kagan remarked, “[i]f I’m trying to put myself in Congress’s position, I’m looking at the PTO, and it does pretty much everything by this broadest-construction standard. And if I had the clear intent that you’re suggesting, given the backdrop of how the PTO currently operates, wouldn’t I say so?”

At the same time, the Court was just as troubled about the oddity of the process that the PTO has devised. Because the PTAB standard on inter partes review is so different from the standard that courts apply in infringement litigation – so much more likely to invalidate the patent – the tension between PTAB and judicial proceedings is inescapable. Chief Justice John Roberts was particularly troubled by the problem. Noting that “the district court [seems] free to disagree with the PTO reading of the patent,” he imagined how easy it would be for a district court to reach a contrary conclusion. His summary of how a trial court might think about such a case underscores his concerns:

I appreciate the fact that you [i.e., the alleged infringer] think this agency thinks th[at the patent is invalid], but my responsibility is to decide this case according to the facts and law, and I disagree with the PTO’s reading. …. I understand what PTO thinks the scope of the patent is, but my responsibility is to interpret it pursuant to a different standard, and under my standard I have a different result.

Concerned about that process, he asked rhetorically: “So if the district court interprets the patent, is that binding on the PTO? And if the PTO interprets the patent, that’s not binding on the district court?” For the Chief Justice at least, that process may be too much to swallow: “I’m sorry. It just seems to me that’s a bizarre way to decide a legal question. … And this is under a statute designed to make the patent system more reasonable and more expeditious in reaching judgments?”

So I don’t think it is easy to sort out what the Court will do. The balance of the questioning suggested at once that the PTO has implemented what Congress wrote in a plausible way and that the resulting system is harebrained at best. In the end, then, the Court may simply leave it to the PTO to make the best of it and let Congress step in to tweak the system if it sees fit.

[Disclosure: Goldstein & Russell, P.C., whose attorneys contribute to this blog in various capacities, is among the counsel on an amicus brief by Intellectual Ventures Management, LLC., in support of the petitioners in this case. However, the author of this post is not affiliated with the firm.]