A “view” from the Court: Status pending

It’s the last two-week argument session of the Term, and today is the biggest of the last group of cases: United States v. Texas, about the Obama administration’s deferred-action program for specified undocumented immigrants.

A raucous demonstration by supporters of both sides of the immigration debate fills the sidewalk in front of the Court, and even spills onto First Street Northeast. Inside, decorum prevails as the seats fill with Cabinet secretaries, members of Congress, foreign dignitaries, and lots of regular spectators. 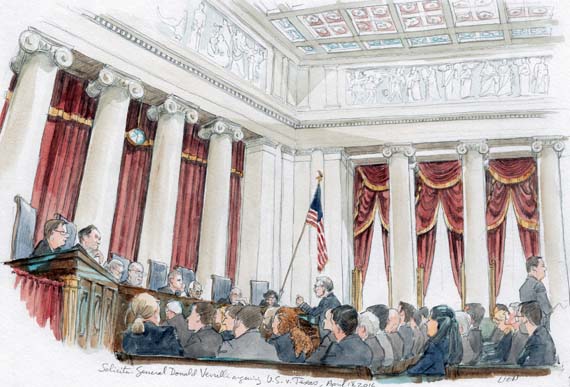 Sen. Richard J. Durbin, Democrat of Illinois and assistant minority leader in the Senate, is in the Courtroom, as is his Democratic colleague from the Illinois delegation, Rep. Luis V. Gutiérrez. Sen. Robert Menendez, Democrat of New Jersey, is here, too. Rep. Xavier Becerra and Rep. Zoe Lofgren are two Democrats here from the California delegation.

Near the press section, we spot one of Castro boys. Not Fidel or Raúl, but Joaquín or Julian. Julian is the secretary of the Department of Housing and Urban Development. His identical twin brother, Julian, is a Democratic congressman from Texas. I’m sure they are always playing tricks like having Julian go to a Cabinet meeting while Joaquin goes to the House floor to vote on post office designations. We eventually figure out that it is the congressman here today.

It’s not clear how many, if any, congressional Republicans are here. Rep. Steve King of Iowa, a stalwart critic of the president’s policies, posted on his Facebook page that he addressed the immigration demonstration outside the Court while the arguments went on inside.

Texas Attorney General Ken Paxton, notwithstanding his busy personal and professional legal plate, is here to support his solicitor general, who will argue the state’s case. Also in attendance are the Republican attorneys general of three other states in the lawsuit: Luther Strange of Alabama, Doug Peterson of Nebraska, and Scott Pruitt of Oklahoma.

Doris Meissner, the commissioner of the Immigration and Naturalization Service under President Bill Clinton, has a prime seat in the center of the public gallery, fresh after appearing on C-SPAN this morning to explain the background of the case. But at about 9:45 a.m., a Court aide asks Meissner, now with the Migration Policy Institute, and her party to move to slightly less prominent seats.

That prime row, and the first center row of the public gallery, which usually remains empty during arguments, are soon filled with dignitaries from north of the border.

At 10 a.m., the Justices take the bench, and Chief Justice John G. Roberts, Jr., announces that “we are very pleased to welcome the Chief Justice of Canada, Beverley McLachlin, and other members on the bench of that court.”

It’s not clear how many of the nine-member Supreme Court of Canada are here with McLachlin. Perhaps they will look around the courtroom and contemplate where cameras might be installed, since the Canadian court’s proceedings are televised. (We’re not sure how long the Canadian justices are in town, but we do know that they will not be missing any National Hockey League playoffs of their capital city’s Ottawa Senators or any of Canada’s six other NHL teams. For the first time 1979, no Canadian team made the Stanley Cup playoffs.)

Chief Justice Roberts moves on to the matter that has the press perplexed: An opinion announcement on a Monday when there is an oral argument is outside the norm, so why is there an opinion slated for today?

A few sharp legal observers have suggested, in advance, that in one pending case, Welch v. United States, issuing a decision today could be significant.  That’s because, if the Court were to rule that last Term’s decision in   applies retroactively, it would guarantee that some prisoners could file habeas petitions within a year of when the Court issued its decision in Johnson. (Though since the decision came out last June, it’s not clear why one extra day matters.)

In any event, the opinion is indeed in Welch, with Justice Kennedy writing for the Court that Johnson did announce a new substantive rule that has retroactive effect in cases on collateral review. The vote is seven to one, with Justice Clarence Thomas dissenting.

With that, the extended arguments in the immigration case begin. U.S. Solicitor General Donald B. Verrilli is making what may be his last major argument on behalf of President Barack Obama’s administration. Verrilli presses his arguments that Texas has no standing to challenge the Deferred Action for Parents of Americans guidance, and that on the merits, the president acted within his authority.

One key exchange involves Roberts and Justice Samuel A. Alito Jr. questioning Verrilli about an apparent contradiction in his reply brief.

On one page, Roberts points out, Verrilli quotes the DAPA guidance as saying, “”The individuals covered are lawfully present in the United States.”

“And less than a page later, you say, ‘Aliens with deferred action are present in violation of the law.’ Now, that must have been a hard sentence to write,” the Chief Justice says.

“I actually had no trouble writing it, Mr. Chief Justice,” Verrilli says to laughter in the courtroom. The phrase ‘lawful presence’ “has caused a terrible amount of confusion in this case,” he adds, but it has a nuanced meaning in the “immigration world.”

“What it means in the immigration world is not that you have a legal right to be in the United States, that your status has changed in any way [or] that you have any defense to removal. It doesn’t mean any of those things, and it never has.” Verrilli says. “At that fundamental level, we are not trying to change anybody’s legal status.”

“Lawfully present does not mean you’re legally present?” Roberts asks him. Twice, with Verrilli standing by the distinction.

Verrilli says this distinction already exists for millions of people other than the potential DAPA recipients.

Verrilli soon suggest that if the Court thinks the reference to “lawful presence” in the DAPA guidance “is a problem and wants to put a red pencil through it, it’s totally fine.”

While the term has some “technical legal significance” for Social Security benefits, the concern over the phrase, he suggests, “is the tail on the dog and the flea on the tail of the dog.”

Verrilli is followed by the lawyer representing three women – potential DAPA recipients who intervened to support the president’s program. Thomas A. Saenz of the Mexican-American Legal Defense and Educational Fund is making his first argument before the Supreme Court.

Even with just ten minutes of argument time, he told C-SPAN this morning that he would be nervous. He discusses the three “Jane Does,” who “seek the opportunity to apply for discretionary, temporary and revocable relief from the daily fear that they will be separated from their families and detained or removed from their homes” under current law.

The Jane Does are not here today, a MALDEF representative says later.

Scott A. Keller, the Texas solicitor general, is making his third argument before the Justices just this term. He says that “DAPA is an unprecedented unlawful assertion of executive power. DAPA would be one of the largest changes in immigration policy in our nation’s history.”

He is quickly interrupted by Justice Sonia Sotomayor, who seems to want to stress the human dimension of the immigration debate and the lack of action by Congress.

“Here, we have a Congress that’s decided­—some members of the Congress have decided they don’t like [immigration legislation], and so Congress has remained silent,” she says.

Keller says that Congress has to grant statutory authority first for the executive to be able to act, and “to do so, on a question that’s of this deep economic significance, it would have to do so expressly.”

Sotomayor says, “You know, you keep saying that, ‘deep economic significance.’ Those nearly 11 million unauthorized aliens are here in the shadows. They are affecting the economy whether we want to or not.”

Erin E. Murphy of the Bancroft law firm is here to represent the House of Representatives, as voted by the Republican majority, and she has fifteen minutes.

“Three years ago the Executive asked Congress to enact legislation that would have given it the power to authorize most of the people that are living in this country unlawfully to stay, work, and receive benefits, and Congress declined,” she says. “Now the Executive comes before this Court with the extraordinary claim that it has had the power to achieve the same …”

Murphy was soon interrupted, with questions about the multiple federal statutes and existing immigration regulations that make the debate all the more complicated.

Throughout the ninety-minute argument, there is no mention of the issue the Court asked for briefing on, whether the DAPA guidance violates the “Take Care” clause in Article 2 of the Constitution.

In his rebuttal time, Verrilli stresses that the states’ constrained view of “deferred action” would affect the work authorizations not just for potential DAPA recipients but for millions of other aliens in other categories, such as “proceedings for adjustment of status” and those who are in “proceedings for cancellation of removal.”

How many people are we talking about with those categories, the Chief Justice asks.

As the Justices retreat behind their curtain, the status of millions of undocumented aliens targeted by the DAPA program remains “pending.”