Argument preview: Once again, the issue is race (UPDATED)

UPDATED Wednesday, March 16, 4:57 p.m.:  The Court has added ten minutes of time to the argument in this case next Monday, for a total of seventy minutes.  The attorney for the lawmakers will have thirty-five minutes.  Thirty-five minutes on the other side will be divided among counsel for the two voters (fifteen minutes), with ten minutes each for counsel for the Virginia State Board of Elections and the U.S. Solicitor General’s office.

More than halfway through the latest cycle of redrawing election districts after the 2010 census, the Supreme Court is still trying to sort out when those who draw the map rely too heavily on the race of the voters.  It will be doing so in a case that  has been to the Court once before, but the case may not even produce a decision this time on the key issue: the validity of a Virginia district for a single seat in the U.S. House of Representatives.

Next Monday, March 21, the Court will hold one hour of oral argument on Wittman v. Personhubullah.  The case reached the Court again in an appeal by all eight of Virginia’s current Republican members of the House (together with two others who no longer are in the state’s delegation but continue to be named).  The lawmakers are seeking to defend the constitutionality of District 3 under the 2012 plan, which was struck down as a “racial gerrymander” in a split decision by a three-judge federal district court last June. 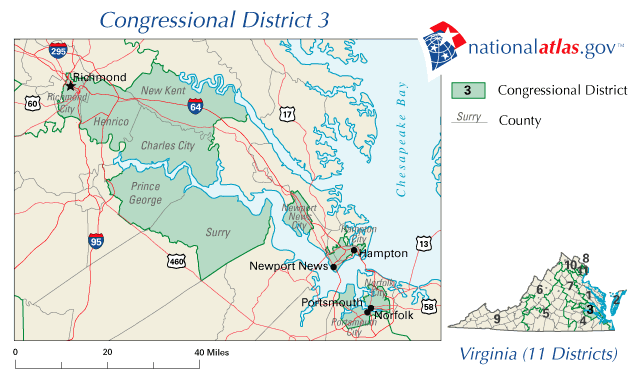 Actually, that lower court has twice nullified the 2012 plan for District 3.  Then, when the legislature last year could not agree on a replacement, the court fashioned a new one on its own.  Adding to the strangeness of this case, the court-drawn map is the one that will be used in this year’s June 14 primary and November 8 general elections in Virginia, under an order by the Supreme Court last month.

The map drawn by the lower court is not being reviewed by the Justices now.  If the 2012 plan were to be upheld by the Justices, then that plan would go back into effect for elections after this year.

A final, clear-cut decision is not assured, for two reasons.

First, the Court hearing the case will have only eight members, which almost always raises at least the possibility of a four-to-four split.  However, the last time the Court ruled on a “racial gerrymandering” case, one year ago, against state legislative districting in Alabama, the vote was five to four, and the late Justice Antonin Scalia was among the dissenters.  If there were now to be a four-to-four split, that would simply leave the district court ruling intact, setting no precedent and with no Court opinion.  The 2012 plan would be dead for future elections.

Second, and maybe more significant, is that the Court has not yet concluded that the present and former members of Congress had a right to enter the case (“standing to intervene”) to take a position on the shape of a district in which they do not live and which they do not or did not represent.  Before agreeing to take on the case, the Court asked for further legal briefs on the “standing” question and, when it voted for review last November, it ordered additional briefing on that issue and indicated that it would remain open to be explored at the hearing.

District 3 is the only one in Virginia that has a majority of African-American voters, as it has had from its initial creation in 1991 as a remedy for a previous redistricting scheme that was nullified as racially discriminatory.  It has always been represented by Rep. Bobby Scott, an African-American Democrat.  He is not involved in the case at the Court, even though it is his district that is at the center of the constitutional controversy.  (The 2012 map was challenged in a lawsuit by three Virginia voters.  One has since dropped out.  The other two, Gloria Personhuballah and James Farkas, remain.)

After the lower court first ruled against the map for District 3, the Virginia Republican lawmakers pursued an appeal to the Supreme Court.  After the Justices had decided the Alabama state redistricting case, the Court told the judges in Virginia last March to reconsider, taking the Alabama ruling into account.  Again dividing two to one, the lower court once more found that plan to be an invalid “racial gerrymander.”

It is not clear that the new Virginia case, even if it results in a final decision on the merits, will add much if anything new to constitutional law governing racial gerrymandering.  The law in that area is quite well-established.  Racial gerrymandering means, according to the precedents, that a legislature has used the race of voters as the “predominant factor” in drawing up new election boundaries, overwhelming other factors that traditionally go into redistricting.

Race can be used in redistricting, the Court has said, if its use was based on political reasons, such as protecting incumbents from losing their seats or respecting political party alignments in a House delegation, but those reasons do not justify the use of race when it has been the predominant factor.

When the Virginia legislature passed the 2012 plan, legislative leaders said that was done to satisfy the requirement of the federal Voting Rights Act of 1965 that new plans may not diminish the voting strength of minorities when they go to the polls.  But, even if that was the legislature’s motive, it still is forbidden to draw new district lines when race was the predominant consideration that actually guided them.

When District 3 was first created in 1991, its population of African Americans of voting-age was slightly over 61 percent.  After the 2000 federal census, that share of the population had dropped to 53.1 percent.  The 2012 plan raised it to 56.3 percent.  Among other reasons used by the district court majority in nullifying the 2012 plan, it said that an increase of more than three percentage points was not needed to protect minority voting strength in District 3.

Those are the questions that the Justices will seek to answer, if they first conclude that the present and former members of the House do have “standing” to pursue the case.

The “standing” issue is crucial because the present and former lawmakers are the only ones seeking to defend the 2012 plan, since state officials who formerly did so have switched sides, and now join in the argument that the plan is invalid.

The Court, however, has received sharply conflicting advice on the “standing” question.

The lawmakers argued that they will be adversely affected by substitute plans, because significant numbers of Democrat voters would be moved into their districts, diminishing their chances in future elections.  (That is a claim that the former lawmakers, too, had previously made in the case.)

One of the current GOP members, Rep. Randy J. Forbes, who represents District 4, has asserted that changes in the 2012 plan would make his district one with a Democratic majority, undermining his chances of reelection in the future.

The voters who challenged the 2012 plan told the Court that none of the lawmakers has “standing,” because their claims of future risks were merely speculative.

The state Board of Elections and other state officials have conceded that Rep. Forbes does have “standing,” because of the new Democratic voter majority that would be a feature of District 4.  Under the doctrine of “standing,” if one party has a right to pursue the case, it can go forward with others who had not shown that they, too, qualify.

The Obama administration has entered the case on the side of the challenging voters.  It contended that none of the lawmakers had shown they have “standing.”  It argued that no one has any right to keep specific voters out of a specific district.  On the validity of the 2012 plan, the government argued that it should be struck down.

At next Monday’s hearing, which begins at 10 a.m., the U.S. Solicitor General’s lawyer will share some of the time of the challenging voters.  The lawmakers will have their own time for their attorney.