Argument analysis: What does incumbency mean when the election is held?

For a little more than a year, the Supreme Court has been pondering what to do about a potentially significant case over the use of race in drawing new maps for election districts.  But, at every step along the way, it has seemed troubled that maybe no one had a genuine legal stake remaining in the outcome, so maybe it did not have the authority to decide it as a “live” controversy.

That  concern came fully into the open on Monday as the Court held a seventy-minute hearing on the case of Wittman v. Personhuballah — a congressional redistricting case that is supposedly focused on whether Virginia’s District 3, as drawn by the state legislature in 2012, was the result of an unconstitutional “racial gerrymander.”  The hearing, though, revealed that the Court is actually deeply puzzled about what it means to protect incumbents — politicians already in office and looking to be reelected.  If they don’t have a legal guarantee or right to assured reelection, and no one says they do, do they at least have some kind of legal claim not to have reelection made harder or, indeed, put out of their reach?  If so, how is that different from a reelection promise enforceable in court? 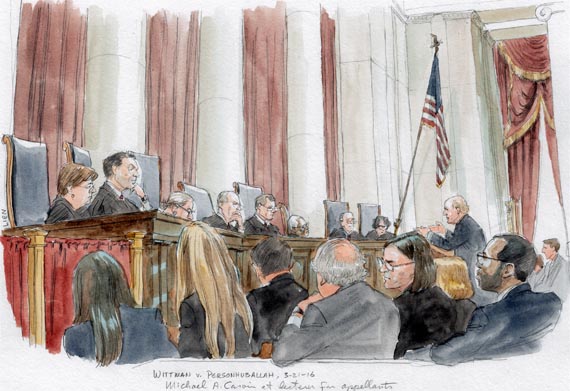 The Court has said often that, when lawmakers are doing redistricting, it is entirely legitimate for them to have as one of their goals protecting “safe seats” for those already holding those seats.  That, according to the court, is a legitimate political objective — at least until the day, perhaps still far off, that the Court condemns “partisan gerrymandering.”  (It has not done so up to now, because it can’t figure out a formula for judging when partisanship has become too partisan).

But just what does incumbent protection entail?   The Justices heard, from a lawyer representing incumbents, that it should at least mean that an incumbent’s district should not have pushed into it so many voters of the opposite political party that a reelection candidacy would be (in that lawyer’s word) “doomed.”  Washington, D.C., attorney Michael A. Carvin represents several Virginia GOP incumbents, including Rep. Randy J. Forbes, who has had a virtual lock on District 4 for sixteen years.  And Forbes’s future as a candidate became very much a centerpiece of Monday’s argument.

After a federal trial court ruled that District 3, with boundaries created by the state legislature, was invalid as a “racial gerrymander,” that court drew up an alternative plan for the state delegation as a whole and part of that was to turn neighboring District 4 into a potential stronghold of Democratic voters.  Instead of District 4 being “safe” for Forbes, it would now have a sixty-percent Democratic voter share.

Indeed, that was so threatening to Forbes that he has decided that he will run instead this year in another nearby constituency, District 2, where his chances seem markedly better.  But if the Court were to uphold the legislature’s 2012 map. putting it into effect, then Forbes would seek his seat back in District 4, Carvin told the Court.

As Carvin spelled out his theory of incumbent opportunity, making sure he was not claiming an absolute right of incumbent reelection as a necessary part of a redistricting effort, he encountered heavy skepticism for what he insisted he was seeking: that is, a “legally cognizable interest” in not having his reelection chances taken away as rudely as with Rep. Forbes. That lawmaker, the lawyer said repeatedly, has suffered “an injury in fact,” sufficient to allow him to be in court to challenge the court-drawn plan.

Carvin frequently spiced up his complaint about the court-drawn plan by referring to it as an effort by the federal judiciary to “hijack” a state’s political process, snatching it away from the people’s elected representative.  (In that effort, of course, he was making a harshly worded reference to the Court’s long-time view that, in redistricting as a general proposition, it is better for legislatures than for judges to be drawing the election boundaries.

The skepticism that Carvin’s argument encountered came most vividly from Justice Elena Kagan, but Justice Sonia Sotomayor was almost as concerned about where those suggestions might be leading in constitutional doctrine.  Justice Stephen G. Breyer seemed more puzzled than troubled, but, he too, wondered where Carvin was taking the argument.  Justice Ruth Bader Ginsburg did not seem inclined in favor of such points, either, and Justice Anthony M. Kennedy exhibited some doubts, too.

Carvin appeared to have drawn noticeable support from Justice Samuel A. Alito, Jr.  Chief Justice John G. Roberts, Jr., did not show his hand very plainly, but was somewhat more energetic in questioning lawyers on the other side of the case — those representing the voters who challenged the legislature’s 2012 plan, the state board of elections, and the Justice Department as an amicus supporting the voters.

The election board’s lawyer, state solicitor general Stuart A. Raphael, did support Rep. Forbes’s claim to a right to be in court to defend the 2012 plan but, on the merits, said the legislature’s plan was, indeed, an invalid racial gerrymander.

The other two lawyers taking the lectern — Washington attorney Marc E. Elias for the voters and Deputy U.S. Solicitor General Ian H. Gershengorn for the federal government — belittled Carvin’s claims about incumbent opportunity, dismissing them as, in essence, a claim by candidates to choose their own voters, instead of the other way around.

Justice Clarence Thomas said nothing during the hearing.

With only eight Justices now on the bench, it seems possible that there could be a four-to-four split, unless Kennedy were to line up with the four skeptical liberals  If there were a four-to-four split, that would simply uphold — without an opinion by the Justices — the federal court decision striking down District 3 as a “racial gerrymander.”