Argument analysis: If only Congress had taken the time to explain . . .

With only three members of the Supreme Court taking a genuinely active part in a hearing Tuesday on Puerto Rico’s debt crisis, and with those three ultimately reinforcing each other’s arguments, it might have been thought it would be fairly easy for them to control the outcome of the case just among themselves.  And if, as seemed quite likely, they could pick up a fourth vote, they could surely prevail, since only seven Justices were on the bench.

But the argument in Puerto Rico v. Franklin California Tax Free Trust and a companion case was a truly labored exercise, made considerably harder because Congress had not explained itself at all (let alone clearly) in 1984 when it decided to treat Puerto Rico differently in bankruptcy law.  It seems that, as part of an overhaul of the federal bankruptcy code, Congress simultaneously shut Puerto Rico’s public utilities out of a right to sue for bankruptcy under federal law but forbade the Puerto Rico legislature to come up with its own debt-restructuring plan.

There is, though, no legislative history associated with that action, and there is no other persuasive source in legal writings or logic to look for an explanation, so the answer has to be found in the truly inscrutable legislative language.

The legislative aim, indeed, was apparently so uncertain that Justice Elena Kagan, one of those most involved in the hearing, confessed that she had come to the hearing inclined to vote against Puerto Rico but had been, in essence, converted.  It wasn’t that she was so totally brought around by Puerto Rico’s lawyer as that she thought it was close to a toss-up, and the points in favor of Puerto Rico somehow were coming out better than the points against.

Justice Sonia Sotomayor fretted anxiously, and frequently, that Puerto Rico was being made to suffer a deep congressional insult to its sovereign authority to run its own financial affairs.  And Justice Stephen G. Breyer went through a series of almost metaphysical explorations of legislative possibility, which appeared to have inclined him in Puerto Rico’s way in the matter.

Those three had the argument largely to themselves, but they would be entitled to assume that Justice Ruth Bader Ginsburg, who took only a small part, might well help them make a fourth and thus a majority for Puerto Rico.  Ginsburg wondered aloud, in what seemed like considerable anguish, “Why would Congress put Puerto Rico in this never-never land?  . . . What explains Congress wanting to put Puerto Rico in this anomalous position of not being able to restructure its debt?”

Chief Justice John G. Roberts, Jr., had an even smaller part, and Justices Anthony M. Kennedy and Clarence Thomas said nothing.  (The eighth current Justice, Samuel A. Alito, Jr., has taken himself out of the case, apparently because of some of his investments.  Much of the Puerto Rican public utilities’ debt is in the form of tax-free bonds, held by a wide variety of investors who have been resisting Puerto Rico’s efforts to restructure its utilities’ debts on terms that investors deem unattractive.  The late Justice Antonin Scalia’s seat remains vacant.)

In that part of the 1984 bankruptcy revision at issue before the Court, Congress also chose to treat the District of Columbia government as unfavorably as it did Puerto Rico in dealing with local debt crises.  And, while it went entirely unmentioned during Tuesday’s hearing, those who are in the know about how Congress has generally reacted to the two jurisdictions say that the lawmakers believe that the two governments are quite incapable of fiscal discipline.

That same sentiment of mistrust appears to be at work again, as Congress is considering various proposals to try to provide a solution for Puerto Rico’s debts, but the prospects of something emerging in a final way apparently are not promising.  That may well mean that, for the time being, the Supreme Court is Puerto Rico’s only hope of finding a way to manage, if not to eradicate, its mountain of obligations to its utilities’ bondholders. 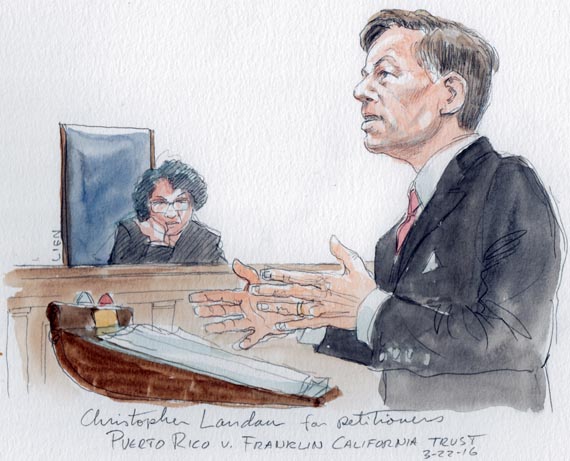 Puerto Rico’s attorney in the case, Washington, D.C., lawyer Christopher Landau, kept the three active Justices largely satisfied with his answers to their questions, regularly reinforcing the basic notion that the 1984 provision for Puerto Rico lacked any rationale.  He fashioned a way to read the bankruptcy code so that, once Congress chose to shut the “gateway” to municipal government bankruptcy filings, it had left the commonwealth to its own devices and, indeed, promised (in another provision) that it was not disrupting Puerto Rico’s power to deal with crises facing its public utilities.

Matthew M. McGill, the Washington lawyer speaking for the bond-holding creditors, sought to persuade the Justices that the 1984 revision was not a major shift in bankruptcy law, but was really only another instance of Congress “micromanaging Puerto Rico’s debt,” part of “a long history of intervening” in the island’s fiscal affairs. 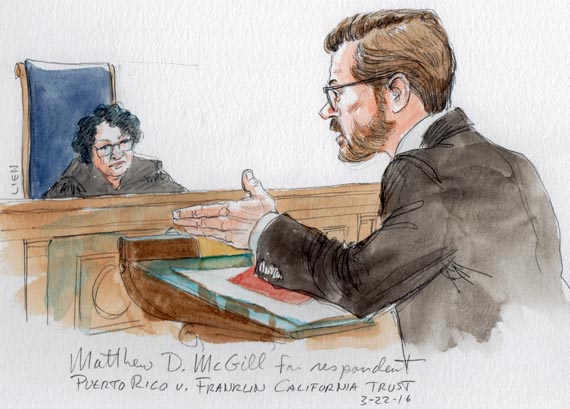 As he spelled out that rationale, Justice Kagan told McGill that both he and Landau, on the other side, had offered the Court “stories” about what Congress might have had in mind.  She noted Justice Breyer’s efforts to make sense of the legislation (mostly in Puerto Rico’s favor), and Landau’s offering of his own version, and she asked: “Why aren’t those better than yours?  I didn’t think that coming in.  Now I think it.”

Coming in the midst of a truly bewildering recitation of subsection and sub-subsection provision of the bankruptcy code, her comment had the refreshing effect of trying to simplify the controversy, even if she were not intentionally promising Puerto Rico that it would win.