A “view” from the Courtroom: Sister Act

Any graduate of Catholic elementary school or CCD (that’s Confraternity of Christian Doctrine, or religious training for public school Catholics) might be trembling a bit upon entering the Supreme Court this morning.

The first person they might see is Cardinal Donald Wuerl, the archbishop of the Roman Catholic Archdiocese of Washington. Just about a month ago, Wuerl helped preside over the funeral mass for the late Justice Antonin Scalia at the Basilica of the Shrine of the Immaculate Conception. 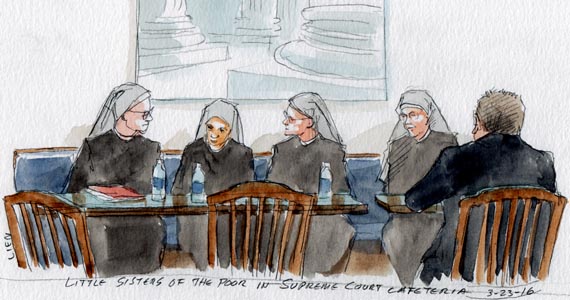 All three are the leaders of church-affiliated entities that are involved in today’s case, Zubik v. Burwell, about objections by certain non-exempt religious employers to the complying with the contraceptive-services mandate that stems from the Affordable Care Act.

Among the seven consolidated cases on this issue is Little Sisters of the Poor Home for the Aged v. Burwell, and we also see in the public gallery three members of that religious order that is dedicated to living among and serving the elderly poor. A few minutes before arguments begin, four more members of the order are ushered in

There are other priests and monks scattered through the public gallery. 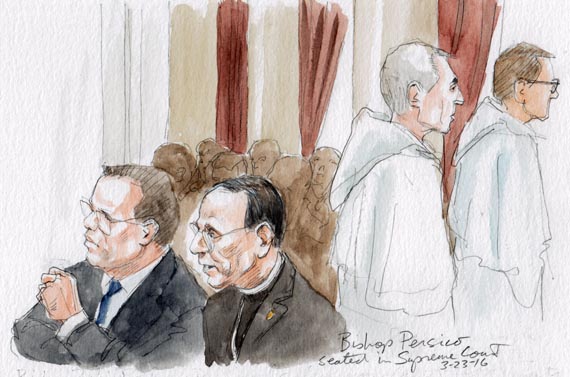 Not present today, so far as we can see, are any high-ranking members of President Obama’s administration. Top White House aides and two secretaries of the Department of Health and Human Services have attended the Court’s ACA-related cases in recent years.

At 10 A.M., the Justices take to the bench in what is now the third day of their new positions since the mourning period for Justice Scalia ended last week. All but Chief Justice John G. Roberts Jr. switched their positions, and the ninth place of seniority on the bench will remain without a chair until a successor to Scalia is confirmed.

As usual, bar admissions are the first order of the day, and today’s admittees include a member of Congress, Rep. Keith Rothfus, a Republican from Pennsylvania. His presence may be explained by the fact that he is from the Pittsburgh area and has a law degree from the University of Notre Dame, which had challenged the contraceptive mandate in an earlier case. He also gets a really good, front-row seat in the bar section.

Seated with Rep. Rothfus is Rep. Louie Gohmert, Republican of Texas, who is not being sworn in today but, oddly, is in the section with those who are.

Barely a half-hour into the argument, a Court aide will inform Rothfus that there is a pending vote for which is presence is sought, and he will depart. Rep. Gohmert does not leave.

Also being sworn into the Supreme Court Bar today is Josh Blackman, an associate law professor at South Texas College of Law in Houston, and a frequent commentator on the work of the Court, particularly on the Affordable Care Act cases. (And his blog points out that today is the sixth anniversary of the day the president signed the ACA into law.)

The Chief Justice calls Zubik v. Burwell and “consolidated cases,” as is customary, for argument. The captions of the seven cases fill two pages of the Court’s “day call.”

Paul D. Clement, a veteran of ACA cases, will argue for 25 minutes for Little Sisters of the Poor and some of the other challengers. He will, perhaps understandably, focus on the Little Sisters, who do not qualify for the outright exemption the ACA rules provide to churches, “integrated auxiliaries,” and religious activities of religious orders.

The Little Sisters do not qualify for the religious-order exemption because they don’t just “stick to their knitting” but go out and serve the elderly poor on a non-denominational basis, Clement says.

Clement will spar with members of the Court’s liberal bloc—Justices Ruth Bader Ginsburg, Stephen G. Breyer, Sonia Sotomayor, and Elena Kagan—on many of the complex issues raised in the case.

But the veteran Supreme Court litigator knows to reserve some of his time for rebuttal.

“I reserve my time,” he says near the end of his 25 minutes, just as Justice Sotomayor tries to jump in with another question.

The Chief Justice, perhaps mindful of the perception during February’s arguments in the abortion case, Whole Women’s Health v. Hellerstedt, that questioning and time limits spiraled out of control, cuts Sotomayor off by saying, “Thank you, counsel.”

Noel J. Francisco is next up, representing a different set of religious employers, including some schools and other entities under the Archdiocese of Washington and the Dioceses of Pittsburgh and Erie. Cardinal Wuerl and Bishops Zubik and Persico perk up in their seats a bit.

During Francisco’s time, Justice Kagan refers to an amicus brief filed by Douglas Laycock, an eminent scholar of law and religious studies at the University of Virginia, on behalf of the Baptist Joint Committee for Religious Liberty. Laycock, a leading proponent of the Religious Freedom Restoration Act, took the view two years ago that Hobby Lobby and other closely held companies could raise a RFRA objection to the contraceptive mandate, but he takes a different position in this case.

“There are some people who are extremely strong RFRA supporters who have deserted this cause right here, Professor Laycock among them, because of the mortal danger that it poses to churches,” Justice Kagan tells Francisco.

Laycock will be mentioned several more times, but the professor, who has argued before the Court himself, is not here to hear it. He did not make the drive from Charlottesville, Va., today.

U.S. Solicitor General Donald B. Verrilli Jr. is here for the Obama administration, and he has 45 minutes to himself.

He is soon confronted by the Chief Justice with a term uttered earlier by Clement, who had said the government wants “to hijack our health plans and provide the [contraceptive] coverage against our will.”

Roberts tells Verrilli: “The petitioner has used the phrase ‘hijacking,’ and it seems to me that that’s an accurate description of what the government wants to do.”

Justice Anthony M. Kennedy will seize on the word later, questioning why the government finds it “necessary to hijack the plans.”

And Justice Sotomayor will come to Verrilli’s aid. “The hijacking analogy has been mentioned. Can you explain why you don’t see this as a hijacking?”

There is so much discussion of “hijacking” that one hopes the lawyers don’t recount the argument while in conversation on an airplane.

Meanwhile, both Justice Samuel A. Alito Jr. and Chief Justice Roberts take little digs at the operation of the health-insurance exchanges under the ACA.

Alito asks Verrilli about whether a female employee of a religious organization to go on her state exchange to purchase a separate contraceptive policy.

“What type of a burden does that impose?” Alito says. “Is it because these exchanges are so unworkable, even with the help of a navigator, that a woman who wants to get free contraceptive coverage simply has to sign up for that on one of the exchanges?”

Roberts, taking issue with Verrilli’s argument that requiring women to go to the exchanges for separate contraceptive policies would undermine the goal of easing their access to such care, seemingly couldn’t resist this little shot.

“You said, yes, it’s a hassle to go the exchange,” Roberts said, “although it’s — you know, I’ve heard about how easy it is.”

When the arguments end, the Little Sisters’ PR handlers will quickly usher the eight sisters from the courtroom to join others for the media scrum outside on the Court’s plaza, and then to a cheering crowd of several hundred Catholic schoolchildren and other women religious on the sidewalk.

For today, at least, the Little Sisters have hijacked the attention.