The late Justice Antonin Scalia is at the forefront of everyone’s minds this week. While his jurisprudence and his legacy have been ably (and extensively) analyzed elsewhere, we wanted to take a moment to highlight Justice Scalia’s exceptionally energetic speaking itinerary. Since the launch of SCOTUS Map in July 2014, we tracked fifty appearances for Scalia (out of 311 total events prior to his death). 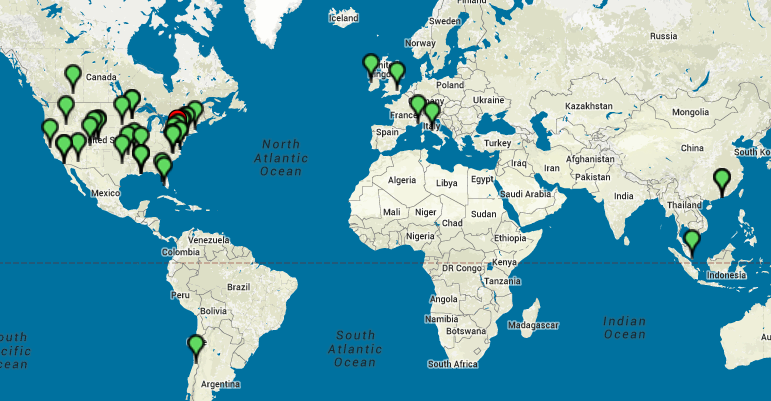 More than any other Justice, Scalia made an effort to travel as widely as possible. He brought his trademark wit and spirited advocacy of originalism and textualism to a variety of locales both geographically and culturally far from One First Street – dazzling audiences in Tennessee, Idaho, Louisiana, California, Italy, Chile, Ireland, and Singapore. Several organizations enjoyed repeat visits, including the Federalist Society and Catholic institutions, but he also commanded the attention of defense lawyers in Colorado, appellate judges in Alberta, Canada, and high school students in Fort Smith, Arkansas.

Scalia was happy to share the spotlight with his colleagues, co-headlining events with “best buddy” Justice Ruth Bader Ginsburg in Washington, D.C., and hunting partner Justice Elena Kagan in Mississippi. Scalia’s gift for comedic timing and the affection between the Justices was apparent in their on-stage banter: at a February 2015 Smithsonian Associates event with Ginsburg, Scalia referred to the two of them as an “odd couple” and responded to a Ginsburg story about wine-drinking prior to the State of the Union with a quick, “That’s the first intelligent thing you’ve done.” At his December 2014 Ole Miss appearance with Kagan, she noted that Scalia is “funny and charming and super-intelligent and witty, and I always learn stuff from him, and I always enjoy it.” “And back atcha,” Scalia replied.

Scalia also appeared on stage with his co-author and friend Bryan A. Garner at least six times in the last year and a half. His last events on our map were a January 28 appearance in Singapore and a pair of events in Hong Kong on February 1 and 2 – indefatigable to the end.

At the time of his death, Scalia was scheduled to appear in at least three more events: a Federalist Society symposium in Virginia, a lecture on the Constitution in South Dakota, and a summer teaching position in Nice, France.

We will sincerely miss following Justice Scalia’s speaking engagements. For a full list of his appearances that we’ve tracked (including media coverage where available), please visit www.scotusmap.com/scalia.

Reviewing the other Justices’ events from the second half of January:

On January 21, Justice Stephen Breyer promoted his book, The Court and The World: American Law and the New Global Realities, at the Brookings Institution; the full video is posted at C-SPAN’s website, while Justice Samuel Alito was part of a judging panel for the Van Vleck Constitutional Law Moot Court Competition final at the George Washington University Law School. According to GW Today’s summary, Alito told the attendees that the four finalists were “much better” than he was as a moot court participant in law school, and he joked that they should treat the panel’s decision as preparation for real life: “There’s a lot of injustice in the decision-making process, so get used to it.”

On January 25, Justice Sonia Sotomayor returned to the Bronx (her hometown borough), where she spoke at the Renaissance Youth Center, Saint Ignatius School, and The Bronx Defenders. She shared stories about her childhood at Saint Ignatius, telling students that “no matter how many other experiences that you have in life … you never forget where you grew up, because this is the foundation for the rest of your life.” Coverage of her speech at the Bronx Defenders, where Sotomayor was honored with the “Partner in Pursuit of Justice” award, comes from The New Yorker. The following day, Sotomayor traveled to Newark, New Jersey, where she addressed students at Saint Vincent Academy.

Also on January 25, Breyer visited his alma mater, Harvard Law School, where he talked about his book. Harvard Law has posted video of the event online.

That same week, Justice Clarence Thomas was at the University of Florida, speaking to students in property law and constitutional law classes. The Independent Florida Alligator reported on Justice Thomas’s visit.

Breyer traveled to France toward the end of the month, participating in the first-ever Nuit des Idées (Night of Ideas) in Paris on January 27. Video of his panel, “Quelle Justice Pour Quel Avenir?” (What Justice, and for What Future?), is available via the Librairie Mollat on YouTube.

On January 28, Ginsburg appeared at Brandeis University to give remarks on the legacy of Justice Louis D. Brandeis, as part of the university’s celebration of Brandeis’s nomination and confirmation to the Court one hundred years ago. The Boston Globe covered Ginsburg’s speech, and video is available on Brandeis University’s website.

On February 3, Chief Justice John G. Roberts gave the keynote speech at New England Law | Boston’s Annual Law Day Banquet. According to MassLive.com, the Chief Justice told audience members that “[c]riticism of the Court doesn’t bother me at all” and lamented the politicization of the Supreme Court confirmation process, stating that legislators today target nominees with questions that they already understand would be “inappropriate” for the nominees to answer. “I do think the process is not functioning very well,” he admitted.

On February 5, retired Justice John Paul Stevens opened the University of Miami Law Review’s 2016 Symposium with a keynote that focused on the First Amendment rights of students. “Most students… do not shed their brains at the schoolhouse gate, and most students know dumb advocacy when they see it,” Stevens said. The University of Miami has coverage of his keynote.

On February 8, Sotomayor visited the New York University School of Law, where she participated in a conversation on the Seventh Amendment and the importance of civil juries, hosted by NYU’s Civil Jury Project. NYU Law has shared video of the event online.

On the same day, Breyer was in Florida to speak at an event hosted by the Forum Club of the Palm Beaches and the Palm Beach County Bar Association, where he was serenaded with a surprise video made by his former Boy Scout Troop from San Francisco. The South Florida Sun Sentinel reported on the speech.

Looking to the rest of February: