On December 7, Justice Stephen Breyer was featured as part of the Aspen Institute’s Alma and Joseph Gildenhorn Book Series in Washington, D.C., where he discussed his latest book, The Court and the World. The Aspen Institute has posted video and a review of the event online.

Two days later, Justice Anthony Kennedy was honored with the Beacon Prize at Human Rights First’s 2015 Human Rights Summit Gala in Washington, D.C. According to Human Rights First, Kennedy received the prize for his leadership in “interpreting and applying the law to advance human dignity and freedom,” including his majority opinion in Obergefell v. Hodges that legalized same-sex marriage nationwide. “It is our duty as Americans, our duty as citizens of the world, our duty as persons, our duty as human beings, to ensure that light is always cast in the darkness and in the shadows where injustice persists,” Kennedy said in his acceptance speech. “We must always re-dedicate ourselves to the proposition that the work of freedom is never done.” Video of the award presentation and Kennedy’s speech is available online. 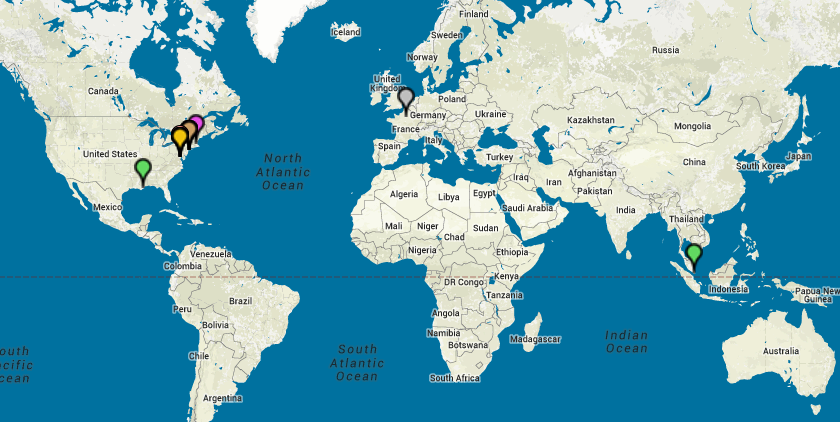 On December 10, Breyer spoke at a book launch co-hosted by the World Bank and the Washington Foreign Law Society. A summary and pictures from the night are available on the WFLS casite.

Once the Court’s December sitting ended, a third of the Justices traveled to New York. On December 15, Kennedy gave a speech at the Packer Collegiate Institute in Brooklyn, encouraging students to engage in civic affairs and not to take the Constitution for granted. “You have to remember: there’s no DNA test to see if you believe in freedom. It’s taught and learned and discussed.” Kennedy also referenced the hit musical Hamilton, saying: “Once of the things I really like” about it “is that it reminds us that the Constitution wasn’t made by a bunch of old guys. It was made by a bunch of young people with energy! That’s what it means to have freedom.” The Packer Collegiate Institute has posted a summary of the speech.

On December 16, Breyer delivered a lecture on the transnational role of the Supreme Court at the Foreign Policy Association in New York, speaking at length about both the effects of globalization on the cases that he hears and the worldwide implications that some Supreme Court rulings may have. The video is available on YouTube.

The next day, Breyer spoke at the CUNY School of Law’s Sorensen Center for International Peace and Justice, where he recalled meeting Fred Korematsu (a “feisty guy,” Breyer said), who challenged the internment of Japanese Americans during World War II in Korematsu v. United States. Video and an overview of the discussion are online.

On December 17, Justice Ruth Bader Ginsburg led a workshop on women and the Constitution as part of the New York Historical Society’s Teacher Workshops: The Constitution in the Classroom series.

Breyer wrapped up our list of December events with a December 18 appearance at the Cooper Union. Breyer, an architecture aficionado who has sat on the jury of the Pritzker Architecture Prize since 2012, discussed the civic importance of courthouse design with Henry N. Cobb. Pictures and a review are available via the website talkcontract.contractdesign.com.

For the month of January:

Justice Antonin Scalia made headlines for his January 2 speech at the Archbishop Rummel High School in Metairie, Louisiana, when he attributed the successes of the United States in part to Americans giving “honor” to God. “God has been very good to us. That we won the revolution was extraordinary. The Battle of Midway was extraordinary. I think one of the reasons God has been good to us is that we have done him honor. Unlike other countries of the world that do not even invoke his name we do him honor,” Scalia said. “There is nothing wrong with that and do not let anybody tell you that there is anything wrong with that.” The Associated Press covered the event, and audio of Scalia’s speech is available via Nola.com.

On January 7, Scalia and Justice Samuel Alito attended the 800th Jubilee of the Order of Preachers at the Dominican House of Studies in Washington, D.C. Alito gave remarks and Scalia delivered a lecture on St. Thomas Aquinas and the law. The Daily Signal summarized Scalia’s speech.

Also on January 7, Breyer spoke at the Association of American Law Schools Annual Conference in New York, where he promoted his book and encouraged attendees to travel abroad and meet with their international counterparts to help strengthen the rule of law around the world. The National Law Journal reviewed Breyer’s speech.

Alito will judge the final round of the Van Vleck Constitutional Law Moot Court Competition at the George Washington University Law School on January 21.

Justice Ruth Bader Ginsburg is set to speak at Brandeis University on January 28 to commemorate the one-hundredth anniversary of Justice Louis D. Brandeis’s nomination to the Supreme Court.

Scalia, meanwhile, will head to Asia after the Court’s January session. On January 28, he will give a lecture on the judicial interpretation of legal texts in Singapore as part of the Lee Kuan Yew Distinguished Visitors Programme.