Argument analysis: The question not asked

If it is true, as history seems to suggest, that labor unions almost always throw their support to liberal politicians and liberal public policies, that understanding would make more sense of Monday’s Supreme Court argument in a fundamentally important union case.  That is really the only way to accept an underlying premise of the entire argument — one that simply was not put to the test by any questions.

The premise has two parts: first, everything a union representing government workers does in bargaining over workers’ benefits is, solely because it is a union making the demands, an action driven by ideology and politics; and, second, because of the political nature of the union, every non-union worker represented by that union objects to subsidizing anything it demands.  Would there have been no value in questioning the breadth of either premise? Both went unexamined. 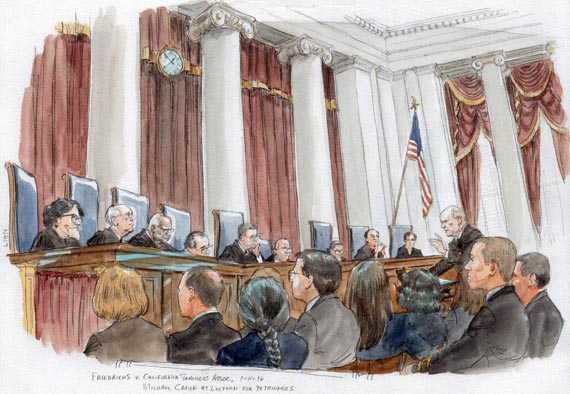 Early in the argument, a Washington, D.C., lawyer, Michael A. Carvin, made clear the basic complaint of the non-union California teachers he represents when he told the Court that the teachers don’t want to be forced to pay any support to “an outside advocacy group like a political party or like a union.”  It was not a slip of the tongue, yet no one challenged whether the two actually were equivalent political entities.

What may have been most revealing is that the five Justices whose votes are likely to control the outcome showed no sign of doubting the non-union members’ premises, so most or all of those five would appear to be inclined to conclude that any charge of an “agency fee” to a non-member would be a compelled endorsement, with their money, of “a group that advocates an ideological viewpoint” (as Carvin also described the teachers’ union). 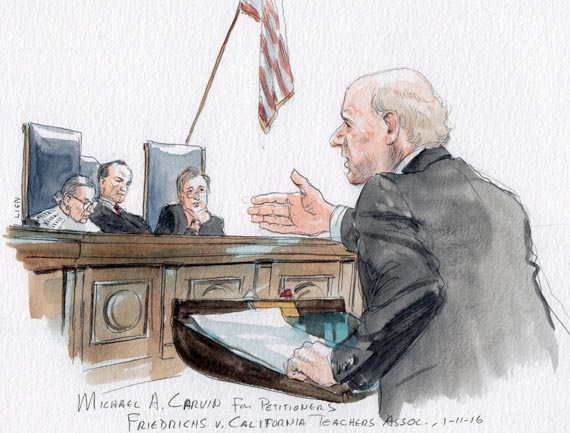 Those are the Justices who made up the majority in a five-to-four ruling in 2014, Harris v. Quinn, that stopped just short of inviting the kind of First Amendment challenge that Carvin brought to the Court Wednesday, after rushing it through lower courts as a test case on whether the Court was ready to overrule its 1977 decision in Abood v. Detroit Board of Education.  That is the precedent which established the legality of an “agency fee” to be levied by public-sector unions on non-union members to support collective bargaining.

The four Justices who were in dissent in the Harris case appeared to be headed toward dissent again, even as they made no headway in shaking Carvin’s assault on the teachers’ union as a state-compelled advocate for workplace policies that the non-union members appear to find objectionable.  Those four appeared to be clinging to the Court’s usual reluctance to overturn a constitutional precedent that had been followed for nearly four decades.

The more liberal Justices gained a measure of support from Justice Anthony M. Kennedy as they wondered what would be the fate of “agency fees” that now exist in thousands of union contracts affecting millions of workers, if the Court were to overrule the Abood decision.  The liberals seemed unpersuaded by Carvin’s suggestion that such fees outside the public sector were not in jeopardy. 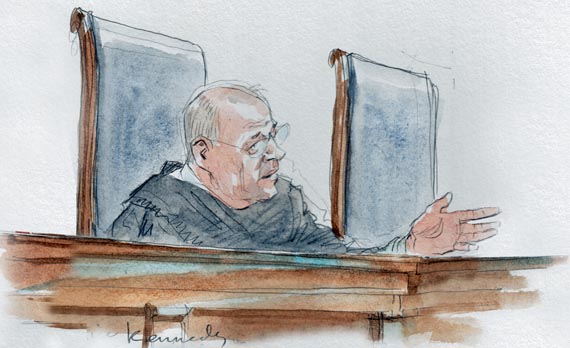 Kennedy otherwise appeared to be lining up with the developing consensus against the Abood precedent.  He emphasized his worry about suppressing the views of individual workers who had opted not to join unions or to support union causes.  At one point, in fact, Kennedy interpreted the operation of the “agency fee” as a mechanism to “silence” the non-union members as a group. 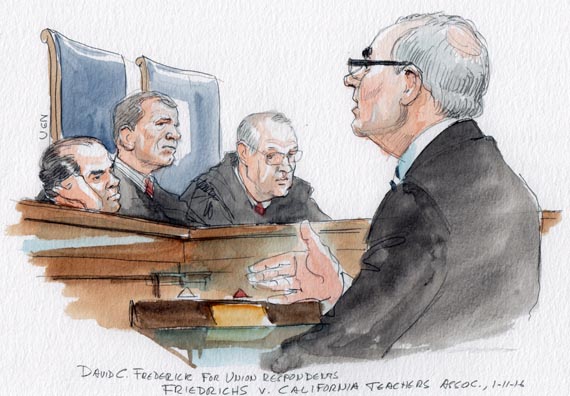 When reminded by the union’s lawyer, David C. Frederick of Washington, D.C., that Kennedy had written a ruling allowing the discipline of a prosecuting attorney for speaking out on an issue of legal strategy in the office, the Justice retorted that that case involved the “silencing” of only a single worker, not “a whole class of persons.” 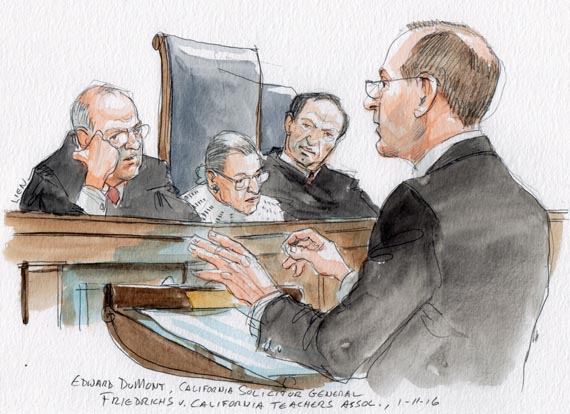 Frederick was joined in defending the Abood precedent by Edward DuMont, the solicitor general of California, and U.S. Solicitor General Donald B. Verrilli, Jr., with the federal government on the union’s side.   All three of those lawyers emphasized the importance to government to have only a single union to deal with collective-bargaining issues for a group of public employees like teachers, with the understanding that that single union would represent in contract negotiations the interests of all the workers, not just the union members. 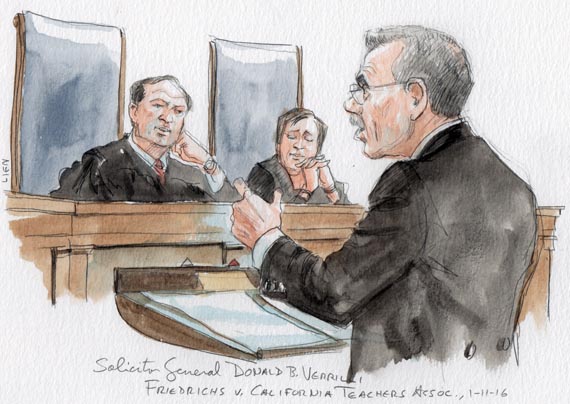 But even on the point of single-union representation, Carvin talked of the non-union members’ hostility to that arrangement.  They did not want the teachers’ union negotiating on their behalf, he said; they wanted to do that themselves, but California prevented them from doing so.  It was another way that he chose to emphasize the recurring theme of the non-union teachers as an oppressed group.

[Disclosure: Goldstein & Russell, P.C., whose attorneys contribute to this blog in various capacities, is among the counsel on an amicus brief by the American Federation of Teachers and American Association of University Professors in support of the respondents in this case. The author of this post, however, is not affiliated with the law firm.]