With so much attention on pointed and inhospitable comments in last Term’s opinions, the argument in Americold Realty Trust v. ConAgra Foods was a welcome interlude, with the Justices about as close to consensus as possible. The case involves diversity jurisdiction, specifically how to determine the state (or states) in which a real estate investment trust (commonly called a REIT) is a citizen. The doctrinal terrain is simple, with the parties pointing to two distinct rules.

The trust (petitioner Americold) is trying to stay in federal court, so it argues that the trust is a citizen only in the (relatively few) states in which its trust managers are located. Americold points to centuries (yes, centuries) of cases in which the Court has recognized trustees rather than beneficiaries as citizens for purposes of diversity jurisdiction.

Respondent ConAgra Foods is trying to get out of federal court, so it argues that the trust is a citizen in each state in which one of its beneficiaries is a citizen. Because Americold (like all real estate investment trusts) has hundreds of shareholders, that would mean that it is a citizen in almost every state, and thus rarely if ever eligible for diversity jurisdiction. ConAgra Foods points to the Court’s 1990 decision in Carden v. Arkoma Associates, in which the Court drew a line between corporations and all other artificial entities: corporations are citizens where they are incorporated; all other artificial entities are citizens in the states in which their beneficial owners are located.

From his opening remarks, Michael Pospisil’s presentation for Americold faced a major hurdle: the Justices plainly found the cases involving trustees largely irrelevant. The Justices that addressed Americold’s position didn’t view those cases as involving artificial entities at all. Rather, those cases could be dismissed as disputes in which the trustees held title to the relevant property and sued in their own name. In the case of the modern REIT, by contrast, the trust itself owns the property and is the entity that sues and is sued. So, for example, Justice Antonin Scalia early on asked, “[w]ho owns these assets under Maryland law? Is it . . . this new corporation-type entity? That’s the entity that can sue.” That conclusion led him to dismiss out of hand Americold’s contention that the citizenship of the trust managers should be decisive: “[T]he trustees are sort of in the position of managers, just as though you hired a CEO.” 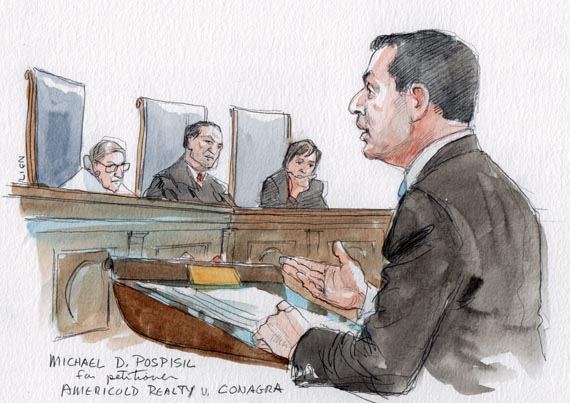 Indeed, much of the argument ignored Americold’s contention that the citizenship of the trust managers should be dispositive. Rather, the Justices viewed the case through the lens of Carden’s bright-line rule, a perspective that left the Court considering whether REITS are so much like corporations that they should get the same treatment for diversity purposes as corporations. On that point, amicus National Association of Real Estate Investment Trusts (NAREIT) had filed a first-rate amicus brief in support of Americold. NAREIT argued that the modern reality of REITs with tens of thousands of shareholders, trading shares on major stock exchanges, justifies giving REITs the same treatment as corporations, with citizenship depending on the state under which the trust is organized (in this case, Maryland).

Unfortunately for Americold, it was clear that the Justices did not fully understand that point: Scalia, for example, seemed astonished by the suggestion that REITs commonly have more than a thousand shareholders. In any event, NAREIT’s position had little chance of gaining support during the argument because Pospisil, despite the Justices’ open skepticism of Americold’s position, resisted any suggestion that the Court should adopt NAREIT’s position.

A question from Justice Samuel Alito early in the argument gives a good sense of the tone. He asked why the REIT “is more like a traditional trust than it is another unincorporated, artificial entity, like an LLC,” another type of unincorporated entity that often has large numbers of public shareholders. Justice Elena Kagan pushed the same idea most explicitly:

I thought that one of the virtues of Carden was that it just set up a very categorical, bright-line rule. Everything that’s an artificial legal entity that’s not a corporation ought to be treated in the same way. Doesn’t matter what you call yourself. You can put trust in the title, or not put trust in the title. If you’re an artificial legal entity that is not a corporation, [you’re] subject to the rule of Carden.

Justices Ruth Bader Ginsburg and Sonia Sotomayor saw the case in much the same way, with Sotomayor characterizing Americold as “asking us to come and place trustee law above our general rule, that you’re either a corporation or you’re not.” 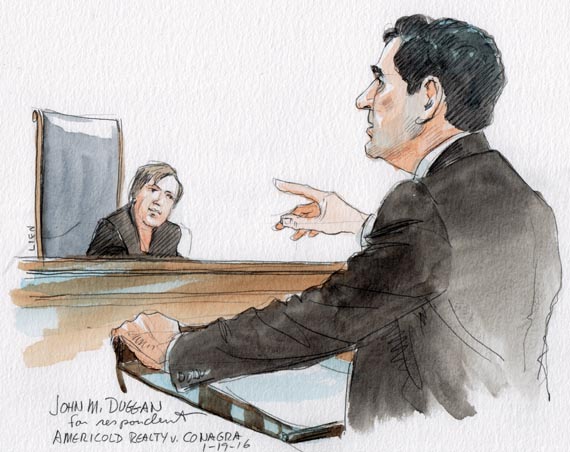 The only notable comment suggesting a different take on the case came from Chief Justice John Roberts, and it was just as unhelpful to Americold. Implicitly donning his hat as presiding officer of the Judicial Conference, he asked whether “the impact on federal jurisdiction” should be “a pertinent consideration.” As he put it, “this is a standard run-of-the-mill commercial dispute about a commercial accident. And adopting one position would limit the number of times that such disputes would be brought in federal court. The other one will expand it.” Clearly dubious that Americold had any real basis for a concern “that it’s not going to get a fair shake in the Kansas courts,” the Chief Justice apparently viewed the policy concerns as weighing heavily in favor of Carden’s “state of the beneficiaries” rule.

By the standards of recent years, questioning was remarkably sparse. The Justices allowed both advocates to speak without interruption for minutes at a time. Indeed, the Justices’ questions were so quickly exhausted that they left for an early lunch, rising after an argument that used only forty-three of the allotted sixty minutes. The Justices well may find the case more difficult when they come to drafting the opinion, but if the argument is any indication, this case looks like a strong candidate for a unanimous opinion, handed down in short order.