Argument analysis: “Wow . . . That’s my comment” – a passive Court and a predictable outcome on three-judge courts

Lawyers for both sides in yesterday’s argument in Shapiro v. McManus encountered an unusually subdued Court. In a case considering whether a single district judge can dismiss, for failure to state a claim, an action that otherwise must be decided by a three-judge district court, the Justices asked fewer questions than in many arguments and allowed both attorneys to speak for long stretches without interruption. Many of the questions were less about challenging the attorney than about understanding the three-judge district court process generally and as it applies in reapportionment cases. But many questions, particularly from Justices Antonin Scalia and Elena Kagan, indicated a likely victory for the voters challenging Maryland’s legislative redistricting, allowing them to have their claims heard by a three-judge court.

Arguing for the voters, Michael B. Kimberly encountered several Justices seemingly interested in narrowing the power of the single judge even more sharply than Kimberly was urging. Justice Scalia questioned the correctness of the Court’s precedent allowing a single judge to dismiss “insubstantial” claims or to determine whether there was subject-matter jurisdiction in the case, seeming to suggest that all such decisions must be made by three judges. Justice Anthony Kennedy was troubled by the prospect that a single judge could dismiss a case that was barred by the Court’s precedent, even when that precedent has been questioned, may no longer be valid, and may be ripe for reconsideration. Kimberly indicated he would welcome the Court narrowing the single judge’s power, but that it was not necessary for the voters to prevail in the case. 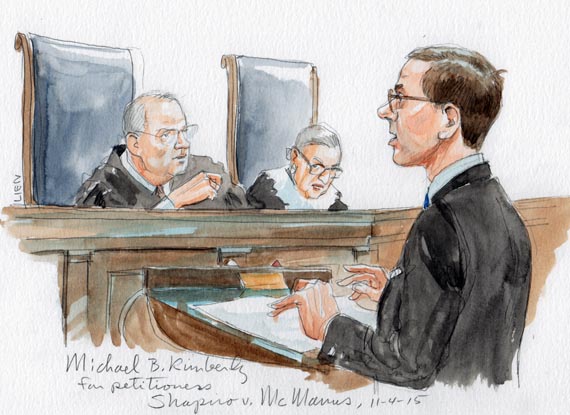 Other questions explored the basic logic and operation of the three-judge process. Justices Elena Kagan and Ruth Bader Ginsburg asked whether the statute is a jurisdictional limit on the power of a single district judge or a procedural claim-processing rule, a key jurisprudential point for this Court. Kimberly pushed the jurisdictional view, while allowing that, even if merely procedural, the requirement of three judges to rule on the merits was nevertheless mandatory. When Ginsburg questioned the jurisdictional characterization by pointing out that the statute required appointment of three judges only if a party requests it, Scalia asked whether the need for a request precluded the statute being jurisdictional, because “a request can be one of the conditions to confer jurisdiction.” Several Justices asked about the statute’s purpose and whether sending certain cases to three-judge courts was an anti-plaintiff move, designed to make it harder to obtain injunctions halting enforcement of unconstitutional state laws. But Kimberly responded that, while that may have been true when Congress invented the three-judge district court in 1910, the process has evolved; he agreed with Chief Justice John Roberts and Ginsburg and Kagan that plaintiffs rarely fail to request the court and generally like the immediate, mandatory review by the Supreme Court. In fact, Congress required three-judge courts for cases under the Voting Rights Act precisely because three judges were more likely to grant relief to plaintiffs.

Roberts offered the sharpest questioning of Kimberly and the argument that the single judge could dismiss an “insubstantial” claim but not one that fails to state a claim. Roberts called this a “fuzzy line” and a “collection of adjectives” that is not really much of a rule and does not offer lower courts much guidance. And, Roberts insisted, this was especially problematic if the statute is jurisdictional, as the Court favors clear jurisdictional lines. Kimberly insisted that the collection of adjectives comes from the Court’s own precedent – although, again, he would not fight the Court’s decision to reject those precedents and narrow the single judge’s power. During Kimberly’s rebuttal, Roberts joined with Justices Stephen Breyer and Samuel Alito to suggest that having the three-judge court decide politically charged and sensitive redistricting cases, with mandatory Supreme Court review, creates unique concerns about the appearance of political favoritism among federal courts.

Arguing for Maryland, Steven M. Sullivan faced fewer questions, but greater incredulity. Kagan asked whether the state had changed its argument from its brief: although the brief had argued that the 1976 amendments to the three-judge process (creating the current 28 U.S.C. § 2284) changed the law from the Court’s prior cases, Sullivan now was arguing that the historic practice of allowing single-judge dismissals justified the dismissal in this case. Sullivan insisted that he was merely responding to the opposing argument, but Scalia responded that the point should have been in the brief. Kagan also challenged Sullivan’s position that there was no difference between an insubstantial claim and one that fails to state a claim for relief, because the insubstantiality of the claim, tied as it is to the merits, cannot be form the basis for a jurisdictional dismissal. Kagan insisted that the Court has always recognized a narrow category of “completely ridiculous” cases that are dismissed on jurisdictional grounds despite being “kind of merits-y.” But it remains a different inquiry than for the typical dismissal for failing to state a claim. 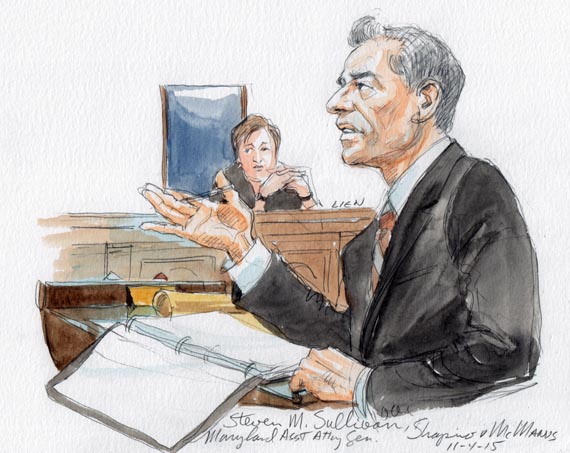 Scalia challenged Sullivan on the idea that the statute’s reference to three judges being “required” meant that the complaint states a claim; Sullivan responded that incorporating that concept into the statutory text is as reasonable as incorporating insubstantiality into the text. But Scalia then asked about the procedural implications of this argument – the single-judge dismissal would be appealed to the court of appeals and then to the Supreme Court, but if the Court rules that the plaintiff did state a claim, the case would go back to begin all over again, this time before a three-judge district court. When Sullivan acknowledged that lengthy process, Scalia responded, to laughter, “Wow. Wow, . . . that’s my comment.”

Sullivan managed to end the argument on his strongest point, in an exchange with Roberts about mandatory Supreme Court review of three-judge court judgments and the effect on the Court’s docket. Sullivan argued that the Court has heard seven mandatory appeals from three-judge panels in redistricting cases involving Maryland alone, meaning as many as 400 appeals from the nation as a whole. This, he argued, is why the Fourth Circuit’s “reasonable interpretation” that a single judge can dismiss a case for failure to state a claim, even if the case is not frivolous, serves the interests of the Court and litigants.

One observer of yesterday’s argument predicted a unanimous victory for the voters. While not as aggressive or frequent, the tenor of the Justices’ questions yesterday suggests that is a good bet.