Argument analysis: To decide, or not — that is the question

The Supreme Court seems to be eager to add new clarity to its bar to racial profiling in selecting criminal trial juries, but it spent much of its time in hearing a new case on Monday trying to sort out two procedural obstacles that apparently arose at the last minute.  The Court has a new system in place to avoid just that kind of glitch, but it keeps discovering that there may still be some kinks in the process.

The Court had granted review of Foster v. Chatman with the aim of giving some further guidance to trial judges as they analyze whether potential jurors were kept off of a case because of their race.  If the Justices can get to that task, it could result in a significant ruling on what to read into prosecutors’ attempts to explain away their actions in keeping all or most blacks from being seated on a jury to judge a black defendant for killing a white person.  For about half of Monday’s hearing, however, that task looked out of reach.

In its last Term or so, the Court has regularly been delaying its decisions to take on new cases, until it can run them through a more thorough screening process.  The aim is to avoid spending the Court’s time on cases that might wash out, after being granted, because of some impediment that had been overlooked on initial consideration.

There was no sign of a complication like that as the hearing approached in Monday’s case, a death-penalty case involving an eighteen-year-old black youth, Timothy Tyrone Foster, convicted of murdering a seventy-nine-year-old white woman in Rome, Ga.

However, on Friday, with the argument only a weekend away, the Court in a truly rare move wrote to lawyers on both sides of the case, warning that questions would come up about the procedural route this case took to reach the Justices from lower courts in Georgia, and about the significance, if any, of that route.  Given the short notice, the letter said, the Court might call for further written briefs on that issue after they had heard the case.

As the hearing unfolded, here are the potential obstacles looming: first, which state court’s decision should be up for review — one by the Georgia Supreme Court, or one by a trial court — and, second, no matter which decision is at stake, did either of them actually decide the racial profiling claim?  Each court had rejected the claim, but what did their rulings actually mean?

Justices Anthony M. Kennedy and Antonin Scalia suggested that the Court might want to return the case to one or the other of the state courts, to answer what state law might have to say about the power of each to rule as they did.   Depending upon what answer came back, there might then be a question about whether the Supreme Court had authority to decide the jury-selection issue, thus potentially leaving that for another day.   If the lower court rulings had been focused on state law issues, rather than federal constitutional questions, the Court might not be able to review them.

As some members of the Court recognized, there may not be another race-based jury selection case with evidence seemingly as clear-cut as it appeared to some of them to be when an all-white jury was chosen to Foster.

The defense lawyers had managed the rare feat of getting their hands on the prosecution team’s privately prepared notes about potential jurors, with all of the blacks in the pool listed on one sheet that was headlined “Definite NO.”  There was one white juror on that list, but she was at the bottom.  Other papers among those retrieved by the defense were comparisons of black jurors against each other, in case they were forced to accept even one black juror for the trial.

One of the black women on the list was considered acceptable by prosecutors for a time, but then she, too, was struck, for reasons that several Justices reacted to skeptically.

This was the kind of thing, the Supreme Court was told on Monday, that could illustrate what was then — some quarter-century ago — a common practice in that community of keeping blacks from serving on juries in criminal cases.  Justice Elena Kagan at one point told the state’s lawyer: “You have to deal with all this information that, what it really was, was they wanted to get the black people off the jury.”  The Justice clearly regarded what was in the prosecutors’ notes as telling, indeed.

As Foster’s lawyer, Stephen B. Bright of Atlanta, opened the argument Monday, he bluntly criticized the prosecutors, saying that they “came to court on the morning of jury selection determined to strike all the black prospective jurors.”  As he prepared to go on, Chief Justice John G. Roberts, Jr., interrupted, suggesting that Bright start with the procedural issue the Court had raised in the letter to counsel. 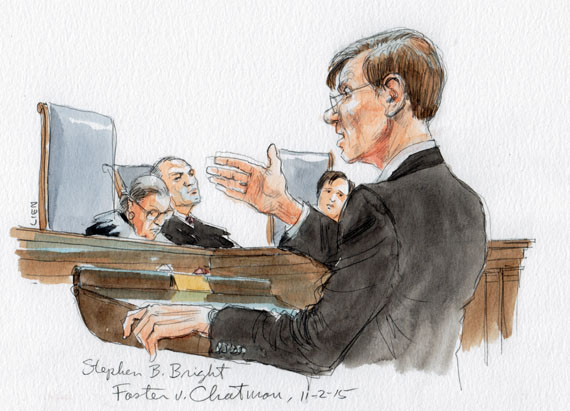 The exchange on that point continued for the next twelve minutes, or almost half of Bright’s allotted time at the lectern.  The Court was trying to figure out the quite technical question of how to treat two state court rulings that were made after the guilty verdict in the case had become final, and Foster was trying in post-trial challenges to contest the verdict.

In Foster’s case, the state trial court handling the post-conviction challenge ruled that many of the issues raised about racial bias in jury selection were foreclosed by an earlier Georgia Supreme Court ruling when it first examined Foster’s case and upheld his conviction and sentence.  But, as Justice Stephen Breyer pointed out, that court had also indicated that it was, in fact, rejecting those claims on the merit.  Which was it? Breyer wanted to know.

When Foster went from that court up to the Georgia Supreme Court, it summarily found there was no reason to take on the case.  Justice Sonia Sotomayor, however, showed that the state supreme court could have ruled against Foster’s appeal only it if had first weighed whether it raised a valid legal issue.  Wasn’t that a ruling on the merits, she asked.

All of this flowed out of the Court’s Friday letter, wondering which state court decision Foster’s lawyer should have appealed, and what the difference between the two, if there were any, meant to the Court’s review.

Georgia’s lawyer, Beth A. Burton, a deputy attorney general from Atlanta, struggled to try to help the Court sort out what Georgia law might say about the procedural quirks of this case, but she ultimately was led to concede that she wasn’t sure what the basis of the two state rulings had been.  She said the role of the state supreme court in reviewing cases like Foster’s was now a “hot-button issue” among lawyers in the state, and those lawyers and the lower courts would appreciate hearing from the Supreme Court on the issue — although she said it ultimately was a state law question. 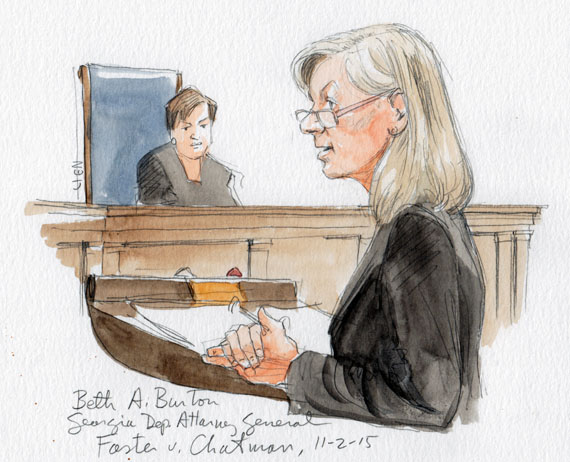 It was not much of a surprise when, about halfway through the argument, Justice Sotomayor commented: “I’m sorry.  I’m so confused I can’t even — .”  Laughter in the courtroom drowned out the rest of what she had said.

If there was an ideological division among the Justices suggested by their questions and comments, the more liberal Justices were working to try to salvage the case for a ruling on the merits, and the more conservative Justices were more inclined to let the lower courts have at least the first chance to resolve the procedural glitches — if they were willing to do so upon request.

Recommended Citation: Lyle Denniston, Argument analysis: To decide, or not — that is the question, SCOTUSblog (Nov. 2, 2015, 4:16 PM), https://www.scotusblog.com/2015/11/argument-analysis-to-decide-or-not-that-is-the-question/