A high-stakes case on what pay workers in an Iowa slaughterhouse have earned reached the Supreme Court as the latest major test of class-action claims by groups of individuals, but the controlling legal rule for such cases all but vanished from the scene.  Instead, the Justices appeared determined on Tuesday to revive — and maybe extend — a 1946 precedent, and that could spell legal woe for the packing company, Tyson Foods, Inc.

With Justices Anthony Kennedy and Elena Kagan leading the way, the Court appeared to be turning away from any ruling on how courts should try class claims under Federal Rule of Civil Procedure 23.  Instead, the case of Tyson Foods v. Bouaphakeo seemed likely to be resolved on a question of the kind of proof that can support a routine claim for overtime pay. 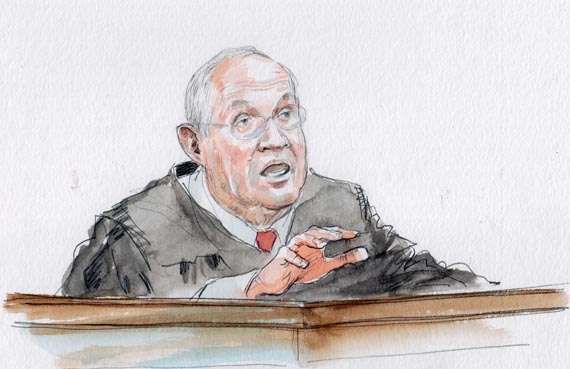 Instead of trying to decide if a Rule 23 class can be approved based upon statistical modeling, which the Court has previously condemned as “trial by formula,” the Court evidently was leaning toward deciding whether “representative proof” is sufficient to show that a group of assembly-line workers did not get enough overtime wages when a company has not kept complete records on who earned what.

The Justices’ criticism of “trial by formula” came four years ago in Wal-Mart Stores v. Dukes, a precedent-setting case against Rule 23 class actions.  The Court said that such an approach deprives a company of a chance to defend itself against a class claim for damages.  Its approval of “representative proof” in wage-and-hour cases came sixty-nine years ago in Anderson v. Mount Clements Pottery Co.  The Wal-Mart ruling did not come up at all on Tuesday; the Mount Clements decision got a great deal of attention throughout the argument.  That imbalance was telling.

Carter Phillips, the Washington, D.C., attorney representing Tysons in its bid for a broad new ruling against certifying Rule 23 classes, drew aggressive questioning from the Justices, even getting challenges on the trial strategy the company’s lawyers had employed.  He had barely started his argument when several Justices wondered exactly what he was asking the Court to do.  “I’m completely at a loss,” Justice Sonia Sotomayor confessed. 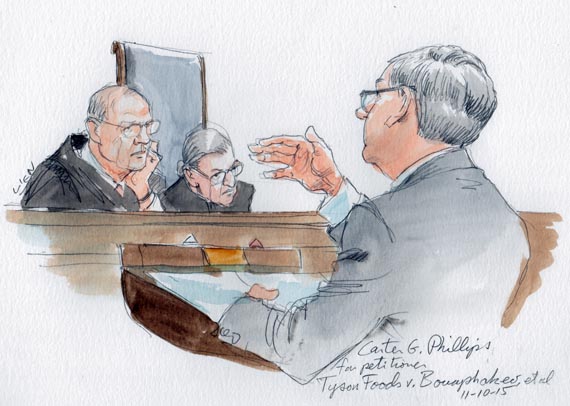 But the difficulty for his Rule 23 challenge really began with Kagan bluntly asserting that the case was not about Rule 23 at all.  Bringing up the Mount Clemens decision, she noted that it had found courts’ use of “certain kinds of statistics are perfectly OK.  The question before us is not a Rule 23 question, but whether this sort of evidence [in this case] complies with Mount Clemens.”  She did not say it, but everyone taking part in the argument well knew that the 1946 decision was only about an overtime pay law, rather than a class claim. 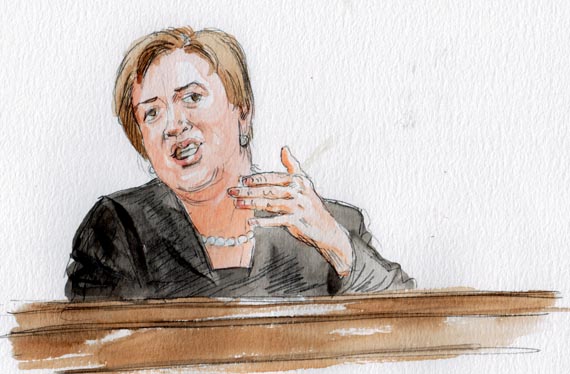 Phillips tried to counter that the prior ruling was only about proof on the scope of damages in a wage-and-hour case, and thus did not apply to the kind of proof needed to support approval of a Rule 23 class.  That comment did not deter the Justices’ focus on Mount Clemens, and Kennedy was soon raising questions about its application to the Tyson workers’ claim.  Justice Stephen Breyer recited from the 1946 opinion and then asked, rhetorically, “What’s wrong with that?”

The Court then turned to the question of sending the case back to lower courts, to determine who would share in the damages verdict that the jury had approved against Tyson — some $5.8 million.  Some members of the Court — most conspicuously, Chief Justice John Roberts, Jr. — were somewhat troubled that the jury had awarded the workers only about half of the damages they sought, but others thought that the trial judge could work out the apportioning of the award.

When Washington, D.C., lawyer David Frederick took the lectern to speak for the workers, he immediately tried to assure the Court that the trial judge would have no difficulty, when the case returned, in figuring out who was entitled to share in the money.  He said every worker who was entitled was known, and noted that the jury had been instructed by the judge to make awards only to those who had some eligibility for overtime pay, especially for the time they spent putting on and taking off special protective and sanitary clothing and gear. 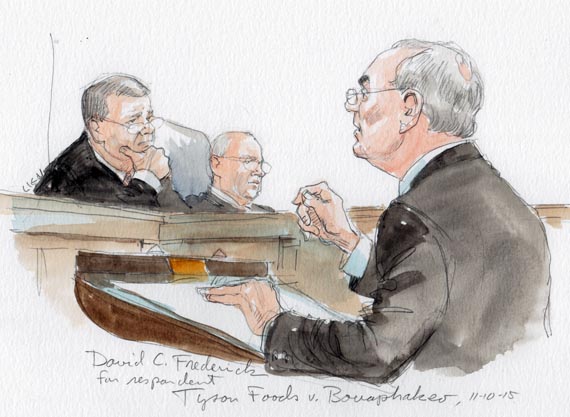 Justice Samuel Alito, Jr.,was not convinced.  He speculated that the money would be passed out “in a slapdash fashion” because it was not clear from the lump-sum verdict which workers were actually denied overtime pay to which they were entitled.  It appeared to be a comment that came out of a lingering suspicion of Rule 23 class actions in general.

Roberts and Alito both suggested that there may have been significant differences among the Tyson assembly-line workers’ assignments and gear, but Frederick insisted that the differences were “minimal.”  (Phillips, in rebuttal, would contest that point, citing a quotation from the trial judge that “there were some very big factual differences between these employees.”)

Kennedy tried but failed to get Frederick to concede that this case would be closer if Rule 23 remained an issue in the case than if it turned on the Mount Clemens precedent, because of some doubt about whether the class was properly certified.  Frederick simply repeated, several times, that the averaging done by the workers’ expert at the trial found evidence that “was clustered around the averages” the expert had calculated, so the proof was “reasonable.”

Elizabeth Prelogar, an Assistant to the U.S. Solicitor General, appearing for the government as amicus supporting the workers, made two notable comments during her brief time at the lectern.  First, she offered Kennedy, on request, a legal standard for how a court should handle statistical evidence under the Mount Clemens precedent: she said a court should rely on it “when all employees performed substantially similar activities” in a factory or plant.

Second, she made the concession that Frederick would not, in answer to a question from Kennedy: the case, she said, would indeed be a closer one if Rule 23 remained part of the decision-making.  The case, she argued, “turns on the Mount Clemens standard.”

Roberts, noting that that precedent did apply only at the damages-calculation stage in a wage-and-hour case, wondered if it should also be extended to the liability phase of such a case.  Prelogar said that would be “perfectly logical” to do.  If the Court were to do that, this case — though confined to wage-and-hour law and saying nothing about Rule 23 — would become a significant precedent in its own right.