If the Supreme Court agrees twice to rule on an issue, the fair assumption is that it actually intends to decide it.  But it has once been frustrated in an attempt to clarify the sentencing of juveniles who commit murder, and it may well have set the stage itself for missing a new chance.  The reality is that, by the time that does get decided, it may have less real-world impact.

On Tuesday, the Court set aside seventy-five minutes to explore Montgomery v. Louisiana, testing who can benefit from a 2012 ruling sharply curbing judges’ power to sentence youths convicted of murder to life without parole.  But the Justices were far more fascinated with whether they even have the authority to decide that issue in Henry Montgomery’s case.  Indeed, the sentencing issue did not get serious attention until the lengthened argument was about half over, and frequently got put aside even after that.

What resulted, though, was a serious (and at times fascinating) seminar on how to sort out the roles of federal and state courts as they work in tandem, or in conflict, to sort out key questions of criminal law, and when can the Supreme Court step in to have the last word. 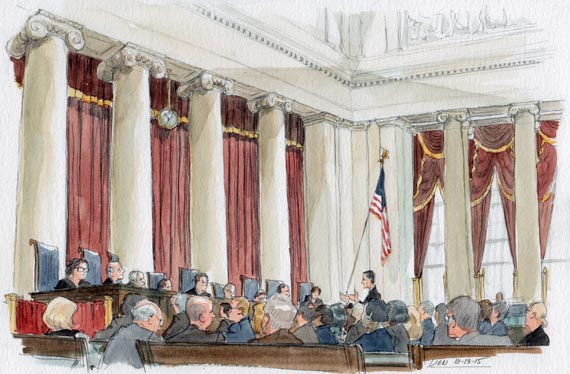 At the heart of the Montgomery case is the issue little explored Tuesday:  may several hundred — perhaps a thousand — inmates who received sentences of life without parole after they were convicted of murders they committed when under the age of eighteen get out of prison while still alive, or at least get their sentences reduced?

That number has been dwindling in recent years, and is perhaps half of what it was three years ago when the Supreme Court, in its decision in Miller v. Alabama, cast serious doubt on the constitutionality of putting minors into prison to remain until, decades later, they die.  Such sentences have been growing rare since then, as an increasing number of states have abandoned it as an option.

So far, though, that ruling has applied only to new cases, leaving unanswered whether it might be applied retroactively to nullify such sentences in cases where the youths’ convictions had become final before Miller was decided.  Late last year, after previously passing up several appeals raising the issue, the Justices agreed to review it in another Louisiana case.  At that time, though, they also raised the issue of whether they could decide it in that case.

No answers came because the inmate in that case got out of prison after making a new plea bargain with prosecutors, so the case was dismissed.  Soon after that, the Court agreed to try again — in the Montgomery case.  Louisiana has refused to apply the Miller precedent to pre-2012 cases, although it uses the retroactivity analysis that the Supreme Court has provided for federal court cases.

Once again, the Court set up the question of its jurisdiction as a separate inquiry, and soon named a Washington, D.C., lawyer, Richard D. Bernstein, to enter the case to argue that the Court had no power to review the case since it came up from a state, not a federal, court.  Because he was making an argument about jurisdiction, and no federal court can proceed if it lacks jurisdiction, Bernstein was first to take the lectern Tuesday. 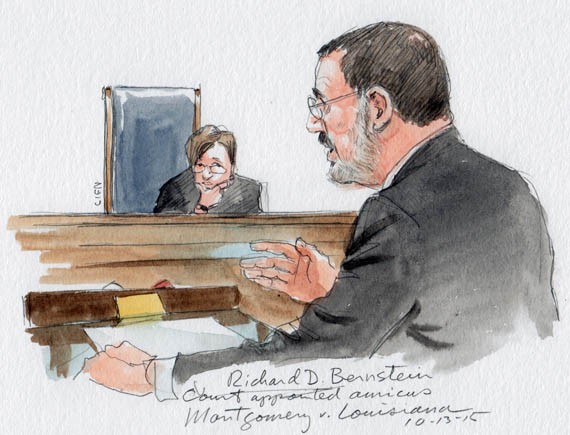 He quickly assured the Justices that, if they really want to rule on the retroactivity question, they could do so in an appeal from a lower federal court, and noted that, in fact, one such appeal is already pending, in another Louisiana case.  He then moved on to make a fervent argument that, if a state simply chooses to use the same retroactivity analysis that the Supreme Court has laid out for federal courts, there is no review role for the Justices to play.

The choice of whether or not to make a Supreme Court decision on criminal law retroactive, Bernstein said, is not a constitutional issue at all, so a state is free to follow it if it wishes, but is not required to do so, and where it comes out on the point cannot be challenged before the Justices.

That prompted several Justices to begin probing the limits of that argument.  For example, Justice Stephen G. Breyer wondered if prison inmates who were still serving sentences for crimes that the Supreme Court had since declared no longer punishable should be freed.  For example, Breyer said, suppose some women in Salem, Mass., had been sent to prison as witches, but witchcraft later was decriminalized by the Court; what then? 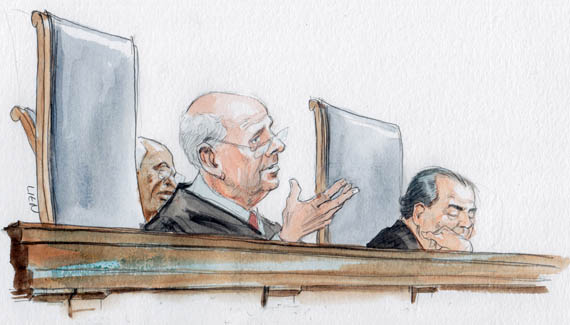 Bernstein replied by drawing a distinction between a constitutional rule that the Court laid down, which a state court would have to follow, and a non-binding formula for deciding whether to extend that rule backward to closed cases, which a state court would not have to follow.  Again, he said, an inmate trying to take advantage of a decision like Miller v. Alabama should go on to federal court to set up a test case on retroactivity, which could then go to the Supreme Court.

Henry Montgomery’s lawyer, Mark D. Plaisance of Thibodaux, La., tried valiantly to get the Court to focus on his plea to make the Miller decision retroactive so that his client could have a remedy, but he kept running into Justices’ questions about the Court’s power to decide that question in this case. 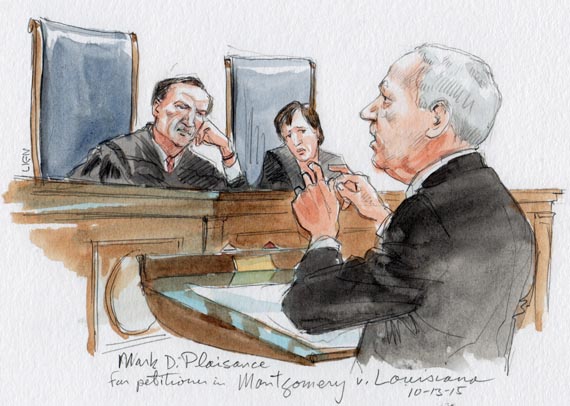 Plaisance’s main argument in favor of Supreme Court authority to decide this case was that the Louisiana Supreme Court had focused solely on federal law, not state law, so its ruling against retroactivity clearly should be open to review by the Justices.

The Justice Department sent Deputy Solicitor General Michael R. Dreeben, its most experienced criminal-law expert, to argue that the Court should rule on the retroactivity issue, and decide it in favor of inmates like Montgomery.  His strongest point on the division of labor between state and federal courts, it appeared, was that the Court should be encouraging states to “synchronize” the substance of criminal law with what they know will be applied as federal law when a state prisoner does pursue a federal habeas challenge to his conviction and sentence. 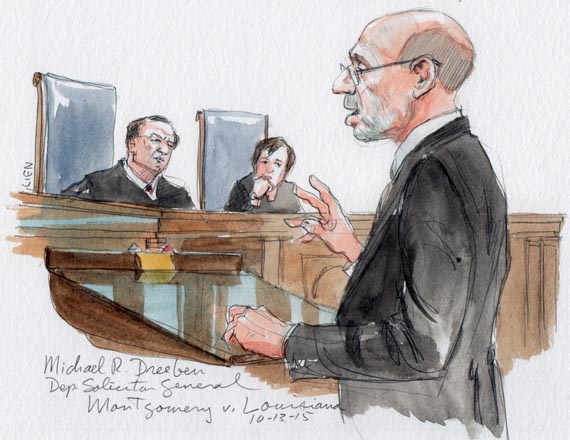 That will give state courts, Dreeben said, “the first crack” at defining legal principles ahead of what a federal court may do later.  “This actually services a very important federalism purpose,” he added.

The Miller decision should apply to earlier cases, Dreeben argued, because it was a significant change in the law, expanding the range of sentencing outcomes for juveniles, by easing the harshness of a life-without-parole to take account of the age of minor who commit murders, and that is the kind of “substantive” rule that should not be limited to new cases.

S. Kyle Duncan, a Washington, D.C., lawyer representing Louisiana, opened by telling the Court that he had planned to talk only about the retroactivity question, “but I gather from the drifts of the argument that the Court has serious questions about jurisdiction.”  Although he said he would touch on that briefly, supporting the Court’s jurisdiction, it actually formed a major part of the exchanges he had with the Justices. 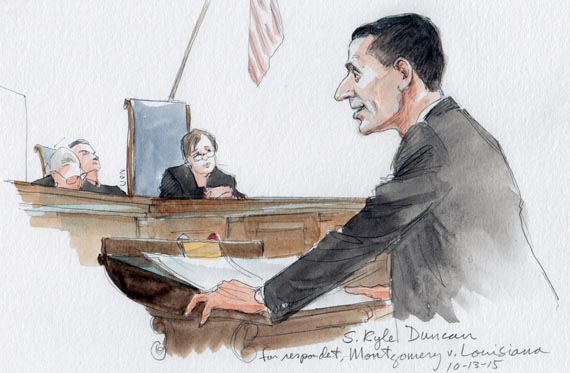 He noted that lower courts were reaching conflicting rulings on the retroactivity question, “so it seems to us that, as a practical matter, this Court ought to weigh in.  It’s going to weigh in sooner or later either on a federal habeas court or state court.”

When he chose to return to his basic argument that the Court should not apply the Miller decision to earlier cases, he was promptly interrupted by Justice Breyer pursuing further the jurisdictional question.

In short, the more the lawyers and the Justices talked, the more it seemed that the Court would have to spend most of its energy in deliberating whether it could decide, than in how to decide.