A new legal cloud over same-sex marriage in Kentucky?

Five deputy county clerks in Rowan County, Kentucky — the scene of the first major courthouse battle over a conflict between the Supreme Court’s view on same-sex marriage and religious objections to it —  told a federal judge that they will start issuing marriage licenses to same-sex couples on Friday morning.  They did so after the judge sent the county clerk herself to jail for contempt of court, and threatened her deputies with the same fate.

But even the judge conceded that those licenses, if issued,  may not be valid, although he refused to decide that issue and left it to the lawyers for the same-sex couples to confront.  The question of legality of new licenses came up during a series of hearings throughout the day Thursday in U.S. District Judge David L. Bunning’s court in Ashland, but did not get resolved and will linger.

With County Clerk Kim Davis in jail, under the judge’s order that she had illegally broken his order to end her “no marriage licenses” policy as a way of obeying her religious views against same-sex marriage, the dispute will be moving forward on several points and could return to the Supreme Court on at least some aspects.  Her lawyers said they will be appealing her contempt punishment, and they have two other appeals pending in lower courts. 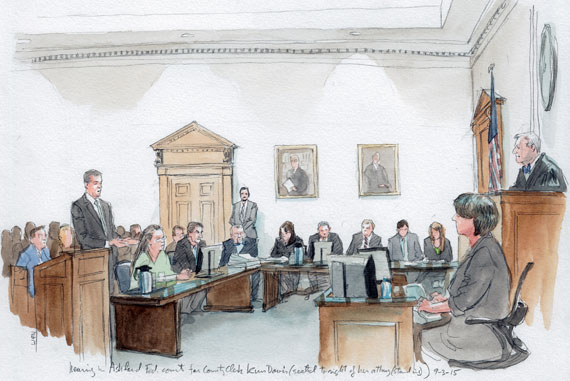 Davis’s religious complaint all along has been that, because Kentucky law requires her name and signature to be on every marriage license issued in her county, issuing licenses to any couples would involve her directly in authorizing same-sex couples to marry, which would violate her belief that God has made marriage an institution only for a man and a woman.  She thus adopted a no-licensing policy and ordered her deputies to follow the policy as well.

After Davis told the judge in person that she could not obey his order, the judge said she did not have that option as a public official.  He turned down the suggestion, made by lawyers for same-sex couples who had sued, that Davis should only face tough and escalating fines.  The judge said that, because Davis’s supporters would simply cover those fines for her, jailing was the only option to assure that she would obey his order.  She was turned over to U.S. marshals for jailing.

Among other points that Davis’s lawyers made to the judge about the obedience by her deputy clerks was that state law does not allow them to do so without her name and signature on the forms, and they repeated her vow not to provide that authorization..  Even so, the judge then obtained the promise from five of her six deputy clerks to reopen marriage licensing in their office on Friday, and he said he would tolerate no “shenanigans.”

One of the deputies, Davis’s son, Nathan, would not yield to the judge’s demand, but the judge chose not to punish him because other clerks would be available to issue licenses.  At least one same-sex couple told local news reporters that they would show up at the clerk’s office Friday, to apply for a license.

Local news organizations in the state have provided extensive coverage of the dispute, and increased their coverage on Thursday as several sessions in the judge’s court unfolded.

After the judge sent the clerk to jail, one of her lawyers, Roger K. Gannam, a senior staff lawyer with the advocacy group Liberty Counsel, told reporters outside the courthouse that they would immediately appeal her contempt citation.  Gannam was quoted as saying: “Today, for the first time in American history, an American citizen has been incarcerated for having the belief and conscience that marriage is a union of one man and one woman.”