Opinion analysis: Walking on a tightrope on Mideast policy

Insisting that it was staying out of Mideast politics and that it was not shutting Congress out of foreign policymaking, a divided Supreme Court on Monday struck down a thirteen-year-old law allowing Americans born in the bitterly contested city of Jerusalem to claim that they were born in Israel.  It was the only decision to be issued as the Court continued to move to finish its Term, perhaps by the end of the month.

Despite the Court’s efforts to narrow its ruling, this decision on passport policy may still play a role in the continuing tension between Israel and its Arab neighbors, and may contribute to ongoing sensitivity between the White House and Congress over major diplomatic issues.  There probably was no way to avoid either of those impacts in a ruling that resolved a sensitive modern question and decided one of the most enduring — and, until Monday, unanswered — questions about the meaning of the Constitution. 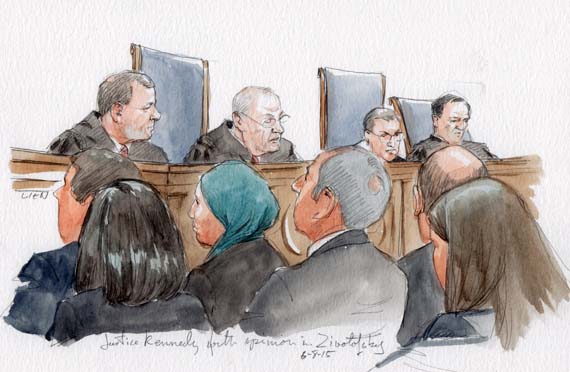 The ruling in Zivotofsky v. Kerry obviously was a difficult one for the Court: argued in early November, the case took more than seven months to prepare, emerging Monday in five separate opinions in a six-to-three split.   The decisive opinion, written by Justice Anthony M. Kennedy, carried the day, nullifying a 2002 law in which Congress had ordered the State Department to list Israel as the place of birth for U.S. citizens who had been born in Jerusalem, if they asked for that notation on official documents — an order that directly contradicted generations of presidential decisions to maintain U.S. neutrality on the question of which nation controls Jerusalem.

Before reaching the question of that specific law’s constitutionality, the Court for the first time in history ruled that the president has the exclusive power to decide what other foreign nations the United States will formally recognize for nation-to-nation dealings, and that Congress may not force the president to make a different choice about that.  In fact, most of Justice Kennedy’s thirty-page opinion was devoted to that core question about the Constitution’s distribution of foreign policy powers.

From that exclusive authority to “speak with one voice for the nation” about recognizing other governments, the Kennedy opinion drew the separate conclusion that what is said on U.S. passports that might make a statement about what nation is recognized as sovereign is up to the president.  While Congress has some role over passport policy, the opinion said, it simply has no authority to order the executive branch to issue a document that says something that the president has refused to say as official policy.

“If the power over recognition is to mean anything,” Kennedy wrote, “it must mean that the president not only makes the initial, formal recognition determination but also that he may maintain that determination in his and his agent’s statements.”

Thus, the 2002 law at issue fell, both on its attempt to allow “Israel” to be listed as the place where Americans began their lives upon birth in Jerusalem, and its attempt to compel U.S. consular officers to use “Israel” when reporting back home on the Jerusalem birth of a citizen.  Although both of those provisions were nullified, the Kennedy opinion’s analysis of constitutionality was devoted only to the passport issue.

The majority opinion was joined in full by Justices Stephen G. Breyer, Ruth Bader Ginsburg, Elena Kagan, and Sonia Sotomayor, although Breyer wrote a brief separate opinion saying that he would prefer it if the Court had stayed out of this dispute, treating it as a “political question” not subject to court review.

Justice Clarence Thomas, in a separate opinion, joined only the result that struck down the 2002 law as it applied to what is said on passports, but he refused to join the Kennedy rationale for that outcome.  In addition, Thomas said he would have upheld the law so far as it dictated the notation of place of birth on reports by U.S. consular officers abroad.

Chief Justice John G. Roberts, Jr., wrote a dissenting opinion for himself and Justice Samuel A. Alito, Jr.  Justice Antonin Scalia wrote a separate dissenting opinion, joined by both the Chief Justice and Justice Alito.  Justice Scalia, speaking from the bench following Justice Kennedy’s announcements, spoke passionately against the ruling, contending that the 2002 Jerusalem passport law “has nothing to do with” the recognition of foreign governments.

Although the Kennedy opinion amounted to a major constitutional and diplomatic victory for the office of the presidency, it did not go as far as the Obama administration had urged it to go in reaffirming presidential authority in the field of foreign affairs.

The administration had argued that the Constitution gives the president “exclusive authority to conduct diplomatic relations,” as well as “the bulk of foreign-affairs powers.”  In making that plea, the government lawyers had relied upon a sweeping statement by the Court, in the 1936 decision in United States v. Curtiss-Wright Export Corp., that the president acted as “the sole organ of the federal government in the field of international relations.”

The Court, Justice Kennedy stressed, “declines to acknowledge that unbounded power.”  To concede that the occupant of the White House has a broader power in this case than control over recognition of foreign governments would present “different issues” and was not necessary to decide this case, Kennedy said.

Even as the ruling nullified an important exercise of Congress’s legislative powers, the Kennedy opinion appeared to have gone out of its way, otherwise, to acknowledge significant congressional authority in the foreign policy field, and even over passport policy as a part of its authority to regulate citizenship and its general power to pass specific laws to carry out its broad grants of legislation power.

The historic constitutional dispute arose out of the request by the family of Menachem Binyamin Zivotofsky, who will turn thirteen in October, to list “Israel” on his passport because he was born to U.S. citizen parents while they were living in Jerusalem.  The State Department, following government policy on the neutrality of Jerusalem, refused to list “Israel” as his birthplace, and refused to report it as his birthplace on consular documents.

Joined by his parents, the boy sued to enforce the 2002 law that would grant them their wish about his passport notation.  After the Supreme Court, in an initial ruling in 2012, allowed the case to go forward in lower courts on the constitutionality of that law, a federal appeals court struck down the law as an invalid intrusion upon presidential power.   That is the result that the Supreme Court upheld Monday.