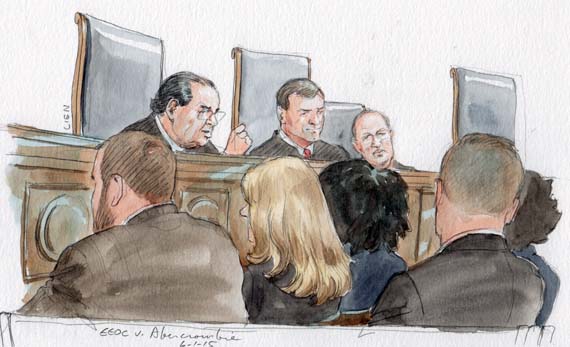 A job applicant whose faith dictates a personal practice that may contradict a company’s workplace rules now has a better chance of getting hired, even if the management’s rule is entirely neutral about religion, the Supreme Court ruled on Monday.  If the management has even an inkling about the applicant’s religious views, it may violate federal civil rights law by turning aside that would-be employee while enforcing a job rule, the Court indicated.

The eight-to-one ruling in Equal Employment Opportunity Commission v. Abercrombie & Fitch Stores gave a strong new level of civil rights protection against religious bias in employment.  The case involved a  young Muslim woman who wears a head scarf as a matter of her faith; she sued after failing to get hired at a “preppy” clothing store at a shopping mall in Tulsa seven years ago.

She had won a $20,000 damages verdict against the retailer, but that was overturned by the U.S. Court of Appeals for the Tenth Circuit.  The appeals court ruled that a company does not violate the ban on religious bias in the workplace unless the management actually knows, specifically, that a job applicant needs an exception from a work rule to satisfy religious dictates.  That ruling seemed to impose a duty on a job applicant to explicitly ask for a religion-based exemption from a work rule.

The Justices overturned that ruling, and sent the case back to apply the new legal approach the Court mandated for such cases.

Even if the applicant does not inform the management of a religious practice, the 1964 civil rights law may be enforced against any employer who refuses to make an exception for that worker, when that refusal is based on at least a suspicion or hunch that the worker follows such a practice and wants to keep doing so, even if contrary to company policy.

Justice Antonin Scalia wrote the Court’s main opinion.  In a significant footnote, the ruling left open the possibility that an employer may still violate the law by failing to hire someone who follows a religious practice, even if the employer were completely ignorant of that fact.

The footnote, and its implications, caused one member of the eight in the majority — Justice Samuel A. Alito, Jr. — to object in a separate opinion.  While he supported overturning the appeals court, he did so for his own reasons, rather than those of the Scalia opinion:  he would have made it clear that Abercrombie & Fitch can avoid a damages verdict if it had no knowledge of the young woman’s religious needs.  The retailer does have the option of making that argument when the case returns to the appeals court.

Justice Clarence Thomas dissented alone, supporting the Tenth Circuit’s decision.  Thomas, a former chairman of the EEOC, used his opinion to provide a lengthy essay on the evolution of employment discrimination law as it applied to the need to accommodate the religious beliefs of workers or job applicants.  He said Monday’s decision turns a legal ban on a policy that falls more heavily upon workers of one faith than others, into a ban on intentional bias without proof of an intent to discriminate.

The case grew out of a policy that Abercrombie & Fitch enforces in its clothing stores, which cater to a “preppy” or “casual” look.  Part of that rule is a ban on wearing a cap of any kind for those who work as sales clerks.  When seventeen-year-old Samantha Elauf applied for a sales job at a company outlet in Tulsa in 2008, she was wearing a head scarf as part of her Muslim practice.

Although there is a dispute about what the management knew about the applicant’s faith, the Court found on Monday that it had at least a suspicion that she needed a religious accommodation, and yet refused to hire her.  That was enough, the Scalia opinion said, to potentially make the company liable for refusing an accommodation.

Before the Court issued that opinion and others in argued cases, it issued a series of orders dealing with newly filed cases.  Although it did not grant any new cases for review, it did take other action.  These were some of the results:

** Over the dissents of three Justices, the Court turned aside a test case on the constitutionality of an Arizona voter-approved ban on release on bail of any undocumented immigrant who had been jailed on charges of a serious crime.  The ban, so-called “Proposition 100” adopted in 2006, had been struck down by the U.S. Court of Appeals for the Ninth Circuit.  The Supreme Court itself had refused last year to delay the Ninth Circuit’s ruling while an appeal was filed with the Justices.   The majority made no comment on Monday in denying review.  Justice Thomas, joined by Justice Scalia, wrote in dissent to protest what they called the Court’s increasing lack of respect for states’ legislative authority. Justice Alito also dissented, but made no comment in doing so.  The denied case was County of Maricopa v. Lopez-Valenzuela.

** Without full briefing and oral argument, the Court ruled in an unsigned opinion that two state officials in Delaware had legal immunity from a lawsuit by the family of an inmate who had committed suicide in his cell.  At the time of the incident, in November 2004, the opinion said, it was not clearly established in the law that inmates have a constitutional right to be screened as a suicide prevention measure.  The case was Taylor v. Barkes.

** The Court asked the U.S. Solicitor General to provide the federal government’s views on the case of Smith v. Aegon Companies Pension Plan.  The case involves a dispute among federal appeals courts on the right of a pension plan participant to choose the location of the court for filing a lawsuit to enforce rights under ERISA, the federal worker benefit law.  The issue is whether the terms of a plan on the proper venue for such lawsuits can override the participant’s choice about where to sue.   There is no deadline for the Solicitor General’s response.