If anybody gave out an award for “funnest” opinion of the year, yesterday’s opinion in Kimble v. Marvel Entertainment surely would be a strong contender. Justice Elena Kagan’s opinion for the Court addresses a relatively dry topic – whether the Court should overrule its 1964 decision in Brulotte v. Thys Co., in which the Court had imposed an absolute bar on patent licenses that call for royalties that extend beyond the expiration of the patent term. The answer is a simple one: the Court should not overrule the old case. 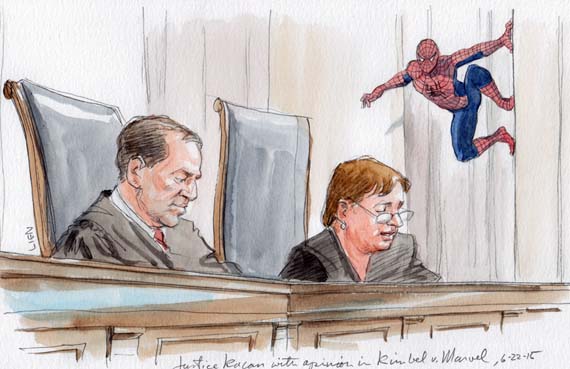 But she sprinkles the opinion with fanciful allusions to the subject matter of the patent dispute – a Spider-Man toy that shoots foam string from the palm of the hand. Her opinion describes the rights that patents grant as “superpowers,” the quality of stare decisis afforded statutory decisions as “superpowered,” and the type of justification required to overrule Brulotte as “superspecial.” Getting into the same spirit, Justice Samuel Alito in his dissent denies the need for such “super-duper” protection of the Court’s prior decisions. Suffice it to say that those “super” adjectives have not, so far as I can tell, previously graced the United States Reports.

To underscore the point, when she comes to the end of her opinion, describing the Court’s authority to “undecide” its prior decisions, she closes with a quotation from the apparently revered comic book: “[I]n this world, with great power there must also come—great responsibility.”

Putting the fun to the side, the opinion’s line of analysis passes over a number of points that are likely to give the case considerable importance in the future. I’ll pick two for purposes of this post. The most obvious is mentioned above: a move to narrow the Court’s appetite for overruling statutory cases. This is the third major case decided in the last thirteen months in which the Court has seriously addressed the possibility of overruling a prior statutory decision; it follows last Term’s refusal in Halliburton v. Erica P. John Fund to overrule Basic v. Levinson and this month’s refusal in Bank of America v. Caulkett to overrule Dewsnup v. Timm. But this is the case in which the Court writes at length to explain the considered reluctance that underlies those cases. Here, the Court emphasizes that the dispute “lies at the intersection of” the law of property and contracts. In that context, the Court goes on to explain, “considerations favoring stare decisis are at their acme . . . because parties are especially likely to rely on such precedents when ordering their affairs.” As discussed above, the Court characterized this as a “superpowered form of stare decisis” that “would need a superspecial justification to warrant reversal.” My guess is that those passages will be called into use frequently as a caution against the rejection of any statutory precedent that has even a tenuous connection to commercial activity.

A second involves the Court’s perspective on the Patent Act itself. In my earlier posts, I characterized the case as raising a question about the Court’s patent jurisprudence – whether the Court regards the Patent Act as an open-ended statute calling for largely judicial explication (like the Sherman Act) or a close-textured code like the Internal Revenue or Bankruptcy Codes, where the Court’s task is much more limited. The Court’s opinion squarely puts the Patent Act in the latter category. In response to the dissent’s argument that Brulotte is so distantly connected to the text of the Patent Act that it is not really a statutory case (not an unfair evaluation of Brulotte), the Court emphasized that the Patent Act is not like the antitrust laws, specifically because “the patent laws do not turn over exceptional law-shaping authority to the courts.” Similarly, in discussing the numerous criticisms of Brulotte as wrong-headed economic doctrine, the Court rejects the idea that patent jurisprudence does (or should) involve economic analysis. The Court would not even address the argument that Brulotte rested on “economic misjudgment,” reasoning that that Brulotte did not turn on the “likely competitive effects” of post-expiration royalties, because the patent laws “do not aim to maximize competition (to a large extent, the opposite).” We can expect the Federal Circuit to notice both of those points.

PLAIN LANGUAGE: The owner of the patent has the right to stop anybody else from using the patented invention, but only until the patent expires (about twenty years). Patent owners often agree to let others use the invention if the users pay “royalties” to the patent owner. Sometimes, the user might agree to pay royalties that continue even after the patent expires. This might be because the owner has many patents and the user wants to cover all of them with one contract. Or this might allow the user to make smaller payments in early years in return for larger payments in late years. The Supreme Court held more than fifty years ago that users cannot agree to pay royalties after the patent expires. If they sign a contract to pay those royalties, the contract is invalid. Kimble in this case asked the Supreme Court to change that rule. The Supreme Court refused. The Court explained that it almost never overrules decisions that interpret statutes.