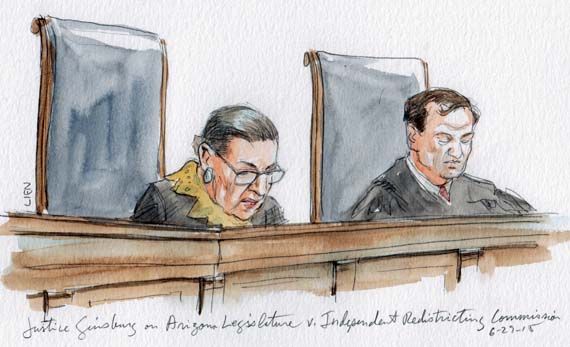 Justice Ginsburg with opinion of the Court (Art Lien)

Unable itself to find a constitutional way to curb the habits of lawmakers in crafting new election districts to give their party an advantage, a divided Supreme Court ruled on Monday that a state’s voters can do that if they choose to hand over the task of fashioning congressional district boundaries to an independent commission.

The five-to-four decision in an Arizona case does not immediately control the situation in other states, but does empower voters where they have direct legislative power to use it to try to reduce partisan control of elections for at least one house of Congress.  At least six other states do it in the way that Arizona does.

In making its decision, the Court noted that studies show that giving the task of drawing election districts to nonpartisan or bipartisan commissions leads to “districts both more competitive and more likely to survive legal challenge.” It has been noted widely that, due mainly to partisan gerrymandering by state legislatures in recent years, not many seats in today’s House of Representatives remain competitive at election time.

The majority’s opinion, written by Justice Ruth Bader Ginsburg, displayed a keen awareness of the activity of partisan gerrymandering, and noted that even the Founder deemed the “father of the Constitution,” James Madison, was worried about it in the dawn of the constitutional era.

“The problem Madison identified,” Ginsburg wrote, “has hardly lessened over time.”  She made a pointed reference to “the current climate of heightened partisanship.”

In fact, she referred to party-driven redistricting as a “problem” in the very opening words of her opinion, and noted immediately that the Supreme Court had sharply criticized the practice even as it chose to do nothing itself about it because it could not find a “workable standard” to support a constitutional limitation.

While putting the problem in the hands of a state’s voters, if they are willing, the decision also amounted to a strong reaffirmation of the concept of direct democracy — that is, giving a state’s voters the authority to pass laws that they want and the authority to veto those that their legislature passes but they do not want.  The decision gave an expansive interpretation of the phrase “state legislature” in the federal Constitution and in a federal law dividing up power between Congress and the states in writing laws to govern elections to Congress and the presidency.

The availability of that legislative power in the people, though, depends upon how each state has organized its government.  There is no national constitutional requirement to confer that power on the voters.

Justice Ginsburg noted that the movement toward direct democracy, which began in 1898 in South Dakota, has now reached twenty-one states for the initiative or direct lawmaking power, and eighteen states to adopt amendments to the state constitution.

In Arizona, the voters in 2000 reacted to a series of troubles in drawing new election districts by approving Proposition 106.  Every redistricting cycle in the state since the 1970s, Justice Ginsburg noted, had “sparked controversy,” with several plans failing in court tests.

The ballot measure specifically targeted “the practice of gerrymandering” and cited a need to improve voter and candidate participation in elections.  The state constitution was altered to take the congressional districting power away from the legislature, and turn it over to a five-member Arizona Independent Redistricting Commission.

While the state legislature can make suggestions, the commission need not follow them, and the maps that it draws for electing members of the Arizona delegation in the House of Representatives are binding and cannot be altered by the legislature.

Stripped of its former authority to craft those districts, the state legislature sued in federal court, and the case went to a special three-judge district court.  That court split two to one in upholding the transfer of the congressional districting power to the independent commission.

The Court ruled that the legislature had a right to sue, because it was losing substantial authority under Proposition 106, and concluded that the transfer of redistricting power did not violate either the Constitution or federal law.

Besides issuing the Arizona decision, the Court took another important action on elections, turning aside a claim that the Constitution requires the federal government to include on the nationwide voter registration form an individual state’s requirement that voters must prove with documents that they are citizens before they may register to vote.

The denial of review in Kobach v. U.S. Elections Assistance Commission appeared to bring to an end a significant controversy over how states may enforce a proof-of-citizenship requirement for would-be voters.  Two years ago, the Court had ruled that, while states must use the federal voter registration form, they were free to try to persuade election officials to include a supplement that would help enforce a state proof-of-citizenship law.

Two states, Arizona and Kansas, failed to get the Elections Assistance Commission to add a state-specific part of the registration form, saying they had other ways to enforce that kind of requirement.  The two states then took the dispute back to the Supreme Court, arguing that two parts of the Constitution — the Elections Clause and the Seventeenth Amendment — require federal officials to defer to state officials’ view of what they need to do to enforce their voter-eligibility laws.

The Justices refused to hear the claim, without giving any reason.  That leaves it to the two states to devise their own ways to enforce their requirement.