Opinion analysis: A civil rights law made broader, but not too broad 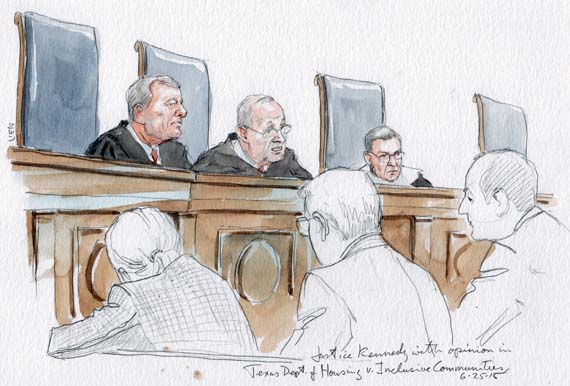 Justice Kennedy with opinion of the Court (Art Lien)

Warning that even civil rights laws that serve equality can lead to too much focus on race, a deeply split Supreme Court ruled on Thursday that a fair housing law passed nearly a half-century ago allows lawsuits on a broader legal theory.  Discrimination in housing can be attacked even if a government agency or private real estate firm or developer did not engage intentionally in bias, the Court declared by a five-to-four vote.

The ruling in the case of Texas Department of Housing v. Inclusive Communities Project had strong signs of a compromise as the Court finally was able to decide an issue that it had twice before agreed to review, but then each of those cases was settled before the Justices could rule.

Under the new decision, minorities get significant protection against bias as they seek to buy or rent homes — reaffirming protection that many lower-court rulings already had provided — but the providers of housing will gain considerable leeway in how they set up or manage housing opportunities in cities and suburbs without facing heavy legal problems.

The ruling focused on interpreting the Fair Housing Act, passed by Congress in 1968 as part of a wider-ranging civil rights law, in the wake of the assassination of the famed civil rights leader, the Rev. Martin Luther King, Jr., and warnings by a presidential commission that had studied urban riots, declaring that America was moving toward “two societies, one black, one white — separate but unequal.”

The Act makes it illegal for anyone to refuse to sell or rent a house or apartment after receiving a genuine offer, or to fail to make available or deny a residence to a person “because of race, color, religion or national origin.”  Congress later added family status to the categories protected from some refusals.

Although it has always been clear that the Act outlawed housing discrimination when the landlord, developer, or government agency acted with the specific intent to discriminate, a question has lingered whether the law also allowed claims of “disparate impact” — that is, claims that a given housing policy or decision had a more negative impact on race (or other protected categories) than on others seeking housing, even though there was no proof of an intent to discriminate.

Every federal appeals court that had ruled on the issue had upheld such “disparate impact” claims, and Congress was aware of that when it amended the Act in 1988 without changing its basic terms.  That fact figured importantly in Thursday’s decision, with the Court majority concluding that Congress accepted that such claims were valid under the law, and did nothing to bar them.

The issue had reached the Supreme Court in a new case — the third try to get the Justices to decide the issue — from Texas, involving claims by a group seeking to desegregate racial housing patterns in the Dallas metro area that a state agency was placing too many subsidized housing projects in minority-dominated neighborhoods, avoiding putting projects in white-dominated suburbs.  The argument was that the agency’s policies had a “disparate impact” on racial minority occupants of the projects.

Justice Anthony M. Kennedy, writing for the Court majority in allowing such claims under the 1968 law, said that “vestiges of residential segregation . . . . remain today” and some of that can be “traced to conditions that arose in the mid-20th Century.”  He also noted that major cities have come to rely upon the broader theory of the housing law’s reach in order to deal with those social and cultural problems.

But the main thrust of his reasoning was the strength of the long line of lower court rulings upholding the “disparate impact” theory on enforcement of the housing law, and the implications in 1988 that Congress was content to leave unaltered that understanding.

Much of the Kennedy opinion was devoted to justifying the embrace of that theory.  But, on the closing pages, that opinion raised significant question about lawyers and lower courts pushing the theory so far that it begins to compel providers of housing to make race a central focus of their policy, raising legal problems in the private sector and constitutional problems for government housing efforts and projects.

That part of the opinion spelled out fairly strict demands on what those making “disparate impact” claims must show — a mere disparity in statistics on race in housing opportunity would not be enough, for example — before a developer, real estate firm, or government housing agency even had to defend against such a claim.   Courts must not turn “disparate impact” claims, the opinion emphasized, as intrusive second-guessing of policies that were not driven by intentional race bias.

It will now be up to lower courts, as those kinds of claims continue to be filed, to apply the limits and the caution that the Kennedy opinion mandated.

Justice Clarence Thomas wrote a dissenting opinion for himself, arguing against “disparate impact” as a theory in enforcing other federal civil rights laws.

Justice Samuel A. Alito, Jr., also wrote a dissenting opinion, arguing that the Court had made “a serious mistake” in its interpretation of the housing law.  He noted that Kennedy had made some efforts to narrow the potential impact of the ruling, but nonetheless contended that it remained flawed.