Two years ago, Justice Anthony Kennedy joined the Court’s four more liberal Justices to strike down a provision of the federal Defense of Marriage Act defining “marriage,” for purposes of over a thousand federal laws and programs, as a union between a man and a woman.  The Court’s ruling in United States v. Windsor meant that, going forward, same-sex couples who were married in states where same-sex marriages were legal received the same treatment under federal law as married opposite-sex couples.  Today, on the second anniversary of that decision, Justice Kennedy again joined Justices Ruth Bader Ginsburg, Stephen Breyer, Sonia Sotomayor, and Elena Kagan in holding both that states must allow same-sex couples to marry and that they must recognize same-sex marriages from other states.  Let’s talk about the decision in Obergefell v. Hodges in Plain English. 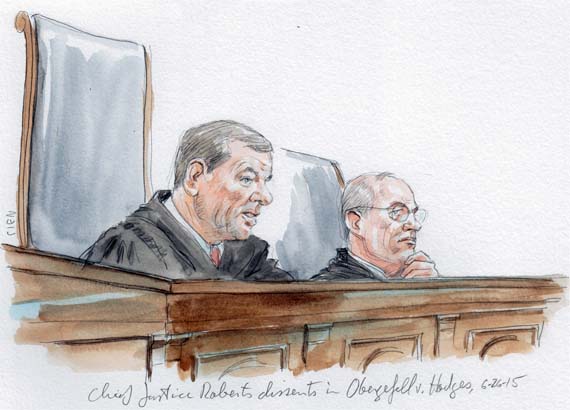 Justice Kennedy begins his opinion for the Court with a paean to the institution of marriage:  he describes it as “essential to our most profound hopes and aspirations,” “sacred to those who live by their religions” and offering “unique fulfillment to those who find meaning in the secular realm.”  But it is also, he continues, an institution that “has evolved over time” from an “arrangement by the couple’s parents” to a voluntary agreement between a man and a woman.  Similarly, although being gay was once considered an “illness,” public attitudes have shifted significantly.

The Supreme Court, Kennedy’s opinion explains, has long recognized the right to marry as a fundamental right.  And although until today it has always done so in the context of opposite-sex couples, he continues, all of the same principles on which the Court has relied in cases involving opposite-sex couples apply equally to same-sex marriage and the recognition of out-of-state same-sex marriages.  For example, being able to decide whether to get married is an important part of an individual’s autonomy regardless whether you are the same sex as your intended spouse.  Along much the same lines, marriage is a unique way for two individuals – in both same- and opposite-sex partnerships – to demonstrate their commitment to one another.

The Court has also protected the right to marry, the opinion notes, because of its importance for children and families.  Laws prohibiting same-sex couples from marrying, the opinion concludes, “harm and humiliate the children” of those couples by depriving them of both financial benefits and – even more importantly – “the recognition, stability, and predictability marriage offers.”  The Court takes pains, however, to make clear that a right to marry is fundamental even for couples who cannot or do not want to have children.  And more broadly, the Court continues, marriage is “a building block of our national community” in so many ways, from the moral support given to married couples to the legal benefits and rights that they enjoy.  “There is no difference between same- and opposite-sex couples with respect to this principle,” the Court emphasizes.

The Kennedy opinion then takes on the principal rationale on which the lower court relied in upholding the state bans on same-sex marriage – the idea that the political process, rather than unelected judges, should be allowed to play out and decide this question.  Kennedy begins by pushing back against the idea that it is, in essence, too soon to decide this question:  there has already been, the opinion maintains, plenty of discussion of the same-sex marriage issue.  The very reason that we have a Constitution, he stresses, is that some rights are too important to leave up to the democratic process.  Moreover, same-sex couples should not have to wait to have their rights recognized:  the husband of lead plaintiff Jim Obergefell, for example, has already died, and the children of same-sex couples are growing up without their parents being married.

The Kennedy opinion closes with an assurance that churches and other groups that oppose same-sex marriage on religious grounds can continue to express their views.  But that pledge may not provide much legal protection for a florist who does not want to furnish flowers for a same-sex marriage ceremony, for example; we can expect the precise scope of this protection for religious beliefs to be the focus of lawsuits in the not-too-distant future.

Chief Justice John Roberts not only dissented from the Court’s ruling but also read a summary of his dissent from the bench.  It was the first time that he has done so in his ten Terms on the Court, and it signaled how strongly he disagreed with the Court’s ruling.  Roberts forcefully criticized the majority for side-stepping the democratic process and declaring that same-sex couples have the right to marry when, in his view, such a right “has no basis in the Constitution.”  The Court’s decision, he complained, “orders the transformation of a social institution that has formed the basis of human society for millennia, for the Kalahari Bushmen and the Han Chinese, the Carthaginians and the Aztecs.”  “Just who,” Roberts laments, “do we think we are?”  The other three Justices echoed Roberts’s sentiments, sometimes in even more strident terms:  Justice Antonin Scalia characterized the decision as a “judicial Putsch” and suggested that, before he signed on to an opinion like the majority’s, “I would hide my head in a bag.”

Today’s ruling means, without question, that same-sex couples now have the exact same right to marry as their opposite-sex counterparts, throughout the country.  That right became effective shortly after ten o’clock this morning.  Same-sex marriages may not begin happening immediately all over the country, depending on long it takes for states to implement the ruling, but it’s now the law.