Since it was enacted in 2010, Republicans in Congress have voted dozens of times to repeal the Affordable Care Act, President Barack Obama’s signature legislative achievement.  With no success on the legislative front, opponents of the ACA have tried their luck in the courts, but that avenue hasn’t proven any more fruitful.  Three years ago, the Court upheld the Act’s individual mandate, which compels everyone to buy health insurance or pay a penalty, against a challenge based on the argument that Congress lacked the power to impose such a requirement.  And today the Court turned back a challenge to the subsidies that many people receive to pay for their health insurance, ending a case that had the potential to seriously undermine the ACA, if not dismantle it altogether.  Let’s talk about today’s decision in King v. Burwell in Plain English. 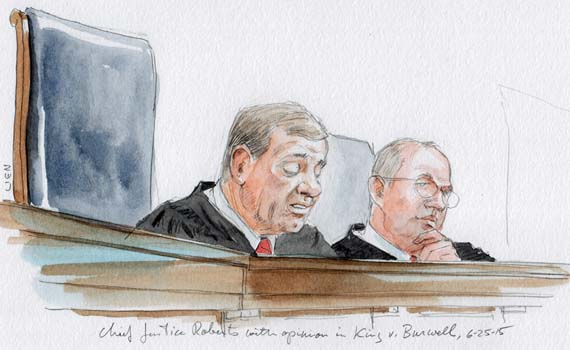 To understand what’s going on in this case and why today’s decision matters, it may be useful to start with a little bit of background about the Affordable Care Act more generally.  There are three key features to the law.  The first is what’s known as the “non-discrimination rule”:  health insurance companies must sell insurance to everyone, even people who are currently sick or have a history of chronic illnesses, at a reasonable price.

The second is the individual mandate, which requires everyone to obtain health insurance or pay a penalty.  This provision ensures that there are enough healthy people in the insurance pool to balance out the sick people:  if healthy people aren’t required to buy health insurance, the thinking goes, but they know (because of the non-discrimination rule) that they can do so at any time, they will wait and only buy insurance if they get sick.

The subsidies are the third pillar of the system created by the ACA.  Many people get health insurance through their employers, but the people who don’t – because they are self-employed or unemployed, for example – need some way to buy it.  So the ACA provides for the creation of an online marketplace, known as an “exchange,” in each state. The drafters of the ACA had originally expected each state to set up its own exchange, but after many states declined to do so, the federal government (as authorized by another provision of the ACA) stepped in to create them instead.  And to ensure that everyone can afford the health insurance that they are now required to buy, the ACA also provides for subsidies for people who buy their health insurance through an exchange.  Here is the heart of the dispute:  one provision of the ACA indicates that subsidies are only available to people who purchase their health insurance on an exchange “established by the State.”  The plaintiffs in the case argued that this means that subsidies are not available to the millions of people who purchased their health insurance on an exchange that was created by the federal government, because the federal government is not a “State.”

Today, by a vote of six to three, the Court agreed with the Obama administration that the subsidies are available for everyone who bought health insurance through an exchange, no matter whether that exchange was created by a state or the federal government.

Chief Justice John Roberts wrote the Court’s opinion, which Justices Anthony Kennedy, Ruth Bader Ginsburg, Stephen Breyer, Sonia Sotomayor, and Elena Kagan all joined.  The Court acknowledged that, at first blush, the phrase “established by the State” does not appear to include the federal government.  After all, the ACA specifically defines “State” as “each of the 50 States and the District of Columbia.”  But other parts of the law, the Court explained, suggest that the “meaning of the phrase ‘established by the State’ is not so clear.”  For example, one provision that defines who is qualified to purchase insurance on an exchange refers to an individual who “resides in the State that established the Exchange” – which on the plaintiffs’ reading would mean that no one would be qualified to buy health insurance on exchanges established by the federal government.

And if the phrase “established by the State” is in fact not clear, the Court continued, then the next step is to look at the Affordable Care Act more broadly to determine what Congress meant by the phrase.  And when you do that, the Court reasoned, it becomes apparent that Congress actually intended for the subsidies to be available to everyone who buys health insurance on an exchange, no matter who created it.  If the subsidies weren’t available in the states with federal exchanges, the Court explained, the insurance markets in those states simply wouldn’t work properly:  without the subsidies, almost all of the people who purchased insurance on the exchanges would no longer be required to purchase insurance because it would be too expensive.  This would create a “death spiral,” in which insurance premiums would go up and enrollment would go down.  It is “implausible,” the Court concluded, “that Congress meant the Act to operate in this manner.”

Justice Antonin Scalia dissented, in an opinion joined by Justices Clarence Thomas and Samuel Alito that began by describing the majority’s conclusion as “quite absurd.”  The tone only gets even more strident from there, with Scalia lamenting that “words no longer have meaning if an Exchange that is not established by the State is ‘established by the State.’”  And he concludes by complaining that the majority’s opinion– as it did three years ago in upholding the individual mandate – “changes the usual rules of statutory interpretation for the sake of the Affordable Care Act.”  Perhaps, he suggested, “We should start calling this law SCOTUScare.”

A ruling for the challengers today could have had effects far beyond the insurance markets and the wallets of people who would no longer receive subsidies:  it almost certainly would have carried over into both the political arena – as the people who could no longer afford health insurance directed their frustration at elected officials – and the stock market.  But by siding with the Obama administration, the Court effectively maintains the status quo, with the subsidies continuing to flow to low- and moderate-income Americans and, more generally, all three key provisions of the ACA remaining intact.  Opponents of the ACA will have to re-focus their efforts to repeal the Act on retaining Republican control of Congress and retaking the White House from Democrats in 2016.

And if you are tired of hearing about the Supreme Court and the Affordable Care Act, I have bad news for you:  the Act’s requirement that businesses provide their female employees with health insurance that includes access to birth control could be back before the Justices again soon, this time on a challenge by non-profit religious groups who believe that the rule violates their religious beliefs.  If it is, we’ll be back to report on it in Plain English.