A “view” from the Courtroom: A marriage celebration 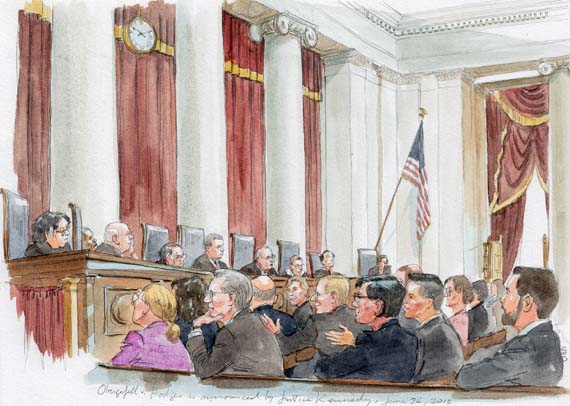 It’s Friday, a rare day for Supreme Court opinions, and some have speculated that the two-year anniversary of the Court’s decision in United States v. Windsor would be an appropriate day for deciding this Term’s same-sex marriage cases. Others say, no, the Court does not think of such things.

In any event, the Courtroom is filled with advocates for the recognition of same-sex marriage. Seated in a group in the bar section are Mary L. Bonauto and Douglas Hallward-Driemeier, who argued the two questions in the consolidated cases, and other advocates and supporters such as Susan L. Sommer of Lambda Legal Defense and Education Fund, Paul M. Smith, and Pamela S. Karlan, of Stanford Law School and (temporarily) the U.S. Department of Justice, who did not have to sleep outside in the bar members’ line, as she did for oral arguments in the case.

We ask these advocates if they know whether any of the top legal officers of Kentucky, Michigan, Ohio, or Tennessee, the states whose prohibitions of same-sex marriage are at issue before the Court, are at the Court today. We’re told no, we don’t think so.

John C. Eastman, the chairman of the board of the National Organization for Marriage, a group in favor of traditional marriage, is in the Courtroom, we’re told. Brian S. Brown, the president of that group and an outspoken advocate for that side, is outside the Court, we learn later. Jordan Lorence, Austin Nimocks, and Kellie Fiedorek of the Alliance Defending Freedom, another organization that opposes same-sex marriage, are here today, too.

As U.S. Solicitor General Donald B. Verrilli enters the Courtroom, he walks over to greet the same-sex marriage advocates and Smith, who argued and won the 2003 decision in Lawrence v. Texas, striking down same-sex sodomy laws.

In the public gallery, we’re told that James Obergefell is here again, but we can’t see where he is. There are two other Ohio plaintiffs here, Georgia Nicole and Pamela Yorksmith. There are also two plaintiffs from the Kentucky case – Gregory Bourke and Michael De Leon of Louisville, and their two teenage children.

Retired Justice John Paul Stevens enters and takes the VIP seat next to Reporter of Decisions Christine L. Fallon. Other Court employees file in, and the law clerks’ customary vestibule is filling up as well.

At 10 a.m., the Court takes the bench, and the Chief Justice announces that Justice Anthony M. Kennedy has the decision in Obergefell v. Hodges.

Kennedy gives some background, but he doesn’t keep up the suspense too long as to how this will turn out.

“Since the dawn of history, marriage has transformed strangers into relatives, binding families and societies together,” he says, adding a mention of “millennia” as well, a word he used in oral argument that caused some consternation about same-sex marriage advocates.

“Over the past half-century, following substantial cultural and political developments, same-sex couples began to lead more open and public lives and to establish families,” Kennedy says.

“Like choices concerning contraception, family relationships, procreation, and childrearing, all of which are protected by the Constitution, decisions concerning marriage are among the most intimate that an individual can make,” he says.

“By virtue of their exclusion from that institution, same-sex couples are denied the constellation of benefits that the States have linked to marriage,” Kennedy continues. “The limitation of marriage to opposite-sex couples may long have seemed natural and just, but its inconsistency with the central meaning of the fundamental right to marry is now manifest.”

By 10:07, several of the same-sex marriage advocates in the bar section are wiping away tears.

“These considerations lead to the conclusion that the right to marry is a fundamental right inherent in the liberty of the person, and under the Due Process and Equal Protection Clauses of the Fourteenth Amendment couples of the same-sex may not be deprived of that right and that liberty,” Kennedy says. “The Court now holds that same-sex couples may exercise the fundamental right to marry.”

He goes on, in an eloquent vein, not the more businesslike tone he took with his announcement in United States v. Windsor, for another minute or two. And then what everyone is waiting for: the line-up. Kennedy is joined by Justices Ruth Bader Ginsburg, Stephen G. Breyer, Sonia Sotomayor, and Elena Kagan.

Roberts leans forward a bit to deliver a dissent from the bench for the first time.

“From the dawn of human history,” he says, marriage has been a social institution that has formed the basis of human society for millennia, including for the Kalahari Bushmen and the Han Chinese.

“But today five lawyers have ordered state to change their definition of marriage,” Roberts says. “Just who do we think we are? I have no choice but to dissent.”

The Chief Justice goes through his dissent at some length. He notes that public opinion has been shifting rapidly on same-sex marriage, including in Maine, where in 2012 voters reversed the result of a referendum from just three years earlier that had upheld traditional marriage.

“However heartened the proponents of same-sex marriage might be on this day, it is worth acknowledging what they have lost, and lost forever: the opportunity to win the true acceptance that comes from persuading their fellow citizens of the justice of their cause,” Roberts says. “They lose this just when the wind was at their backs.”

“If you are among the many Americans—of whatever sexual orientation—who favor expanding same-sex marriage, by all means celebrate today’s decision,” the Chief Justice says. “Celebrate the achievement of a desired goal. Celebrate the opportunity for a new expression of commitment to a partner. Celebrate the availability of new benefits. But do not celebrate the Constitution. It had nothing to do with it.”

“I respectfully dissent,” he adds.

The same-sex marriage advocates are ready to celebrate, despite the Chief Justice’s point. But not so fast. Roberts announces that Justice Scalia has the opinion in Johnson v. United States. The case is about sentencing under the Armed Career Criminal Act.

“Don’t go away,” Scalia commands, in a tone that quickly breaks the tension of the Chief Justice’s dissent. Everyone laughs, even to the point of a second ripple of laughter.

Scalia goes on at some length in this eight-to-one decision in a case that was argued and re-argued this Term. The bottom line is that imposing an increased sentence under the ACCA’s “residual clause” violates due process.

When Scalia is finished, the Chief Justice makes the announcement indicating that the Court is ready to finish the Term, by announcing its final three decisions.

“The Court will next sit on Monday morning at 10 o’clock,” he says. “At that time, we will announce all remaining opinions ready during this Term of the Court.”

As Court breaks, there is the brief sound of one person clapping – no more than one or two claps, really — before decorum prevails. Outside the building, a crowd that has grown immensely over the last hour will briefly spill from the sidewalk to the Court’s own plaza. Though demonstrations of any kind are officially forbidden, this celebration is allowed to run its course.