A view from the courtroom: The new attorney general appears before a “very busy” Court 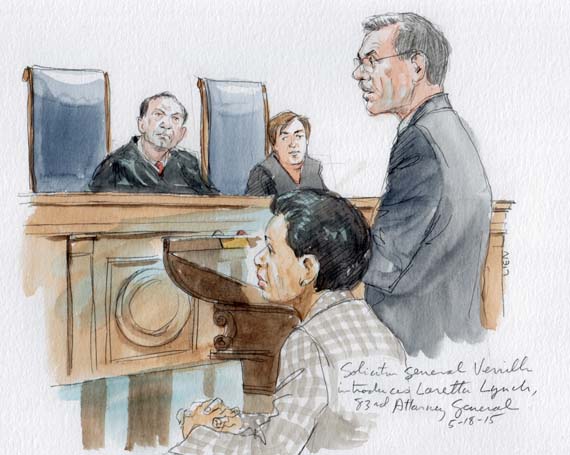 The Court is back in session today after its last extended (two-week) recess of the Term. So from now until the end (whenever that is), there will almost certainly be orders and opinions every Monday. (Except for next week, which is Memorial Day, so the Court will convene on Tuesday.) And if past practice is a guide, by mid-June the Court will add more opinion days in addition to Mondays.

This is also a time of year when some of the Justices are out of town on opinion days, attending circuit conferences, commencement ceremonies, and the like. Justices Clarence Thomas and Sonia Sotomayor are absent today.

With arguments completed last month, there are thirty-four pending cases going into today. The Court will make a significant dent in that number before the day is out. But first, there is some ceremonial business.

Donald B. Verrilli, Jr., the solicitor general, says, “Mr. Chief Justice, and may it please the Court. I have the privilege to present to the Court the eighty-third Attorney General of the United States, the Honorable Loretta Lynch of New York.”

Lynch, who is sitting alone at one of the Court’s counsel tables, rises and moves to the lectern.

Chief Justice Roberts, looking down to read from a scripted passage, recognizes her. “General Lynch, on behalf of the Court, I welcome you as the Chief Legal Officer of the United States and as an officer of this Court. We recognize the very important responsibilities that are entrusted to you. Your commission as Attorney General of the United States will be noted in the records of the Court. We wish you well in the discharge of the duties of your new office.”

Then, rather than sitting back down to hear some Supreme Court decisions, Lynch makes her way to the side hall to depart and turn back to her important responsibilities. She is surely within earshot as Roberts proceeds to decisions by announcing that Justice Elena Kagan has the opinion of the Court in Henderson v. United States.

Lynch will leave it to Solicitor General Verrilli and his staff to deal with a unanimous loss for the federal government in a case about a federal statute that deals with possession of firearms by a felon. The Court today rejects the government’s “expansive idea of constructive possession” in cases involving whether courts may transfer a felon’s firearms to a third party.

The scene is reminiscent of when President Obama’s first attorney general, Eric Holder, was recognized by the Court on April 22, 2009. On that day, Holder said his thank you to the Chief Justice and was heading out the door even as Roberts announced that he had the opinion in a case captioned Nken v. Holder. That decision, about a federal court’s powers to stay the removal of an alien, was also a loss for the government.

Opinions today will go on for about a half-hour. After Justice Kagan’s announcement in Henderson, Justice Samuel A. Alito, Jr., announces the Court’s decision in Comptroller v. Wynne and City and County of San Francisco v. Sheehan.

Next, Justice Stephen G. Breyer describes the first of his two opinions today, Tibble v. Edison International, as being “somewhat more technical” than the last one of Justice Alito’s. It’s an ERISA case, so he’s right.

Breyer launches into his other opinion by saying, “the second case is also technical.” He is about to dive into the details, seemingly playing his own version of “Wait, Wait … Don’t Tell Me!” with regard to which case he’s talking about. (That’s the NPR quiz show on which Breyer has been a guest.)

“Oh, it’s called Coleman v. Tollefson,” he says. For a unanimous decision on the rules about what counts as a frivolous federal court action, he goes on at some length.

Justice Ruth Bader Ginsburg has the decision in Harris v. Viegelahn, about the treatment of wages earned by a debtor after he has filed for bankruptcy.

When she finishes, there are, by seniority, still four Justices left from whom we could hear from on this heavy day. But six is enough.

“So, you see, we’ve been very busy,” the Chief Justice says, drawing chuckles from the crowded courtroom.

Recommended Citation: Mark Walsh, A view from the courtroom: The new attorney general appears before a “very busy” Court, SCOTUSblog (May. 18, 2015, 2:01 PM), https://www.scotusblog.com/2015/05/a-view-from-the-courtroom-the-new-attorney-general-appears-before-a-very-busy-court/