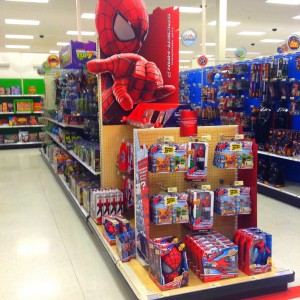 It’s patent day at the Court on the last day of March, with a pair of arguments in patent cases. First up is Kimble v. Marvel Enterprises. You should be forgiven if the style of the case leads you to expect a copyright or trademark case involving one of Marvel’s characters. But no. This is a patent case, involving a patent for a toy, which could be (and has been) used for a Spider-Man toy that allows children to shoot foam string in the way that Spider-Man might shoot a web.

The parties fell into a dispute when Marvel (the deep-pocket defendant) made such a toy, having previously met with Kimble (the inventor). After several years of litigation, the parties settled. In the settlement, Kimble conveyed the patent to Marvel, in return for royalties of three percent of product sales. Perhaps because Marvel is more accustomed to litigation about copyright and trademark issues, Marvel’s counsel (like Kimble’s) apparently was unaware of the Supreme Court’s 1964 decision in Brulotte v. Thys Co., holding that a patent-holder cannot collect royalties after the patent expires.

When the parties fell into dispute again several years later, Marvel’s counsel had learned of Brulotte and took the position that it would not owe any royalties after the patent expired in 2010. The district court and the Ninth Circuit agreed, compelled by Brulotte. The Ninth Circuit thought it appropriate to write a blistering opinion apologizing for its “reluctant” application of the “frequently-criticized” and “counterintuitive” decision in Brulotte, bemoaning its “economically unconvincing” rationale. Spurred by that opinion, Kimble sought review on the question whether the Court should overrule Brulotte. On inquiry, the Solicitor General recommended that the Court deny review, but the Court (certainly with plenty of time on its hands for the March and April calendars) agreed to hear the case.

So how do you write a brief when the question presented is whether the Court should overrule a long-standing statutory precedent? You needn’t waste any time with unpersuasive arguments to distinguish the precedent, of course, but you have to come up with a strategy for overwhelming it head on. Kimble takes the strategy of presenting Brulotte as resting on three separate premises, demolishing each of those premises, and portraying a broad and long-standing agreement among academics that the decision is fundamentally wrong-headed.

As it turns out, the first point is the most interesting one. Kimble contends that because parties are contracting with knowledge of the patent’s expiration, contracts that call for royalty payments in later years, rather than earlier years, are simply shifting the time of payment from early to late. Kimble brings to bear many reasons why it would be important to let innovators shift the bulk of royalties to a later date – most obviously to increase cash flow during what sometimes is a long-period of pre-revenue development.

The second and third points (about competition policy and antitrust policy) are less interesting, because they present the relatively easy point that Brulotte stands out as a relic of the type of antitrust decision-making characteristic of the Court of the 1960s. Antitrust law and theory has moved on to something much more nuanced and much more ready to consider the possibility of pro-competitive use of once-condemned contracting practices. Imagine page-long footnotes listing the dozens of scholars that have condemned Brulotte on this point and you have the sense of the argument.

Marvel’s strategy is intriguing, because it doesn’t actually join issue with much of what Kimble says. Marvel instead presents an almost entirely distinct line of reasoning. First, not too surprisingly, Marvel leads with the high threshold for overruling a statutory precedent. It helps a good deal, I expect, that Congress has amended the Patent Act quite frequently and indeed has held hearings on this topic but never taken action. The argument, basically, is that the Patent Act is one of those detailed, specific statutes (like the securities laws and the bankruptcy code) which the Court expects Congress to step in and change as appropriate; it bears no resemblance to statutes like the Sherman Act, in which Congress offers vague generalities and lets the courts fill in the blanks. Now, truth be told, Brulotte is pretty much a fill-in-the-blank kind of issue. The doctrine of patent misuse has no obvious textual hook in the Patent Act, and Brulotte’s application of that doctrine to post-expiration licensing is no different. It underscores this point that Kimble’s brief, in the “Statutory Provisions Involved” section, states “None.”

So that particular point definitely needs to be there, but ultimately I’m not sure how persuasive it is. Where Marvel scores a lot of points is in its discussion of Brulotte on the ground. To hear Marvel tell it, Brulotte permits all sorts of things, including royalties paid long after the patent expires. So if the parties want to pick a number today for a license fee, they can amortize that over any period they want – five years, ten years, the remaining patent term, ninety-nine years. The only thing you can’t do is make the post-expiration payments depend on the post-expiration sales. But there apparently are a great variety of things you can do, which seem to serve the interests that Kimble pressed. Underscoring the point (which isn’t hard to believe) that so many of the affected parties are sophisticated repeat players with experienced and knowledgeable counsel, you come away with the idea that the only time Brulotte really constrains anybody is when they write an agreement in ignorance of the rule. Now that is a point that makes you think twice about taking the trouble to overrule the decision.

Of course, Marvel also has to have a section defending Brulotte on the merits. The strategy here, which again sidesteps the great bulk of Kimble’s brief, is to defend Brulotte as a matter of patent policy. If we’re talking about patent policy, then all of the literature on antitrust and developments in antitrust policy really is largely irrelevant. Within the realm of patent policy, it is fair to say, it makes a great deal of sense to draw a sharp line at the moment of expiration. Most tellingly, Marvel suggests that patent policy, developing more recently than antitrust policy, has eschewed vague standards like the rule of reason that Kimble advocates, largely because of their unpredictability. Knowing what they know today about the litigation costs associated with the rule of reason, the Justices well might think twice about directly importing that particular tool of antitrust doctrine into the patent domain.

This is one of those cases (much like Commil v. Cisco later in the morning) in which there is little to constrain the Justices’ predilections. The argument will probably tell us a lot more than the extensive quotations in the briefs of the parties about what the Justices think on the topic of rewriting a piece of their own handiwork. If the argument in Halliburton Co. v. Erica P. John Fund last Term (considering whether to overrule Basic Inc v. Levinson) is any guide, it will be spirited.