Looking for a workable rule: Today’s argument in Plain English

Today the Court heard oral arguments in EEOC v. Abercrombie & Fitch Stores, in which the federal government is suing the retail giant for its refusal to hire Samantha Elauf, a Muslim teenager who wore a headscarf.  (I previewed the case in Plain English yesterday.)  After an hour of often spirited discussion, it wasn’t clear that there was a consensus for either side’s proposed rule.  But the government (and therefore Elauf) has reason to be optimistic, as several Justices seemed to coalesce around a rule that would give it much of what it is seeking.  Let’s talk about today’s oral arguments in Plain English.

Arguing on behalf of the federal government, Deputy Solicitor General Ian Gershengorn quickly ran into questions about the EEOC’s position, which would prohibit employers from refusing to hire someone based on her religion or the religion’s practices, if it correctly understands those practices and they can be accommodated – as it was in this case, in which an assistant manager believed that Elauf wore a headscarf because she is a Muslim.

Justice Antonin Scalia was, to put it mildly, dubious about how “straightforward” the government’s test actually is.  He pressed Gershengorn to explain the difference between “knowing” something and “correctly understanding” it; when Gershengorn tried to elaborate, Scalia told him that “that doesn’t make any sense to me.”

And although Justice Anthony Kennedy suggested that there was “substantial force” to the government’s argument that an applicant doesn’t have to take the initiative to mention the religious practice to a would-be employer, he emphasized that the government’s reliance on the word “understand” rather than “know” was “confusing.

Even Justice Elena Kagan – whose vote we would expect the government to need to prevail – expressed some skepticism about how the government’s rule would apply.  If an employer doesn’t have to be certain that a job applicant’s practice derives from her religion, she asked, what level of confidence does it need?  Would it be enough for an employer to be two-thirds certain that a potential conflict with its work rules is the result of the applicant’s religious practices?  What about fifty-percent certainty, she queried?

Gershengorn countered that, if an employer is concerned about whether an applicant’s religious practices might conflict with its rules, it can then “start a dialogue” with the applicant to try to reach a solution that would accommodate the applicant’s religious practices.  But that drew fire from the Chief Justice, who told Gershengorn that such a practice might cause more problems than it solved by requiring the employer to ask the applicant questions about religion that it might not ask someone else.

Arguing on behalf of Abercrombie, Shay Dvoretzsky also faced tough questions about his client’s proposed rule, which would put the burden on the applicant to notify the would-be employer that there could be a conflict between her religious practices and its rules.  Justice Alito pressed Dvoretzsky to concede that the rule was not an absolute one, and that there are instead “at least some circumstances in which the employer” should be responsible for knowing about an applicant’s religious practices “based on what the employer observes.”  But Dvoretzsky refused to bite. 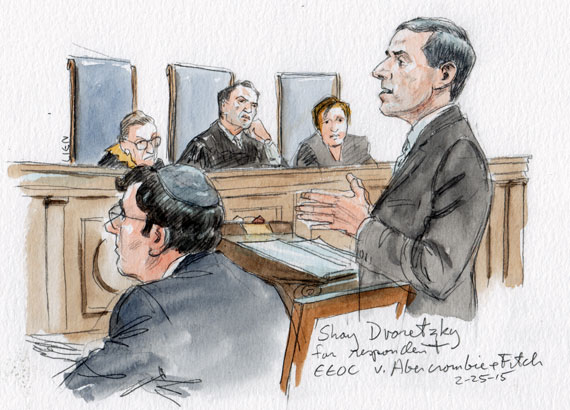 Justice Ruth Bader Ginsburg pointed out that Abercrombie’s rule would only work if the applicant knew that there might be a potential conflict in the first place.  Here, she emphasized, a friend who worked at Abercrombie had in fact told Elauf that her headscarf would not be a problem as long as it wasn’t black.

And Justice Kagan pushed back against Abercrombie’s contention that putting the burden on employers would require them to probe into an applicant’s religious practices.  Given the choice, she asked, between requiring Abercrombie to have an “awkward conversation” about religion with an applicant and having someone not be hired at all because the employer relies on stereotypes about religion, isn’t the “awkward conversation” the better way to go?

With the Justices apparently dissatisfied with both of the options presented to them by the parties, Justice Sonia Sotomayor offered a possible solution that would allow an employer like Abercrombie to inform a job applicant about its work rules without asking probing questions about the applicant’s religion:  if an applicant had a beard, for example, the employer could tell the applicant that its “Look Policy” prohibits beards (thereby notifying him of a possible conflict) and simply ask him whether he can comply with that policy.

Not all Justices were amenable to this proposal:  Chief Justice John Roberts complained that such an approach wouldn’t “cover anything that’s not readily apparent,” and Justice Scalia asked about the scope of such a rule – what if an applicant could comply, but it would make her uncomfortable?

But other Justices – perhaps enough to form a majority – seemed to be on board with the proposed middle ground. Justice Samuel Alito, for example, suggested a similar rule:  an employer could tell an applicant that it has “a policy of ‘no beards’” and ask him whether he has “a problem with that.”  (Although we often think of Justice Alito as supporting the employer in civil rights cases, he was also the author of two of the Court’s most recent decisions in favor of religious liberties.)  And later on Justice Ruth Bader Ginsburg also seemed to throw her support behind such a rule.

Can the middle ground pick up five votes?  We’ll know by late June, and when we do we will be back to report on it in Plain English.