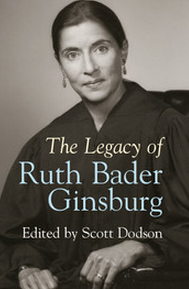 Scott Dodson, the editor of this volume, has brought together an impressive group of law professors, lawyers, historians, and journalists to write about Justice Ruth Bader Ginsburg’s legacy. There are sixteen essays, each devoted to different periods of her life and work, with very little overlap in the coverage, and no real conflict of interpretation. In addition to Dodson’s own essay, the book includes contributions by, among others, Thomas Goldstein, Lani Guinier, Robert Katzmann, Herma Hill Kay, Linda Kerber, Dahlia Lithwick, Neil and Reva Siegel, Nina Totenberg, and Joan Williams.

Legacy opens with chapters on Ginsburg’s career as a law professor and litigator for women’s rights, and continues with two sections on her judicial opinions, the first on rights, the second on governmental structure and procedure. Additionally, there is a section titled “The Jurist” with essays that step back to assess Ginsburg’s work as a whole and her personality, what Dodson calls “temperament.” Of these essays, my favorite was the last one, Dahlia Lithwick’s Fire and Ice: Ruth Bader Ginsburg, the Least Likely Firebrand. Without jargon or rhetoric, Lithwick gives the best account I have read of Ginsburg’s feminism, capturing the paradox of how this cautious, canny, and scholarly lawyer played so large a part in the achievements of a culture-changing women’s movement.

This is the first of what we can expect to be a long list of works about Ruth Ginsburg. Apparently, she will write none of them. Recently when asked about a possible autobiography, she replied: “‘Never. There are two people — Wendy Williams and Mary Hartnett — who are writing a book about me, and it will be very good. I don’t care if I ever see it or how long it takes.’” In the same interview, Justice Ginsburg also referred to a book being written by Jane DeHart, a distinguished historian of women who contributed a blurb to this collection. Another book in the works is a joint biography of Justices Ginsburg and Sandra Day O’Connor by Linda Hirshman (a retired professor of philosophy and law). Earlier this month in The New York Times, the columnist Gail Collins mentioned that Ginsburg “seems to be looking forward to an upcoming ‘Notorious R.B.G.’ book written by Shana Knizhnik, who created the blog of the same name and Irin Carmon of MSNBC.” And there will undoubtedly be others.

Like many of the contributors to this volume, I feel that I have travelled with Ruth Ginsburg on some part of her improbable journey to iconic fame, and I count her as a friend. I first met Ruth in the early seventies when we were each among a minuscule number of feminist women law professors, she at Rutgers and then Columbia, and I at Stanford. In those days, we few all knew each other, either personally or by reputation. None of us would have predicted that someday a volume like this would be dedicated to one of our number. It is thrilling to see.

Herma Hill Kay, another legal feminist pioneer, and currently writing a history of early women law professors, weighs in with an essay entitled Law Professor Extraordinaire. In it, Kay (the recipient of the Association of American Law Schools’ Ruth Bader Ginsburg Lifetime Achievement Award) describes the “stunning” switch in Ginsburg’s scholarship from civil procedure and comparative law to women’s rights. When Ruth dedicated herself to writing about and litigating for gender equality, I wondered whether she hadn’t cost herself a deserved place in the legal establishment’s pantheon of distinction, and I admired her courage.

Many of the essays in the book refer to Ginsburg’s traditionally American life story: raised in Brooklyn, solidly Jewish middle class, attended public schools, and Cornell University on a scholarship. Some things I did not know about her: she was a majorette, twirling a baton at sporting events, and was regarded as very beautiful, “ravishing” according to a law school classmate.

At Cornell she met and shortly afterwards (this was the fifties) married Marty Ginsburg, and followed him to law school at Harvard. The remarkable Ginsburg marriage — Ruth and Marty — is another of the themes that play through this volume. As Nina Totenberg recounts, toward the end of his life Marty, a renowned tax lawyer, told a friend “that the most important thing I’ve done is to enable Ruth to do what she has done.”

Chief Judge Robert Katzmann’s essay gives an account of Marty’s devotion and support during Ruth’s Supreme Court confirmation campaign. He also describes her unexpected and quite wonderful recent fame: “Greeting cards bear her likeness, operas are written about her, T-shirts with her images are popular gifts, Ruth Bader Ginsburg bobbleheads are hot commodities, a fan website records her wisdom.” Marty, who died in June 2010, did not live to see Ruth rock ‘n roll, though I think he would have applauded it.

I recall Marty Ginsburg’s calling me to lend a supportive hand with the effort to secure her confirmations on the D.C. Circuit and the Supreme Court. He rightly assumed that I would do all I could because Ruth and I were on the same team, part of the same great movement for women’s rights, one of the small but ever increasing band of feminist law professors.

Recently, in addition to the popular attention Ginsburg has enjoyed, there has been a rising chorus calling for her to resign, while there is still time to assure a liberal replacement. She has firmly said she will not do it. Ruth Ginsburg’s brilliance, exceptional hard work, and commitment to women’s causes took her to the highest Court in the land, where she always wanted to be. She does not intend to leave while she feels that she still has a contribution to make. I, for one, think she is right.

Barbara Babcock is the Judge John Crown Professor of Law, Emerita, at Stanford Law School. She is one of the pioneers in the study of women in the legal profession. Babcock is the author of Woman Lawyer: The Trials of Clara Foltz (Stanford Press, 2011), a biography of the first woman lawyer in the West, and the founder of the public defender movement.