View from the courtroom: Justice Scalia, a bit late to the stage 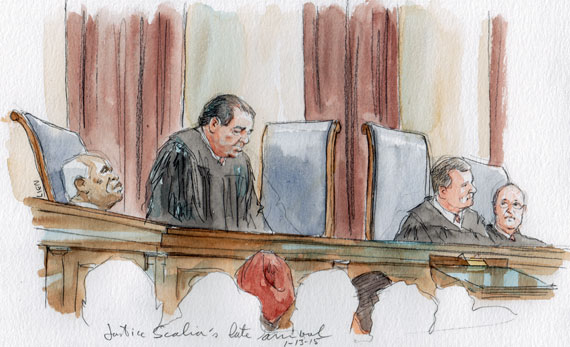 Here’s one more reason members of the U.S. Supreme Court don’t want their arguments televised. Who would want C-SPAN to show your late arrival to work?

When the Court took the bench on Tuesday morning, Chief Justice John G. Roberts, Jr., announced that Justice Antonin Scalia had written two opinions. Justice Scalia’s seat was empty, and without elaborating, Roberts said, “he’s asked that I announce them.”

The Chief Justice proceeded to read Justice Scalia’s “bench statements” in two modestly important cases. In Jesinoski v. Countrywide Home Loans Inc., the Court unanimously ruled in favor of a mortgage borrower in an interpretation of the federal Truth in Lending Act.

In the second, Whitfield v. United States, the Court unanimously affirmed a lower court’s interpretation of a portion of a 1934 federal criminal law which provides that a bank robber forces a person to “accompany” him when he moves that person to go with him for even a short distance. The case involved a fleeing bank robber’s encounter with an seventy-nine-year-old woman, who had a heart attack and died after the robber forced her to move between four and nine feet within her home.

Reading Justice Scalia’s summary, the Chief Justice said “accompany” does not connote movement over “a substantial distance,” as the bank robber had argued. “It was, and still is, perfectly natural to speak of accompanying someone over a short distance—to the dinner table, to the next room, to the stage.”

While many in the courtroom wondered where Justice Scalia was today, reporters in the press room were quickly informed by the Public Information Office, which had communicated with the Justice’s chambers, that he was stuck in traffic and was expected to arrive soon.

Traffic in the Washington area was indeed heavy during Tuesday morning’s commute, perhaps owing in part to a smoky accident on Monday evening on a subway line, resulting in one death and dozens of passengers being sent to hospitals.

It is extremely rare for members of the Court to be late to work on an argument day. The most famous example of the modern era was in 1996, when a blizzard shut down most of official Washington but not the Supreme Court. (The lawyers for the case to be argued were all in town, so then-Chief Justice William H. Rehnquist decreed that the argument would go on. But Justice David H. Souter, the hardy New Hampshire native, set out in his Volkswagen Rabbit, only to get stranded in the snow. He was rescued by the Supreme Court police, and arrived about ten minutes late to the bench.)

Several years back, Justice Scalia was running late during his morning drive to the Court on another argument day. I know this because I was running late that day, too, and his car nearly collided with mine a few blocks from the Court. It turns out, as I realized from a closer look at the intersection in question a little later that day, that the Justice had a green arrow to turn right, where I was turning left from the opposite direction. So if we had collided, I would have been the one in the wrong. (For reasons of discretion, I won’t mention what kind of car the Justice was driving, but it was no clunker.)

Back in the courtroom on Tuesday, new bar members were sworn in, and arguments began in Mach Mining LLC v. Equal Employment Opportunity Commission, a case about whether and to what extent a federal court may enforce the EEOC’s duty under federal law to conciliate employment-discrimination claims before filing suit.

Just after 10:10 a.m., after the argument had been underway for four or five minutes, the center curtains stirred behind the Chief Justice, and Justice Scalia moved a short distance to the stage, or to his seat on the bench (which is often his stage, of course). A few minutes later, an aide brought his silver coffee go-cup and some case materials.

At 10:21, Justice Scalia felt sufficiently up to speed to chime in. “Can I ask something about this,” he said to the lawyer before him. The solicitous tone was uncharacteristic, and reminiscent of the courtly way that now-retired Justice John Paul Stevens would enter an argument before asking a razor-sharp question.

Before too long, with a few sips of his coffee, Justice Scalia was back to himself, interrupting the lawyers to grill them without asking their permission.

[Disclosure: Goldstein & Russell, P.C., whose attorneys contribute to this blog in various capacities, is among the counsel to the petitioner in Mach Mining v. EEOC. The author of this post is not affiliated with the law firm.]