Argument analysis: Search for workable standard of review of the EEOC’s efforts to conciliate

At Tuesday’s oral arguments in Mach Mining, L.L.C. v. Equal Employment Opportunity Commission, the Court considered what standard of review should be accorded to the EEOC’s duty to try to negotiate an end to an employer’s unlawful employment practices before it sues for a judicial remedy. Questioning of both sides reflected the Justices’ quest for a workable standard. The Justices appeared disinclined to agree with the EEOC that its efforts should be insulated from review. But they also seemed unlikely to uphold as searching a review as Mach Mining and other employers seek. 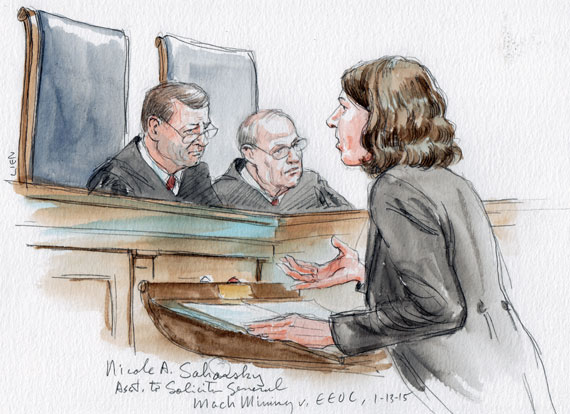 Assistant to the Solicitor General Nicole A. Saharsky for the EEOC (Art Lien)

The question turns on the interpretation of Title VII’s statutory scheme, which provides that the EEOC “shall endeavor to eliminate” alleged unlawful employment practices by “informal methods of conference, conciliation, and persuasion” before filing suit. In this case, the EEOC had found reasonable cause to believe the company had discriminated against the woman whose complaint triggered the case, as well as a class of women who had also unsuccessfully applied for mining-related jobs. The commission had notified Mach Mining of its intention to begin informal conciliation. After a year of unsuccessful discussions, the EEOC notified Mach Mining that it had determined that the conciliation process had failed, and it filed a complaint in the district court. In response to the complaint, Mach Mining asserted an affirmative defense that the EEOC had failed to conciliate in good faith.

The Justices’ questioning of Mach Mining’s lawyer, Thomas C. Goldstein, started with an inquiry about what analytic framework would be the most analogous. Justices Anthony Kennedy and Sonia Sotomayor distinguished the statutory framework here from those that would require deference to administrative determinations, noting that the process of conciliation does not involve a final agency action. Justice Ruth Bader Ginsburg seemed reluctant to treat the scheme like others involving traditional bargaining, suggesting that, because the employer is not obligated to cooperate to do anything, the scheme lacks mutual obligations. Goldstein agreed with Justice Kennedy that Mach Mining was not asking the Court to import the existing law on good faith bargaining in the labor context, or in the context of good faith clauses in contracts. Although Justice Kennedy suggested that “that’s your safest harbor,” he also later warned that such an approach might be “a morass.” Justice Sotomayor observed that the scheme was “unusual enough” to have created a “huge” split among the circuit courts, with no consistency among more than two of the court of appeals decisions. Both she and Justice Ginsburg expressed concern that Mach Mining sought to turn something Congress intended to be highly informal into a formal, regulated, proceeding. 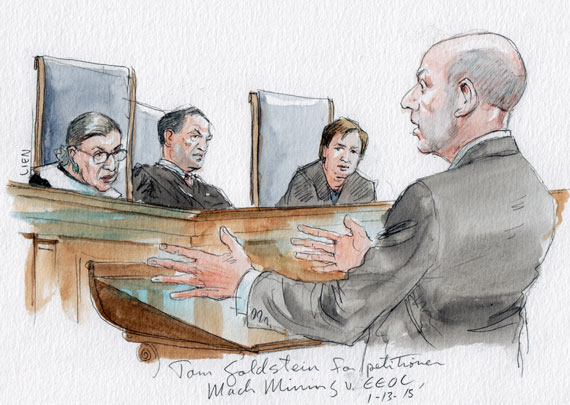 Several Justices seemed reluctant to uphold searching review given Congress’s broad grant of authority to the EEOC. Justice Kennedy seemed to agree with the Seventh Circuit’s conclusion that “it’s hard to imagine more discretionary language” than that used here.  Justice Kagan observed that the statute makes “entirely clear” that the EEOC has the prerogative to decide what kind of offer by the employer is acceptable. Goldstein urged the Court to review the procedure, rather than the substance, of the EEOC’s approach to conciliation.

Justice Ginsburg emphasized the facts in this case. She noted that there was lots of evidence here of sex discrimination, including allegations of the employer’s history of refusing to hire women and assertions that it had built a new facility that lacked a women’s bathroom and had hired people recommended to them by current employees, who were all male and recommended only men. Goldstein sought to minimize that critique by clarifying that the allegations centered around hiring women for work in the mine; presumably the company hired women elsewhere in its facilities. Nevertheless, the question before the Court concerns the process of conciliation, not the merits of the underlying claim.

Other questions focused on the incentives that the conciliation process creates for both parties’ strategic choices. Justice Antonin Scalia was concerned that the complainant was not a part of the conciliation process. Accordingly, even if the complaining party would accept a settlement, the EEOC still retained the discretion to decline to settle and proceed to litigation. Goldstein emphasized employers’ concerns that the EEOC has enormous incentive to pick out the cases it wants to be high profile, to decline to conciliate, and instead to commence litigation, to send a message the employers. By contrast, Assistant to the Solicitor General Nicole A. Saharsky, arguing for the EEOC, highlighted the incentives for the agency to settle, given resource constraints that limit litigation, and reports and reviews by the president and congressional committees. However, Justice Scalia seemed inclined to agree with the employers’ view that the EEOC had “real incentives” to have conciliation fail.

A segment of the argument focused on Title VII’s confidentiality provision. Justice Kagan seemed to view the confidentiality provision as supporting broad deference to the EEOC, since the statute prohibits anything said or done as part of the informal conciliation process from being used as evidence in “subsequent proceedings.” She was concerned that, under Mach Mining’s view, everything that was part of the informal proceedings could be brought into the case.

In addressing the heart of the case, most of the Justices seemed to agree with Justice Breyer, who stated that “there should be judicial review” but that “the issue is how much.” He queried whether the standard articulated in a recent case involving challenges to IRS subpoenas offered a workable analogy. Under that decision, government actions could be challenged in unusual cases in which there was specific evidence of bad faith. Although Goldstein agreed that minimum good faith provides a good starting point, he urged the Court to go further and require a showing of some “easy, simple” identifiable steps.

The Justices looked to Saharsky for assistance in articulating a workable, but limited, standard of review. They seemed frustrated with the EEOC’s hard-line position that the only thing the Court can review is whether conciliation was offered and whether it ended. Justice Sotomayor pressed Saharsky to explain, for example, how a court should review a situation in which the EEOC sends a letter and the employer responds, but the EEOC refuses to talk, hangs up, and subsequently sends a letter which says that conciliation failed. Chief Justice John Roberts followed with a similar hypothetical in which the EEOC sends a letter informing the employer that a representative will be in touch to begin the conciliation process, but the employer indicates that no one ever contacted it. The Chief Justice told Saharsky: “I am very troubled by the idea that the government can do something and we can’t even look at whether they’ve complied with the law.” Justice Kennedy similarly expressed concern that he could not find any other context in which a court “has essentially declined to review a statutory precondition” to suit. Justice Scalia seemed to favor specific inquiries, for example, into whether the EEOC made an offer or not. But Saharsky objected that such inquiries would lead courts into costly and unproductive collateral litigation.

Justices Breyer, Kennedy, and Sotomayor repeatedly pressed Saharsky for a standard which recognized that there is review while acknowledging the broad discretion given to the EEOC. As Justice Breyer said, “I’m asking you for help how to write that.” Justice Sotomayor similarly urged Saharsky to “[g]ive us a way to write it that gives you the least . . . intrusion but more than what you want to do.” The Justices expressed frustration with the government’s failure to do so. As Justice Kennedy said: “you have not articulated a minimum rule.” Instead, he observed that, “[a]ll we hear is no review, period, good-bye.”

Saharsky resisted agreeing to any standard other than the EEOC’s position that its actions should be afforded discretion. A number of Justices offered suggestions. Justice Sotomayor seemed to agree with Justice Breyer that the case setting the standard for challenges to IRS subpoenas provides a useful template. She suggested that the employer could be required to articulate circumstances showing that the EEOC had acted in bad faith – which, she noted, it had not done here. Justice Kagan offered that the EEOC could be required to produce an affidavit indicating that “we told them what we were objecting to and we talked and it didn’t work.” Justice Scalia suggested that the Court could decide that the process is judicially reviewable and remand for the agency to issue rules. Toward the end of the argument, Saharsky seemed amenable to some of the “minimal requirements” that Justices Kagan and Breyer had laid out. But she reiterated her concern that the courts of appeals had adopted what they termed “minimal,” “good faith” review that instead devolved into really searching review” that “can’t be justified on the statute’s text.”

On rebuttal, Goldstein urged the Court to adopt a more robust review than what the Justices seemed to contemplate in their questioning of Saharsky. He enumerated a number of inquiries that courts could undertake in determining the adequacy of the conciliation efforts, an approach Justice Kagan viewed as “intrusive.” The parties’ respective positions suggest that the Justices will be left to come up with their own middle ground. Perhaps that result, in which the Court would, in a sense, conciliate the positions presented by counsel, is fitting, given the nature of the case.

[Disclosure: Goldstein & Russell, P.C., whose attorneys contribute to this blog in various capacities, is among the counsel to the petitioner in this case.]