Argument analysis: “As compared to what?”

When the going gets tough as the Supreme Court tries to sort out a legal question, it is a natural tendency to think that knowing more about the facts would help.  That’s exactly where the Justices found themselves on Wednesday, as they explored just how to judge whether a workplace policy treats pregnant workers unfairly.  The basic factual issue was: unfair, as compared to what?

In order to decide the case of Young v. United Parcel Service, the Court has to figure out what Congress had in mind in 1978 when it passed a law outlawing discrimination in the workplace against pregnant employees.  The Justices seemed deeply uncertain about that legal question, so they turned mainly toward exploring the facts of how the package-delivery company treats its workers whose physical condition means that they can’t do the normal tasks of their jobs — like heavy lifting. 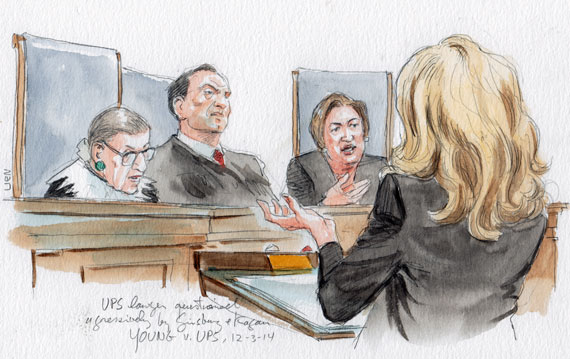 One part of the 1978 law (the Pregnancy Discrimination Act) says that pregnant workers are entitled to the same treatment in the workplace as non-pregnant employees who are “similar in their ability or inability to work.”  The Justices probed deeply into what that section’s words — and punctuation — convey, even to the point of trying to sort out whether a semi-colon made a difference.  There did not appear to be a consensus on the meaning.

But, led by Justices Stephen G. Breyer and Elena Kagan, the Court tried to get at the facts:  which UPS employees get assigned to light duty to accommodate their condition, how large a part of the company payroll is entitled to that treatment, are there any other conditions but pregnancy that put a worker outside that group, and how does UPS justify the differences?

Breyer appeared to be convinced that there needs to be a further exploration, probably in lower courts, about how to spell out those comparisons.  The law, he noted, seeks comparisons with other workers, but, he asked: “Which others?” He had some specific legal advice about how the lawyers for the former UPS driver, Peggy Young, should have pursued her case, and may yet be able to do.

Kagan, who kept talking about how vital “the comparators” are, used some extended and often quite aggressive questioning of UPS’s lawyer to find out whether the policy is, in fact, neutral toward pregnancy, as UPS claims.

Typically, the Justices attempted to use hypotheticals as they dug into the specifics of how a company might favor — or disfavor — some of its employees: extra pay for driving a hazardous delivery route, a limo ride to work for the upper echelon, a worker who falls off an all-terrain vehicle on a weekend away from work.   Each example was a factual inquiry and, supposedly, the answer to each would clarify when discrimination exists, or does not exist.

At the lectern, Young’s lawyer, University of Michigan law professor Samuel R. Bagenstos, kept insisting that Congress meant in 1978 not only to outlaw blatant discrimination against pregnant workers, but also to go beyond that and assure them equal treatment when they are not up to their normal jobs.  But his argument kept drawing the Court back to the two, separate clauses of the law, and that was where the Justices repeatedly found themselves in most uncertain territory. 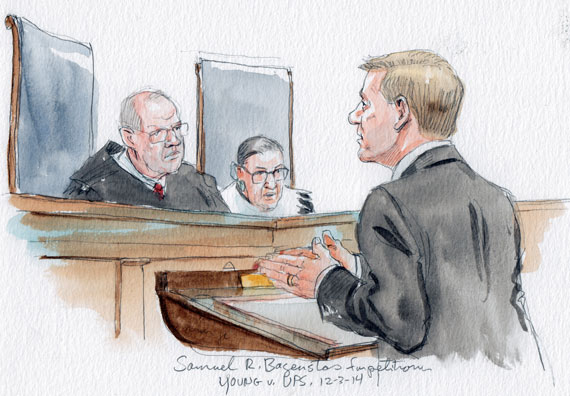 Sam Bagenstos for the petitioner

Backing Young’s claim, U.S. Solicitor General Donald B. Verrilli, Jr., tried to simplify the meaning of the law, suggesting that it actually did not impose a very heavy obligation on employers to accommodate their female workers.  But he was challenged on whether the Court should defer to the government’s current view, because the Justice Department used to defend the law exactly as it is explained by UPS in this case.

UPS’s lawyer, New York attorney Caitlin J. Halligan, did what she could to try to make it appear that the second clause of the law does not add much to the first clause’s ban on pregnancy discrimination, but she had to spend much of her time jousting with Justice Kagan, who said that UPS’s interpretation essentially deprived the equal-treatment mandate of any real meaning. 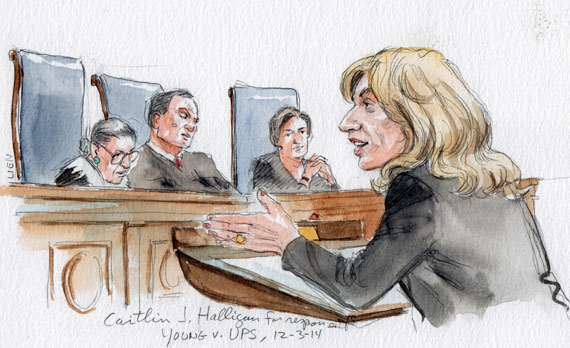 Halligan did not appear to be especially successful, in defending UPS’s light-duty policy for those temporarily unable to do their full jobs, in arguing that it simply reflected a long-established practice in industry of accommodating those hurt on the job and not those whose inability to perform came from off-the-job conduct.

Few of the Justices seemed convinced that that was the only comparison that counted in sorting out what Congress meant in a law that, perhaps surprisingly, has a lot more ambiguity in it than was commonly assumed.