We often think of the Supreme Court as the arbiter of distinctly national disputes – for example, whether the Affordable Care Act can require all of us to obtain health insurance or pay a penalty, or whether public universities can consider race as one factor in their admissions process.  But yesterday the Court waded into a dispute that is playing out on a global stage:  whether a U.S. citizen born in Jerusalem can choose to have his place of birth listed as “Israel” on his passport.  The answer, according to the U.S. government, could have a potentially explosive impact on the U.S.’s role in the Middle East peace process, and possibly even on the peace process itself.  Let’s talk about Zivotofsky v. Kerry and yesterday’s argument in Plain English. 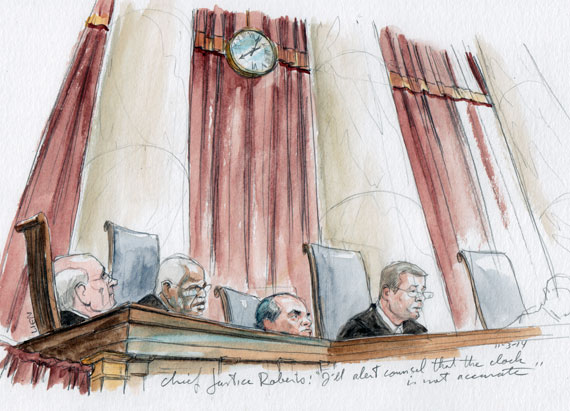 Since 1948, the United States has declined to recognize any country as having sovereignty over the holy city of Jerusalem.  But in 2002, Congress passed a law that instructed the Secretary of State, upon request, to list the birthplace of a U.S. citizen born in Jerusalem as “Israel” on his passport.  President George W. Bush signed the law, but at the same time he issued a statement – known as a “signing statement” – in which he protested that the law “interferes with the President’s constitutional authority to conduct the Nation’s foreign affairs and to supervise the . . . executive branch.”

The child at the heart of today’s case, Menachem Zivotofsky, was born in Jerusalem in 2002 to U.S.-citizen parents.  When his parents applied for a passport for him, they asked – consistent with the then-new law — to have his place of birth be designated as “Israel” on his passport.  When the State Department refused, the family brought this lawsuit, which has already been to the Supreme Court once before.  Two years ago, the Justices decided that the lawsuit could continue; it was not, they concluded, the kind of “political question” that courts should leave to the president and Congress.

The case went back to the lower court, which ruled in the government’s favor.  It agreed with the government that only the president has the power to recognize foreign countries.  And the law ran afoul of that power, it concluded, because it tried to change the government’s long-standing policy of not recognizing any country as having sovereignty over Jerusalem.

Zivotofsky asked the Supreme Court to weigh in, and it agreed to do so earlier this year.  At yesterday’s oral argument, lawyers for the two sides painted very different pictures of the potential effects of the law.  Representing the United States, Solicitor General Don Verrilli told the Justices that the “question of the status of Jerusalem is the most vexing and volatile and difficult diplomatic issue that this nation has faced for decades.”  He cautioned the Court that upholding the statute would undermine the president’s credibility in the Middle East peace process, and he reminded the Justices that the passage of the law had prompted “mass demonstrations in Jerusalem, thousands of people in the streets, some turning violent.”

Alyza Lewin, representing Zivotofsky, downplayed the government’s warnings about the possibly dire international consequences of the law, dismissing them as “grossly exaggerated.”  Eventually, she suggested, listing Israel as the birthplace on the passports of U.S. citizens born in Jerusalem would “become a non-issue.”  And Congress has the power to require the State Department to do so, she maintained, pursuant to its power to regulate passports.  That exercise of the “passport power” here does not infringe on the president’s power to recognize foreign countries, she contended, because a passport simply identifies someone as a U.S. citizen for purposes of overseas travel.  Identifying Menachem Zivotofsky on his passport as having been born in “Israel” does not, she argued, amount to a formal recognition by the U.S. government of Israel’s sovereignty over Jerusalem.

Lewin’s argument drew criticism from the Court’s more liberal members.  Justice Ruth Bader Ginsburg countered that the whole purpose of the law was to declare that Jerusalem is the capital of Israel.  Justice Elena Kagan echoed that question later in the oral argument, asking Lewin how to characterize the statute if it isn’t a recognition statute.  Lewin’s response — that the statute was “created to give individuals the right to self-identify” as someone born in Israel – prompted Kagan to label it “a very selective vanity plate law.”  Justice Sonia Sotomayor also appeared skeptical of Lewin’s argument, describing the law as an effort by Congress to direct the Secretary of State to say something that isn’t true:  “that someone born in Jerusalem is actually born in Israel.”

During his thirty minutes of argument time, Verrilli repeatedly emphasized that the fundamental problem with the law is that – in conflict with the president’s exclusive power to recognize foreign countries — it purports to order the president to issue “diplomatic communications” (passports) that contradict the official policy of the U.S. on Jerusalem.  But several of the Court’s more conservative Justices were clearly unconvinced.  Justice Samuel Alito questioned whether the law really would make much of a difference.  After all, he observed, the United States has already recognized that Israel has control over Jerusalem in other ways – for example, the Israeli government issued a birth certificate to Zivotofsky, which the U.S. government accepted as part of the documentation needed to get a passport.  Justice Antonin Scalia did not mince words, telling Verrilli that, if the law falls within Congress’s power to regulate passports, “what difference does it make whether it antagonizes foreign countries?”  And Chief Justice John Roberts asked Verrilli why, if recording Zivotofsky’s place of birth as Israel were really such a problem, President George W. Bush signed the law at all.

Justice Anthony Kennedy, who often proves to be the deciding vote in closely divided cases, could play that role again here, and he was harder to read.  On the one hand, he suggested to Lewin that, if the Court were to defer to the government’s contention that listing “Israel” as the birthplace of U.S. citizens born in Jerusalem amounted to recognition of Jerusalem as the capital of Israel, the government’s position would trump the law.  On the other hand, he asked Verrilli why the State Department couldn’t comply with the law and list “Israel” as the birthplace of U.S. citizens like Zivotofsky, but at the same time put a disclaimer inside the passport to make clear that the designation did not reflect the position of the State Department or “an indication that Israel . . . had jurisdiction over Jerusalem.”

After an hour of oral argument, the case appeared to be a close one.  It ended on a somber note, with Justice Kagan noting that “history suggests that everything is a big deal with respect to the status of Jerusalem.  And right now,” she continued, “Jerusalem is a tinderbox because of issues about the status of and access to a particularly holy site there.  And so . . . everything matters, doesn’t it?”  Whether Kagan’s words will ultimately sway at least four other Justices, and the extent to which its ruling will ultimately matter, remains to be seen.