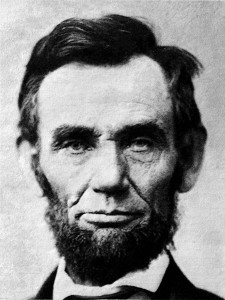 “My topic this evening, President Lincoln, the Supreme Court, and the Civil War, is pretty broad,” Morel began by way of explaining that he would not be discussing some of the old chestnuts traditionally encompassed by that category, such as Ex parte Merryman, and Lincoln’s suspension of habeas corpus, or the Prize Cases, and his blockade of the Southern ports. Instead, Morel concentrated on Lincoln’s sense of justice, particularly as reflected in what Morel considers to be Lincoln’s greatest speech (“It’s not Gettysburg!”): his second inaugural address.

Before getting to the second inaugural address, and the end of the war, Morel first discussed two earlier, but telling, events: Lincoln’s approach to filling vacancies on the Supreme Court, and his decision to issue the Emancipation Proclamation.

When Lincoln arrived in the White House, there was already one vacancy on the Court (left by Justice John McLean). A month after he took office, a second vacancy was created by the death of Justice Peter Vivian Daniel of Virginia. A third seat on the bench became available when Justice John Archibald Campbell, of Alabama, resigned from the Court following the Confederate attack on Fort Sumter and Lincoln’s subsequent proclamation of a state of rebellion. (Soon thereafter, Campbell became Jefferson Davis’s Assistant Secretary of War.)

Unlike today, Morel explained, geography was a particularly salient factor when selecting Justices; when a seat became vacant, a jurist from the same region as the outgoing Justice was generally appointed as a replacement, because of the duties associated with riding circuit. However, because the war was already underway, geography was a delicate matter.

Rather than filling all three seats with Northern jurists, Lincoln asked Congress to reorganize the federal judiciary by reshuffling the circuits, which they did with the Judiciary Act of 1862. Lincoln did this, Morel explained, “with an eye towards the South’s eventual return to the Union … they’d need judges.”

Morel continued on this theme of Lincoln’s focus on unification by explaining that although Lincoln was opposed to slavery, he was no abolitionist, as demonstrated by the fact that in his first inaugural address, he said that he had no intention of changing the “domestic institutions of service” in any of the states. The Emancipation Proclamation, Morel said, was about political authority, not morality, and he quoted from Lerone Bennett Jr.’s book on Lincoln, Forced Into Glory:

Notably, the Emancipation Proclamation excluded the border states – Missouri, Kentucky, Maryland, and Delaware – because they were not in rebellion. “It was about military might,” Morel concluded.

At the time he issued the Proclamation, Lincoln’s focus was on saving the Union, not ending slavery. However, Morel explained, Lincoln did believe that the Framers did not intend for slavery to last forever, and Lincoln was concerned that “the spread of slavery was at least to be prevented.”

The concern for at least containing slavery, according to Morel, explains Lincoln’s rejection of Senator Stephen Douglas’s proposal that the question of slavery be settled though popular sovereignty. Lincoln called this the “don’t care policy.” According to Morel, Lincoln believed the proposal was insidious because all that was required in order to engrain slavery into American culture was to teach non-slave-owning whites to not care what happened to blacks. At this point, Lincoln’s sense of justice comes into sharper relief.

For Lincoln, Morel told his audience, Americans were God’s “Almost Chosen” people; while they were not chosen in the religious sense, they were in the political sense. Lincoln saw himself as a vehicle for God’s will and he struggled to understand the dimensions of God’s purpose behind the war, which he had initially believed to be limited to protecting constitutional government. Lincoln wrote to himself, “God wills this contest and wills that it shall not end yet. He could have saved or destroyed the Union without the contest. Yet the contest goes on.”

According to Morel, as the war dragged on Lincoln began to believe that God’s plan for his “almost chosen” people did not stop at constitutional government, but was bigger, and included freeing the slaves. Where emancipation began as a means, a war measure, it shifted with time to became an end. To this effect, Morel quoted from Lincoln’s letter to Sen. James Conkling concerning the plight of black soldiers who fought for the Union:

Why should they do any thing for us, if we will do nothing for them? If they stake their lives for us, they must be prompted by the strongest motive–even the promise of freedom. And the promise being made, must be kept.

At the end of the war, Lincoln faced “the problem of a defeated but defiant South.” Although the war had been long, Morel mused, slavery had been around much longer, and if slavery had been the cause of the war, it would also be the greatest obstacle to reconstruction. Lincoln’s rejection of triumphalism in his second inaugural address is therefore a compelling illustration of what Lincoln had come to understand as justice, which was that the war was God’s punishment – to the North and South equally – for two centuries of slavery and for building American prosperity through the unrequited toil of the slaves. “Lincoln does not say that he knows God affected his will through the war,” Morel said, “he simply offers it as the best explanation for a war no one wanted, and a result no one seriously expected.”

Importantly, Morel concluded, the speech reflected what Lincoln saw as God’s mercy. A four-year war, though costly, was a lenient punishment compared to two hundred years of slavery. Lincoln’s message to the fragile Union was to emulate this mercy in the process of reconstruction. Because men are “not flattered to be shown a difference in purpose between themselves and God,” Lincoln did not believe that it would be an “immediately popular” speech, but he did think it would stand the test of time.

The Supreme Court Historical Society’s 2015 Leon Silverman Series will focus on the reconstruction. Its next event is on “The Anti-Slavery Constitution of Salmon P. Chase.”

Posted in Supreme Court history, Everything Else