At 10 a.m Wednesday, the Supreme Court will hold one hour of argument in Yates v. United States, testing the sweep — or the narrowness — of a federal law that seeks to protect evidence of crime from being destroyed.  Arguing for a Florida fisherman who went to jail after a conviction under that law will be John L. Badalamenti, an assistant federal public defender in Tampa; Roman Martinez, an assistant to the U.S. Solicitor General, will argue on behalf of the federal government.  Each advocate will have thirty minutes of time. 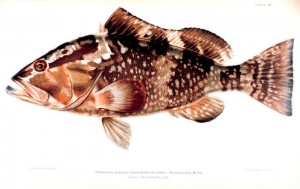 It is an ancient principle of the criminal law that, to commit a crime, an individual must intend to do so.  But it is also a long-standing rule that ignorance of the law is no excuse for violating it.  The trouble, in the field of federal laws making crimes, is that there are so many that even the Library of Congress did not have the staff to compile all of them, when asked to do so.   What happens when one violates a law without knowing it was a law?

The Supreme Court on Wednesday faces this question: is a fish a “tangible object”?   If it is, legally speaking, John L. Yates of Florida was validly convicted of violating a law that Congress passed in 2002, in the wake of the corporate scandal at Enron Corp., when executives allegedly destroyed documents to hide evidence.  Yates was convicted of throwing overboard fish that his boat crew had caught illegally.

Yates was the captain of the Miss Katie, a commercial fishing vessel operating out of Cortez, Florida, in August 2007, when a state conservation officer boarded the boat to make an inspection.  Working as a deputy for the federal agency that regulates fishery operations, the officer noticed a batch of red grouper that he thought were too small to meet the legal limit.  He found seventy-two grouper that were under the twenty-inch minimum.

The offending fish were put into a wooden crate, and the officer told Yates and his crew to leave them there.  He said they would be taken by federal agents once Miss Katie had returned to port.  Later, federal prosecutors would claim that Yates told his crew to toss the grouper overboard, and ordered his crew to replace them with legal-sized grouper.

Met at the dock by a federal agent, Yates allegedly said that the fish were still in the crate that the conservation officer had loaded.   The officer was called back, and measured the fish in the crate; he said they were not the same ones.   A crew member told agents that he had thrown the fish overboard at Yates’s direction.

Yates was convicted of one count of disposing of undersized fish to prevent federal agencies from enforcing the law, and one count of destroying the undersized fish to influence a federal investigation.  He was sentenced to (and served) thirty days in jail, and he has since told news organizations that his conviction led to his being denied captain’s status, so that he has had to get odd jobs on others’ boats.

As his case moved up through lower courts and then on to the Supreme Court, the only part of his conviction at issue is the one for destroying undersized grouper to influence a federal investigation.  Yates had made an unsuccessful challenge to that at his trial, and in his appeal.

The law at issue is part of a federal law known as the Sarbanes-Oxley Act, the law passed to deal with problems that emerged in the Enron and other corporate scandals.  That law makes it a crime to “destroy, mutilate, conceal, or cover up any record, document, or tangible object” with the intent to influence or obstruct a federal investigation under “any matter within the jurisdiction” of any federal agency.

In upholding Yates’s conviction under that provision, the U.S. Court of Appeals for the Eleventh Circuit rejected his lawyers’ argument that the law was aimed solely at a “document offense.”  The Eleventh Circuit said that, since the specific law did not define its terms, they were to be given their ordinary or natural meaning, and under that reading, a fish qualifies as a “tangible object.”

That is the ruling the Supreme Court agreed to review, last April, declining to also review a separate claim that Yates had made about exclusion by the trial judge of an expert witness his lawyers had wanted to call to the stand.

His petition was supported by the National Association of Criminal Defense Lawyers, urging the Court to hear the case and to act against the “over-criminalization” of conduct by expansive interpretations of federal laws by prosecutors.  The same argument was made by another advocacy group, Cause of Action.

John Yates’s merits brief opens with a bit of advocacy on its opening page presenting the question: it refers to the statute’s provision as an “anti-shredding” ban and modifies the question from the opening petition to suggest that the issue is whether the phrase “tangible object” refers to “a thing used to preserve information, such as a computer, server, or similar storage device.”   And the brief repeats that formulation in the opening paragraph summarizing the arguments.

Normally, a merits brief simply recites the question as originally presented, but Yates’s attorney took a measure of liberty in recasting it to fit the argument that would follow.  The Justice Department, in response, did not object; it repeated the modified question as Yates’s filing put it.

Yates’s filing conceded that the usual way to read an undefined phrase in a statute is to give it “its ordinary or natural meaning in everyday usage.”  But it argued that discerning that meaning “depends on the context in which the phrase is used.”

That led into a discussion of the surrounding text of the law, and its reference to “record” and “document.”  Those terms,. the brief said, “share a common meaning in everyday usage having to do with preserving information . . . such as a computer, server, or similar storage device.”  Moreover, the brief pointed out, the statute at an earlier point has a reference to “making a false entry in.”

What Congress was doing, in passing the Sarbanes-Oxley Act provision at issue, Yates’s brief said, was giving its “tacit approval” to a U.S. Sentencing Commission manual interpreting a similar phrase as referring to “things that preserve or store information.”

The brief also recounted the history of the Enron scandal, and noted that — at the time of those incidents — federal laws against obstruction of justice did not make it a crime to destroy documents before a federal investigation had actually begun.  Those laws were thus deemed by Congress to be inadequate to deal with the purging of records about Enron executives’ misdeeds when those corporate officers thought an investigation was about to begin.

The Justice Department’s brief on the merits, supporting Yates’s conviction on the specific provision at issue, is a combination of heavy reliance on plain meaning and on the history of congressional passage of a series of criminal laws that refer to protection of a “thing” or a “physical object” as evidence that must be preserved.

Because “tangible object” is unambiguous, the government contended, it surely must be understood as referring to “all types of physical evidence.”  That is what is found in dictionary definitions of such terms, it added.  The specific part of the Sarbanes-Oxley law, the brief went on, “is a straightforward ban on destroying evidence,” and Congress indicated its meaning by placing it in a broader Title 18 dealing with “Obstruction of Justice.”

The formulation that Congress chose, according to the government, is borrowed from the Model Penal Code and other sources that for decades had referred to the protection of physical evidence, including all kinds of such evidence.  Congress, the brief added, used similar language in the federal law making it a crime to tamper with a witness as part of an effort to preserve a “record, document, or other object” in an official proceeding.

That language, the government summed up, “has always been understood to cover all physical evidence.”  In enacting Sarbanes-Oxley, it said, the history of the legislative process demonstrates that Congress was seeking to “close loopholes in the existing destruction-of-evidence regime.”

Finally, the brief contended, Yates’s reliance on surrounding terms in the law cannot overcome the “plain meaning” of the phrase “tangible object.”

Yates’ position in the case is supporting by nine briefs by amici, ranging from conservative legal advocacy groups to fishermen’s groups, criminal law professors, criminal defense lawyers, and former Rep. Michael G. Oxley of Ohio, whose name is on the legislation at issue.   The former congressman argued against “overly broad interpretations” of the Act that would “threaten to undermine the Act’s reforms by imposing undue burdens on businesses and individuals, upsetting the careful balance struck by Congress.”  The government’s reading of the law, his brief said, is just such an excessively broad interpretation, and he, too, referred to the provision as an “anti-shredding” measure focusing on “records.”

No amicus briefs were filed on the government’s side.