It was quite difficult on Monday to remember that the Supreme Court has serious doubts about its own competence in the field of foreign relations.  Justice after Justice, sort of playing “diplomat for a day,” had suggestions on how the federal government might try to avoid what it considers would be a serious embarrassment in Mideast policy.

The most intriguing, as the Court heard the case of Zivotofsky v. Kerry, came from Justice Anthony M. Kennedy who — once again — might well hold the deciding vote on the outcome of a major  constitutional clash between Congress and the presidency.  A simple official disclaimer of what message a passport does not convey might be the answer, Kennedy suggested. 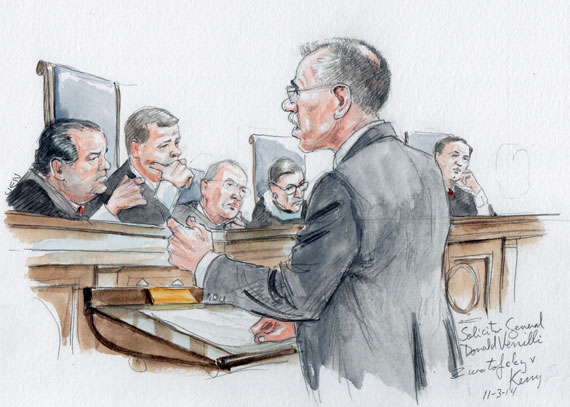 All of the members of the Court (except Justice Clarence Thomas, who usually says nothing in oral argument) were energetically engaged in exploring the question of whether Congress acted unconstitutionally a decade ago in ordering the State Department to let U.S. citizens born in Jerusalem list Israel as their place of birth on their U.S. passports, if that was their desire

The two presidents who have been in the White House since that law was passed — George W. Bush and Barack Obama — have refused to enforce that law, regarding it as a constitutional affront to presidential diplomatic power and as a serious threat to the U.S. government’s credibility as a neutral broker between the hostile factions in the Mideast conflict between Israel and Palestine.

Those presidents and their State Departments believe that they must do everything they can not to tip off those in the region that the United States government is now siding with Israel’s claim to sovereignty over Jerusalem, instead of remaining neutral.  And that, they say, includes not issuing passports to citizens born in Jerusalem that say they were born in Israel.  U.S. Solicitor General Donald B. Verrilli, Jr., used soaring rhetoric to try to make that point on Monday, repeatedly describing a passport as a form of “diplomatic communication.”

While several members of the Court seemed strongly inclined to rule that way, several other members were skeptical in a variety of ways, and did not hesitate to question that what U.S.-issued passports say may really not say anything about recognizing Israel’s claim, or that any potentially negative diplomatic effect of passport messages could be offset.

Justice Kennedy was the first to ask a question, moving in within a minute or so after Washington attorney Alyza Lewin began her argument in favor of allowing a twelve-year-old boy list Israel as his place of birth on his U.S. passport (he is a citizen) because he was born in Jerusalem. 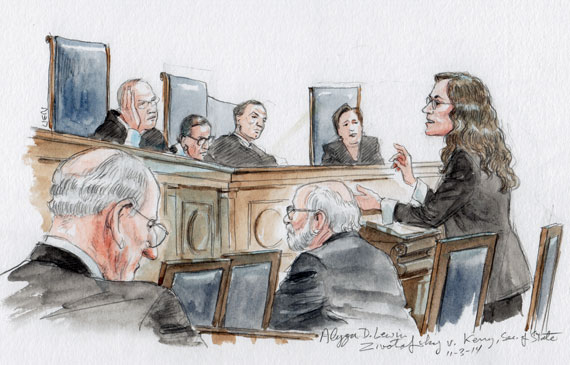 After Lewin had opened with the argument that granting the boy’s wish would not “announce formal recognition of that location’s sovereign status,” Kennedy wondered if that could be made explicit in a public declaration by the president and secretary of State.  Could they say, in issuing a passport, he asked, that noting Israel as the place of birth “is not an acknowledgment that Jerusalem” is within Israel’s sovereign claim?

Lewin readily agreed.  That exchange caused Justice Elena Kagan (who would emerge as a strong defender of presidential prerogative) to wonder if Congress had the power to order the government to do just the contrary — that is, not make any such disclaimer on a passport.  Lewin agreed that the lawmakers could do that, because that, too, would not a grant of recognition to Jerusalem as part of Israel.

Kagan, somewhat dismissively, referred to the law Congress passed in 2002 to try to provide official recognition for Jerusalem as part of Israel, as “a very selective ‘vanity plate’ law.”

It soon became clear that, along with Kagan, Justices Stephen G. Breyer, Ruth Bader Ginsburg, and Sonia Sotomayor were leaning noticeably (with Breyer most definitely) in favor of the executive branch’s power to decide the question, but that those four might not be able to easily garner a fifth vote to make a majority.

Clearly on the other side was Justice Antonin Scalia, who basically suggested that the Court need not pay any attention to what other countries thought the U.S. was saying by what it put on U.S. passports.   He made significant efforts to keep Lewin from straying from her basic defense of Congress’s power to dictate passport policy, even if that directly contradicts what the State Department prefers.  Scalia said that Lewin should be arguing that she “couldn’t care less” what other countries thought (which, of course, would be a rather brusque way of carrying on diplomacy).

Justice Samuel A. Alito, Jr., sought to make the point that neutrality in diplomacy was not an either-or proposition, suggesting that the U.S. — despite its official neutrality on Jerusalem’s status — accepts as official some actions that the government of Israel does.  He noted that the boy involved in this case did get a birth certificate from the government of Israel after his birth in Jerusalem, and the U.S. must have recognized that as authentic when it gave him a passport.

Lewin was buffeted back and forth between the two emerging tendencies on the bench, and held steadily to her argument that the passport place-of-birth issue was not a significant problem for U.S. diplomacy, saying the government’s fears about this were “greatly exaggerated.”   Kennedy tried to help her out with an easy question about why the government’s view should not trump hers; she handled it neatly, saying the conflict in claims to power was the way “separation of powers works” under the Constitution.

Chief Justice John G. Roberts, Jr., mostly stayed out of the argument until the Solicitor General took the lectern to defend the neutrality policy.   Roberts then posed a series of sharp questions, testing whether the policy had been followed consistently and questioning why the government had “made such a big deal out of” the impact on diplomacy of the 2002 law.

He implied a deep inconsistency in President Bush’s having signed that measure into law even while issuing a signing statement condemning its effect on diplomacy.  The government itself, the Chief Justice said, was partly responsible for the “big deal” now surrounding that statute.  That, he said, “goes to the credibility” of the government in expressing such strong fears about how other nations might read enforcement of the law.

Verrilli sought to persuade the Court that it could decide the case without having to rule on the very broad question of which branch of government has the power, under the Constitution, to decide what other nations to officially recognize.   All that the Court need decide in this case, the Solicitor General said, was that Congress “cannot use its power regarding passports to order the executive branch to issue a diplomatic communication that contradicts its policy and undermines its credibility.”

Justice Scalia tried to counter even that argument, insisting flatly that what a passport says about the holder’s place of birth “is not a communication.”  Verrilli objected, saying that requiring the president to issue thousands of passports that identified Israel as the place of birth would mean thousands of times of contradiction of official neutrality.

Trying to remind the Court of the sensitivity the government sees in this case, the Solicitor General said that the status of Jerusalem was “the most vexing and volatile diplomatic issue this nation has faced” as it tried to work for peace in the Mideast.  Other nations, he said, “scrutinize every word that comes out of the U.S. government,” and the “serious adverse effects” of the 2002 law would be to “question whether we can continue to be trusted” to be neutral.

He rejected Justice Alito’s attempt to suggest that the only problem with upholding the 2002 law is that some other nations would “misunderstand” what U.S. policy was.

In the end of his argument, though, Verrilli suggested that, if the Court were to uphold the law, the government would do what it could to enforce it, but at the same time take every step it could to try to mitigate the potential effect in the Middle East.  The remark seemed to indicate that the Solicitor General had sensed that he may not have made his case.