A Supreme Court argument is usually only an hour long, and yet such a session can start slowly and then build toward a clarity that is as defining as a symphonic crescendo.  A standard dictionary defines crescendo as “the highest or loudest point of something that increases gradually.”  That would be a perfect description of the argument Wednesday in Yates v. United States, and of Justice Antonin Scalia’s outburst at its high point.

The argument opened with the Justices trying to sort through alternative ways of reading a federal criminal law, to see how far its language did reach, and what Congress’s intent was about its scope.   It was a fairly dry effort at parsing words in a sweeping but ill-defined statute.  But when the hearing got to its most jarring moment, the federal government appeared to have become the accused, on trial for a perceived abuse of power. 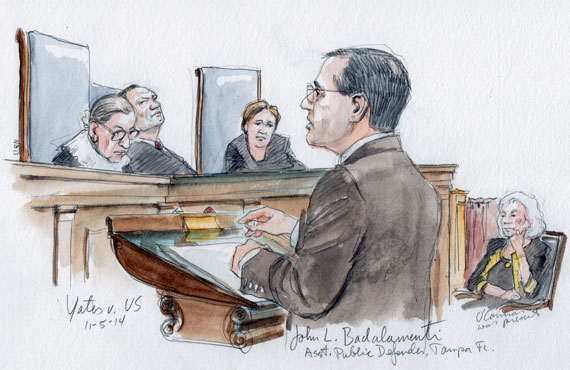 The law at issue was passed to deal with what Congress saw as a profoundly serious problem of corporate fraud — specifically, the Enron scandal — and the law sought to get business executives’ attention by raising the prospect of twenty years in prison for a violation.

But, in this case, the law had been used to prosecute a Florida fisherman, John L. Yates, for throwing overboard a batch of fish that had been caught illegally because they were allegedly too small, and he wound up with thirty days in jail.

From the outset, then, this case had the potential to come down to the question of whether there was too big a gap between the original intent of Congress and the choice that federal prosecutors made in this specific case when they went after the fisherman and the dumping of seventy-two red grouper — itself not a crime but, at most, a civil offense justifying a fine.

That was the theme that an assistant federal public defender from Tampa, John L. Badalamenti, leaned on throughout his time at the lectern Wednesday.  The Justices were quite penetrating in their questioning, and, at one point, Justice Anthony M. Kennedy, while saying that the lawyer’s objection had “considerable force,” suggested that the reading of the law he was pushing could mean that the law had an even wider breadth than the government had argued.

The exchanges left the initial impression that most of the members of the Court were skeptical of Badalamenti’s points, as they tried various hypotheticals to test just what kinds of evidence his view of the law would allow prosecutors to challenge as an obstruction of a federal investigation.   The fisherman’s lawyer wanted the law confined to the destruction of records or other items used to store information, and the Justices spun out a series of scenarios to gauge what that would entail.

Early on, it seemed as if the fisherman’s lawyer was not really getting across his basic argument that the law was drafted in such sweeping terms that it was potentially draconian.  Gradually, though, that idea was creeping into the argument, as when Justice Stephen G. Breyer commented that, “at first blush,” the law “seems far broader than any witness-tampering law, any obstruction statute, any lying to a federal agent law that I’ve ever seen.”

Breyer said his problem was how to narrow the law, and he asked Badalamenti to supply the answer.  Badalamenti said the answer was to confine it to the destruction of devices or modes for storing information — and, even more narrowly, business information.   Justice Scalia, who had largely remained out of the exchanges, did try to help Badalamenti out a bit, commenting that the law was “incredibly expansive.”

As matters turned out, Scalia was saving his involvement for the government’s lawyer, an assistant to the U.S. Solicitor General, Roman Martinez, who came prepared to argue that the law did, indeed, reach the intentional destruction of “all types of physical evidence.” 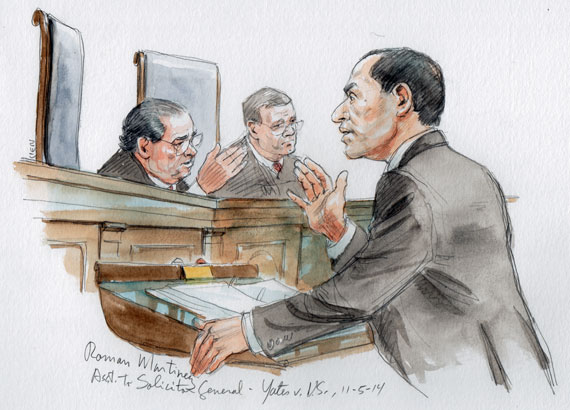 Within minutes, Scalia leaned forward and, accusingly, told Martinez that he was defending the law and its use for someone who got only thirty days.  “What kind of sensible prosecutor does that?  Who do you have who exercises prosecutorial discretion?  Is it the same guy who brought Bond, last Term?” — a reference to a decision in which the Court had ruled that the Justice Department had gone too far in using a law against the spread of chemical weapons to prosecute a woman for trying to poison her husband’s lover.

Scalia pressed on, noting the potential for a twenty-year prison sentence under this law, and asking “what kind of mad prosecutor” would use that law in a case like this one?  Martinez weakly responded that the prosecutors had not asked for a twenty-year sentence against the fisherman.

Justice Ruth Bader Ginsburg then interjected, asking whether the Justice Department provided any guidance, “any kind of manual” to limit prosecutors.  Martinez answered that the manual for U.S. attorneys told them that, in choosing what crimes to charge, to go for the “most severe available.”

In view of that, Scalia retorted, the Court was going to have to be “much more careful” about how it interpreted federal criminal laws.  When Martinez tried to portray the fisherman as someone who ordered the destruction of evidence, disobeyed a federal officer, and worked out a cover-up scheme, Chief Justice John G. Roberts, Jr., commented: “You make him sound like a mob boss.”

Just what sentence did prosecutors recommend here, Justice Kennedy asked.  Martinez said twenty-one to twenty-seven months, but then added that thirty days here was “reasonable” and twenty years “would have been too much.”

The hearing’s tone had changed totally, and Martinez was on the defensive throughout the remainder of his time.  He tried to recover by going over the specific words and headings in the law, trying to show what Congress had intended for the law.

As he was nearing the end of his half-hour, Martinez was suddenly confronted by Justice Samuel A. Alito, Jr.   The lawyer, the Justice said, had a lot of arguments on the fine points about the law, but “you are asking us for something that is pretty hard to swallow,” that this law could be used for “really trivial matters.”

When Martinez protested that the law would not be used for “trivial matters,” Alito conjured up just such small offenses as throwing a single trout, illicitly caught, back into a lake, and then Justice Breyer asked about kicking a small ember away to try to conceal a forbidden campfire in a public park.  “You could multiply the examples beyond belief,” Breyer said.

In between those exchanges, Justice Kennedy commented acidly that the Court perhaps should no longer refer to the concept of “prosecutorial discretion” if it was open to use as in this case.

Martinez’s woe had started with Justice Scalia, and it never ended until he sat down.