Argument report: Trouble at the lectern

The Supreme Court on Tuesday sent a blunt message to prison officials planning a policy that limits the religious freedom of inmates:  it would be important to have a good reason for the restriction before it gets into court.  Trying to bolster the rationale at the lectern is not a promising strategy.

A lawyer for Arkansas prison officials found that out in two quick exchanges with Justice Samuel A. Alito, Jr., that came close to collapsing his case. 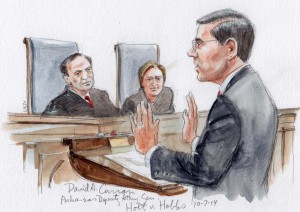 David A. Curran, a deputy attorney general from Little Rock, arguing for the state in the case of Holt v. Hobbs, took his turn before the Justices after two lawyers on the other side had repeatedly complained that the state simply had no real justification for banning all beards on inmates, even for those who might want insist that they need one for religious reasons.

Curran tried to offer two rationales:  the policy keeps prisoners from hiding anything dangerous or illegal in their chin hair, and it helps the guards identify the inmates as they move about in the prison yard or working in the farm fields.  (A third rationale, put forward only briefly, is that “prisoners are capable of a lot of mischief.”)  But the more he talked, the more the skepticism spread across the bench.

Clearly, though, his worst moments came when Justice Alito quietly probed both of the primary arguments.

As to the contraband-hiding problem, Alito suggested that the prison guards could just hand an inmate a comb and have him run it through the beard, “to see if a SIM card — or a revolver — falls out.”  It produced a broad wave of laughter in the courtroom, at the quite ridiculous image of a gun being stashed in a half-inch beard.  (There were enough modernists in the audience to know that a SIM card is a tiny electronic chip that identifies the assigned user of a cellphone; cellphones are not allowed in Arkansas prisons.)

As to the altered-identify problem, Alito tried verbally to imagine how an inmate wishing to enter the wrong barracks after a work period outside would — while out in the field — produce a razor, shave the beard, switch photo ID cards with an inmate who looked like him beardless, and go into a barracks different from the one specified on that ID card.  That, too, was such a stretch that it taxed credulity.

Other Justices had also given Curran little peace, although the Court’s members did at times make some determined — and mostly frustrated — attempts to define a standard as to when courts should defer to prison officials’ judgment about what is required for prison safety, and a standard to determine when a restriction on religious practice among inmates would go too far.

A University of Virginia law professor who specializes in church-state issues, Douglas Laycock, and an assistant to the U.S. Solicitor General, Anthony A. Yang, both attempted to persuade the Court that prison wardens should get deference only when they have some proof that they need to restrict the exercise of religious practice among inmates — and, they said, Arkansas had none. 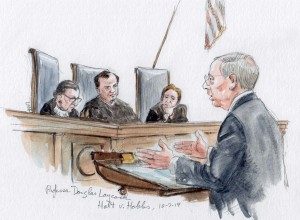 Laycock is representing the Arkansas inmate (his birth name is Gregory Houston Holt; he uses a Muslim name, Abdul Maalik Muhammad) who has challenged the state prison’s no-beard rule because his faith tells him to wear a beard.  Laycock had some trouble with Justice Antonin Scalia, who said that it appeared that Holt’s religious faith required a full beard, not one trimmed to a half-inch.  But Laycock said, somewhat unpersuasively, that Holt was willing to compromise at a half-inch.

Yang, in the case on behalf of the federal government to support Holt’s claim, echoed Laycock’s argument that Arkansas simply had not come up with a sufficient prison-management rationale to support the ban on beards.  The federal law at issue, which protects the religious freedom of “institutionalized persons,” demands a strong reason behind any prison policy that puts a significant burden on a faith practice.

Both of the lawyers on Holt’s side made a point, several times, of noting that forty or more other state prison systems do not have a total ban on inmate beards.  Arkansas’s lawyer tried to counter that by arguing that the way Arkansas runs its prison is “unique,” so it should not have to compare its policy to what is done elsewhere.

The Court will now begin deliberating the case in private, and issue a decision by the end of June (if not before).  The case, at least from the tenor of the oral argument, did not seem to be a difficult one.