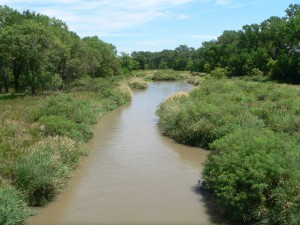 All the rivers run into the sea;

Yet the sea is not full;

Unto the place from whence the rivers come,

On Tuesday, the Court heard arguments in an original jurisdiction dispute between Kansas, Colorado, and Nebraska over flows of a common river: the Republican River. After the states disputed the terms of their 1943 compact, they enacted a 2003 settlement stipulation. When the parties confronted a breach by Nebraska and a dispute over the water supply models they used to calculate Nebraska’s share, they reached an impasse. Kansas exercised its veto power, sending the dispute first to arbitration, then the Special Master and to the Supreme Court.

At oral argument, Kansas disputed the special master’s proposal to alter the settlement stipulation’s water accounting procedures based on a claim of mistake. Kansas spent most of its argument focused on the accounting procedures changes suggested by the special master. Kansas argued that the special master exceeded the charge and upset a carefully negotiated compromise by siding with one party. Nebraska similarly focused on the accounting issue, but characterized the carefully negotiated bargain as the principle that imported water should not be counted, with the formula representing a tool for implementation as opposed to a term. Justices pushed back on both sides.

Kansas argues Against the Five-Run Solution

Kansas Solicitor General Stephen McAllister came out forcefully arguing that the settlement stipulation itself was a carefully crafted compromise. McAllister stated that all parties were aware that the accounting procedure was subject to uncertainty. Kansas’s primary objection to the special master’s report involves the special master’s recommendation to amend the accounting procedure to implement Nebraska’s proposed “five-run solution.”

Justice Stephen Breyer pushed back on the argument against reformation, noting pointedly that, due to a mistake in the model, Nebraska’s use of “imported water” from sources outside the Republican River basin is counted against it under the settlement stipulation’s accounting procedures. Justice Breyer continued: “And nobody wanted that. That would be totally unfair. … So what do you suggest we do about the mistake? Nothing?”

McAllister responded that they should send the case back and do nothing about the mistake, since it is not a mutual mistake. He emphasized that the intersection between the “five-run solution” and other issues were highly complicated and that Nebraska had gotten concessions in other areas of the settlement which kept the accounting mistake from being unfair. McAllister pointed out the effect of groundwater recharge credits as an example: “We gave Nebraska a high credit for groundwater recharge at a percentage much higher than Colorado and Kansas get and Nebraska crowed about that as a concession they got from Kansas that was worth 15 to $20 million annually, that’s Exhibit K, 133, in the record.”

Chief Justice John Roberts asked what Kansas thought of its chances if the matter were sent back to the Republican River Compact Administration, for resolution. (All disputes under the compact are run first though this body, consisting of one representative of each of the three states.) McAllister responded, “Twenty-some years ago, Kansas introduced a resolution in the RRCA that said, how about we all resolve that we will comply with the compact. Kansas voted yes, Colorado voted yes, and Nebraska voted no. So this goes back a long ways.” McAllister went on to explain that its proposed disgorgement remedies against Nebraska were necessary.

The United States argues for the special master’s disgorgement remedy

Assistant to the Solicitor General Ann O’Connell argued on behalf of the United States in support of the special master’s Report. O’Connell defended disgorgement by pointing out that disgorgement must be sufficient to discourage opportunistic breach, citing to the Restatement of Restitution and Unjust Enrichment. Justice Scalia asked whether the United States was overstating case law by citing the Restatement, telling her that “I don’t think the Restatement can change our law by just saying something by consensus of law professors.” O’Connell cited back to the classic case of Texas v. New Mexico to support her position. In response to questioning about the amount of disgorgement, O’Connell avoided taking any position at odds with the special master.   Justice Kagan asserted that the $1.8 million figure recommended was less than what Nebraska had gained by its breach, arguing against an equitable balancing approach.

David Cookson, Nebraska’s chief deputy attorney general, argued that the bargain Nebraska struck with Kansas was that water imported from the Platte River Basin would not be counted towards Nebraska’s allocation of the Republican River. Justice Scalia questioned whether the deal was actually that broad, suggesting instead that Nebraska had agreed to a formula, not a broader principle.

Scalia explained: “The parties knew that this formula would not be entirely accurate and they agreed to a fair price, that is, none of this water should be counted. But they said the way to figure out whether this water is coming in or not is this formula. Why shouldn’t they be held to that formula?”

Cookson responded that the settlement specifically provided the parties with the ability to modify the accounting formulas. Nebraska asked the Republican River Compact Administration to modify the accounting procedures, to which Kansas objected exercising its veto powers. The issue was then sent to arbitration and finally to the special master who recommended the change to the formula, the “five-run solution.”

Chief Justice Roberts asked Cookson if he agreed that the special master would have been powerless to change the formula if it had been part of the original compact as opposed to a later settlement. Cookson readily agreed that amending the compact would be beyond the power of the special master, citing Alabama v. North Carolina for support.

Justice Kagan picked back up the thread of Justice Scalia’s question and extended it further. She asked Cookson what would happen if the parties had negotiated over three distinct formulas and had chosen one. Under that situation, she wanted to know, would it be right to continue to use the formula chosen going forward? Cookson pushed back that changing the accounting procedures is basic process under the agreement, and that prior to the current dispute, fourteen such formula changes have been approved by the three states. Cookson continued that this time is different, because Kansas has objected. He reasoned that the exercise of a veto can kick the dispute to the Supreme Court to break the impasse created by the veto process in the compact itself, likening the problem to the one faced in the Pecos River Compact, brought before the Court in Texas v. New Mexico.

Chief Justice Roberts countered that the formula, as specific language in the contract, should control the general statement that imported water not be counted. Cookson argued that the imported water stipulation was the specific term and the formula was just the tool designed to deliver that deal.

Cookson defended Nebraska’s response as not showing an intentional violation of either the compact or the stipulation. He argued that Nebraska could not have foreseen dust-bowl-like conditions. He argued that there is no need for an injunction or for disgorgement, tangling with Justice Scalia again on how those remedies interact.

In rebuttal, McAllister returned to Justice Kagan’s line of questioning the choice of formulas for accounting made by the parties in the settlement stipulation. McAllister pointed out that the formula that Nebraska is seeking to have reformed was actually selected by Nebraska as its first choice during settlement negotiations. Citing the result in the boundary dispute of New Hampshire v. Maine, McAllister told the Court that it had given “New Hampshire the answer we think you should give Nebraska today, which is: ‘Sorry; you made the deal, and just because you now think you have a better way of doing it doesn’t mean we should rewrite the contract.’”

In closing, Justice Sonia Sotomayor asked McAllister how much money is represented by the difference between the accounting preferred by Nebraska and that preferred by Kansas. McAllister answered with the amount of water in dispute – between 8,000 and 10,000 acre-feet. (An acre-foot is the amount of water needed to cover an acre of land to a depth of one foot, approximately 325,851 gallons.) When Sotomayor pressed for a dollar figure, McAllister told her that the special master had valued the water to Nebraska at $362 per acre-foot. On that note, the Court adjourned.

Ryke Longest is the Director of the Environmental Law and Policy Clinic and a Clinical Professor of Law at the Duke University School of Law.