The Supreme Court pondered laboriously Wednesday the difference between what is fact and what is law.  Finding no sure way to answer, the Justices seemed tempted to go with a gut feeling that it needed to be made simple, to treat them as the same — at least for one branch of patent law.  But there is a directive from Congress saying they are different, so the temptation might wind up being a wrong though easy way out.

That was the dilemma that appeared to emerge as the Justices heard one of the biggest patent cases in years, Teva Pharmaceuticals USA v. Sandoz, Inc., over the differing — and maybe competing — roles of trial judges and a specialized federal appeals court that has a major role in shaping the law of inventions. 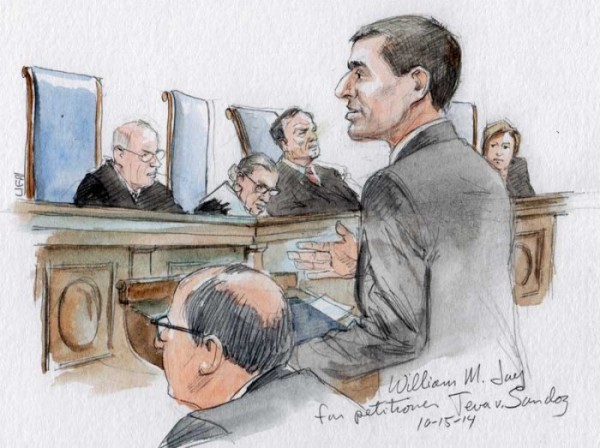 From the opening question by Justice Ruth Bader Ginsburg about what facts that appeals court should have examined with respect for the way the trial judge had seen them, to the concluding question by Justice Sonia Sotomayor about why that federal appeals court did not speak more bluntly, the one-hour argument ranged widely over how facts should be interpreted and how they relate — or don’t relate — to legal conclusions.

That is especially important in the specific field of patent law that the Justices were exploring — how to interpret what invention a patent actually covers, to determine if that is new or novel and does deserve a patent. That issue is crucial to whether Teva Pharmaceuticals’ monopoly over a highly profitable medicine for treating multiple sclerosis will last for about another year, or generic imitators will be able to go to market sooner.

In a somewhat over-simplified way of putting it, the specialized appeals court — the U.S. Court of Appeals for the Federal Circuit — treats virtually every issue bearing on the scope of an invention claim as a legal one, which is fair game for it to interpret independently, rather than deferring to what the trial judge treated as fact, separate from law.

Basically, in this case, the Justices are faced with whether to allow the Federal Circuit to be the one federal appeals court among all thirteen that does not have to obey a federal procedural rule (Rule 52) adopted by Congress that limits the power of appeals judges to second-guess the factual conclusions drawn by district court trial judges.

Teva’s lawyer, Washington attorney William M. Jay, tried fervently to persuade the Court that facts can be sorted out from legal conclusions, and they should be treated differently — and with deference — by the Federal Circuit.  Facts, such as the interpretations of an invention by “skilled artisans,” help provide the science that may be critical to whether a patent should be issued as a legal matter, he said.

But most of the Justices were not content with any generalizations about how the process of review is supposed to work, and used volleys of questions to try to help themselves understand the role that facts play.  Justice Anthony M. Kennedy asked particularly probing questions, and Justice Samuel A. Alito, Jr., asked particularly skeptical questions.   Chief Justice John G. Roberts, Jr., sought definitions of what kinds of facts supposedly counted in interpreting patent claims.

Justice Stephen G. Breyer, who often attempts to simplify things by bringing in a hypothetical that is totally remote from the question before the Court, finally moved in on Jay’s argument with a suggestion on how a court should resolve the issue of “what is a South African yellow canary?”

The court, Breyer said, was not certain what that is, so an expert would be called to the stand.  The expert says yes, it is, a South African yellow canary.  That, the Justice said, was a factual conclusion.  But, then the judge called a lawyer to the stand.  Then it becomes, Breyer concluded, a matter of law.

No one picked up on the hypothetical, so it did not seem to help in the reach for a simpler way to distinguish between facts and law.

Finally, as Jay’s time was winding down, Justice Alito brought up a recent study that he said showed that, in the real world of patent litigation, it really did not make a difference whether the Federal Circuit reviewed patent facts deferentially or independently.  “You,” he said to Jay, “want to introduce a level of complication” that would require the Federal Circuit to know how to differentiate fact from law.  “Is that worthwhile?” Alito asked.

It certainly does, in cases like Teva’s, Jay replied. And, he said, the Federal Circuit can handle the challenge, just as federal appeals courts do all the time in sorting out the difference.

The federal government is in the middle in this case, agreeing with Teva that the Federal Circuit should show more respect for a district trial judge’s factual conclusions, but agreeing with the generics that, in the end, the courts probably are going to be led to the conclusion that Teva is not entitled to a patent on its Copaxone medicine for multiple sclerosis patients.

The government’s attorney at the lectern, Ginger D. Anders, an assistant to the U.S. Solicitor General, had no more luck than Jay had in settling the Justices’ uncertainty about facts vs. law. She spent a good deal of her brief time trying to acquaint the Justices with the complex testing machinery that was used to determine a critical claim for Teva’s medicine. 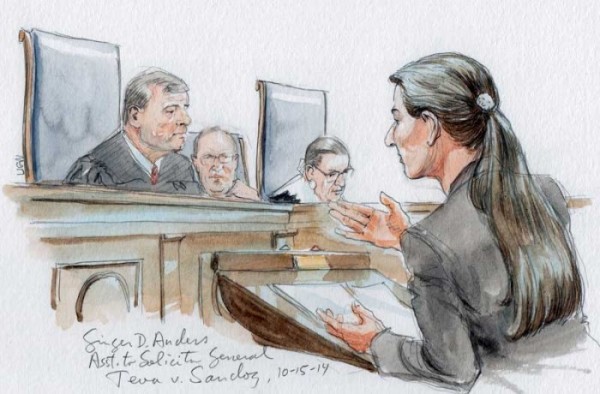 Taking the lectern, the generic companies’ lawyer, Washington attorney Carter G. Phillips, was determined to make things simpler.  The Supreme Court, he argued, essentially had already decided the core issue in a 1996 landmark patent opinion, and had made it clear that the scope of a patent is a pure question of law.   Thus, he said, the Court should uphold the Federal Circuit’s long-standing view that its review of patent claims is entirely independent of what trial judges found.

“It’s not worth the candle,” Phillips said, to try to compel the Federal Circuit to figure out when it is dealing with fact and when it is confronting a legal conclusion on a patent’s validity.  Sometimes, he said, as in this case, trial judges do not even call experts to help them decide patent validity, because it is so much a question of law, under the 1996 precedent in the case familiar to lawyers as the “Markman” decision.

Justice Elena Kagan moved in to suggest to Phillips that Rule 52, ordering appeals courts to defer to trial judges’ factual conclusions, was “a very blanket rule.”  Phillips responded that the rule is fully satisfied if a court treats the issue of patent claims as “purely legal.” 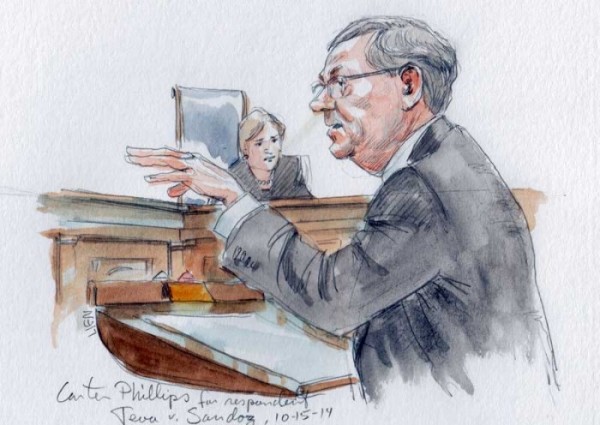 His argument, though, clearly made some of the Justices uneasy.  Both Kennedy and Justice Antonin Scalia wondered just what task Phillips would have district court trial judges do if everything they decided could be subject to full, independent review by the Federal Circuit.  The lawyer tried to reassure them, saying it was “perfectly sensible” for a judge to take testimony from experts, to help the judge (a generalist) “find out what the patent is about.”

He made it sound so simple, and, given the whole tenor of the argument, that was both tempting and unappealing, at least to some of the Justices, like Breyer.  He told Phillips: “Where are we going with this?  Are we going to carve out one part of the patent law [for an exemption to Rule 52}.  You see I’m nervous about it.”

The Court will now begin deliberating the issue in private, with a final decision to come later in the Term.  Whether the case will be finally resolved in time to salvage some of Teva’s Copaxone monopoly will remain an open question.