Argument analysis: Court wary of immunity for licensing boards, but what about doctors?

The Supreme Court is wary of allowing a state to bestow immunity from federal antitrust laws on a group of professionals regulating themselves without supervision from the state. That sentiment came through during arguments yesterday in North Carolina Board of Dental Examiners v. Federal Trade Commission. After an hour of argument, however, the precise boundaries of immunity for state agencies remained far from clear. 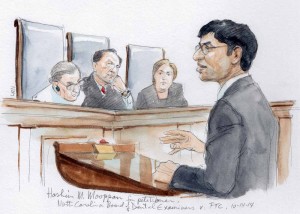 Hashim Mooppan for NC Board of Dental Examiners

Little support for the dental board

Hashim Mooppan faced an uphill battle as he argued on behalf of the North Carolina Board of Dental Examiners. His client is a dental board composed mostly of practicing dentists elected by other dentists. The dental board tried to exclude non-dentists from offering teeth whitening services.

The argument opened with a rather remarkable response to a question posed by Justice Kagan. She asked whether a state could look around at existing private trade associations and pick one to be a state agency. Counsel for the dental board answered that the formerly private trade association would instantly gain immunity from federal antitrust laws, as long as the members took an oath to enforce state law and were subject to open records laws and the state’s administrative procedure act.

That was a telling question and an even more telling answer. Under existing law, a state cannot extend antitrust immunity by allowing a private guild of winemakers to fix prices. Under the dental board’s theory, the state could exempt the same guild from the Sherman Act by annexing it into the state bureaucracy. Justice Scalia said he doesn’t buy it. At that point, he told the lawyer, “I get off your train.” Justice Scalia never appeared to get back on the train, nor did most of the other Justices.

The lawyer for the dental board did concede that a state agency that is nothing more than a sham would not be entitled to immunity. But most people recognize that the typical professional licensing board composed of and selected by market participants often acts in the interests of the profession, even though the group is not an outright sham.

The government refuses to articulate the correct rule for future cases 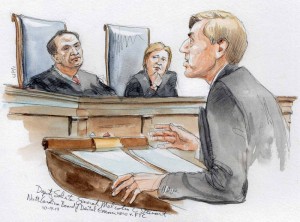 Deputy Solicitor General Malcolm Stewart faced few questions about the correctness of the outcome in this case. Instead, the Justices repeatedly asked the government to explain the rule it wants the Court to announce. Justice Alito demanded to know the contours of the government’s proposed rule. Justice Sotomayor asked, “So what do we say? How do we articulate your ruling?” Justice Breyer went so far as to float what he characterized as his “off-the-cuff idea,” and then candidly explained that he “could write such a standard pretty vaguely.”

The Justices searched for the boundaries of the rule because they were cautious about the consequences of a broad ruling. For example, subjecting members of professional boards to antitrust liability could deter members from joining the boards. The Justices also recognized why states choose to regulate professionals through agencies composed of market participants. The practicing members of the boards bring specialized knowledge that general regulators lack. But that expertise must be balanced against setting loose professional guilds with no supervision.

Justice Breyer fixated on one particular potential outcome of the Court’s decision. He repeatedly questioned the effect a ruling could have on credentialing decisions for doctors.   He said he was concerned that a broad rule would “cover to exactly the same extent every medical specialty.” In particular, he returned again and again to neurologists and brain surgeons. He wants neurologists, not non-physician state regulators, to decide who can be a neurologist. Of course, neurologists and other doctors are just as capable of anticompetitive actions as are dentists.

The Court wants to strike an appropriate balance and give adequate guidance to lower courts, states, and agencies. Perhaps sensing victory or because of its inherent antipathy toward the state action immunity doctrine, the government offered little in the way of boundaries for a ruling. In the end, the Court will likely affirm the Fourth Circuit’s ruling, but the breadth of the holding remains to be seen.