Shying away from a major constitutional ruling on Congress’s power to enforce treaties, a divided Supreme Court on Monday pared down the scope of a sixteen-year-old federal law that seeks to punish those who use chemical weapons to wreak violence.  Congress, the six-Justice majority ruled, could not have intended to make it a federal crime — with global implications — for a woman to try to poison her husband’s lover.

Three Justices, however, would have ruled that the 1998 law did apply to that woman’s misconduct, and they would have struck it down as beyond Congress’s constitutional powers.  Since that view did not command a majority, the decision in Bond v. United States left in lingering doubt just how far Congress may go to pass a law to implement a world treaty. 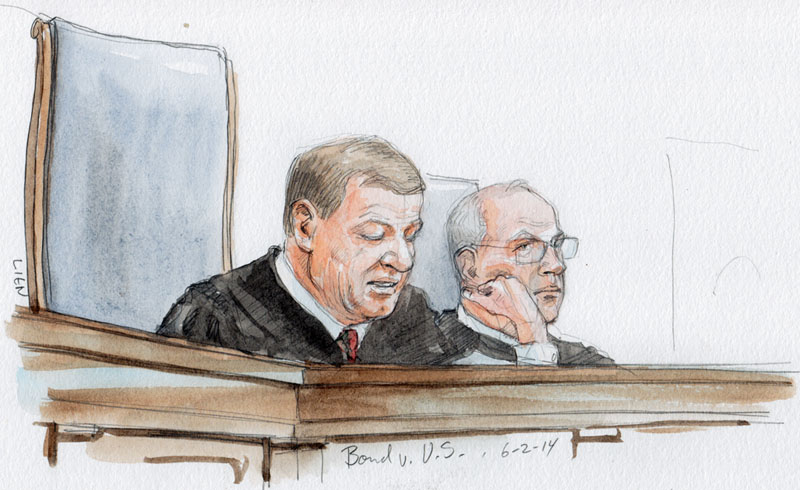 The Court appeared to bring to an end a case that even the Justices acknowledged was a “curious” one:  a federal criminal prosecution, with a potential life sentence, of a Pennsylvania woman because she sought revenge by spreading poison chemicals on surfaces that her husband’s paramour would touch — a door knob, a car door handle, the mailbox.  The other woman did touch one of those surfaces, and got a minor burn on a thumb — dealt with by rinsing her hand with water.

Although the prosecuted woman, Carol Anne Bond, may have violated a number of laws in her state, she actually was charged under state law only for making harassing telephone calls and letters, and state officials refused to accuse her of assault.  She had pleaded guilty to the federal crime of using a “chemical weapon,” on condition that she could later challenge the prosecution. She was convicted under the 1998 law, but Monday’s decision wiped out that result because the law did not even apply to what she did, according to the Court majority.

Aside from its own unusual facts, the case had attracted wide notice because it seemed to pose the ultimate question of just how far Congress could go, in regulating activity entirely inside the U.S., when it was enacting a law to carry out a global obligation that the federal government had assumed under a treaty.  In particular, the case raised a question about the continuing validity of a 1920 precedent, Missouri v. Holland, that had seemed to endorse sweeping congressional power to implement treaty promises.

But Chief Justice John G. Roberts, Jr., writing for himself and five other Justices, invoked the traditional practice of avoiding constitutional issues if not necessary to a decision, and chose to deal only with the question of whether Congress had meant to pass a law that was so nearly limitless that it would reach “a purely local crime” growing out of “romantic jealousy.”

‘The global need to prevent chemical warfare,” the Chief Justice wrote, “does not require the federal government to reach into the kitchen cupboard, or to treat a local assault with a chemical irritant as the deployment of a chemical weapon.   There is no reason to suppose that Congress — in implementing the Convention on Chemical Weapons — thought otherwise.”

Among other reasons that the majority felt driven to read the 1998 law narrowly was its view that, as applied to Carol Anne Bond’s case, the law meant a deep intrusion into the traditional authority of states to enforce criminal laws within their own jurisdictions.  The decision did not in any way seek to absolve her of criminal behavior, but stressed that this was a matter that state law could handle.

The other three members of the Court — Justices Samuel A. Alito, Jr., Antonin Scalia, and Clarence Thomas — voted in favor of the result, thus making unanimous the decision to overturn the conviction in this case.  But each of them wrote a separate opinion, explaining that they could find no reason that the 1998 law did not explicitly cover Mrs. Bond’s conduct.  However, because of that sweep, they would have held the law invalid as beyond Congress’s authority to pass federal laws to carry out treaties.

Justice Scalia’s separate opinion, joined in full by Justice Thomas and in part by Justice Alito, was a sweeping protest that the majority had rewritten the law rather than applying it as written.  Justice Scalia argued, in fact, that the majority had so compromised the scope of the law by such “gruesome surgery” that the law probably will not survive as a basis for prosecuting anyone for violating the chemical weapons treaty.

The treaty itself, supported by 190 nations, does not have its own enforcement mechanisms.  It left that up to each nation agreeing to the obligations to stop the spread of chemical weapons.