Leaning heavily upon a long history of Congress and presidents finding ways — sometimes clumsy — to make the federal  government work, and perhaps silently wishing for a day when they might do so again, a sharply divided Supreme Court on Thursday embraced a practical constitutional solution to filling temporary vacancies in U.S. government posts.   Refusing to strip presidents of nearly all power to make such appointments, as four dissenters would have, the majority set some limits but still kept that authority mostly intact.

The decision did nullify a handful of President Obama’s appointments because the Senate was not technically in recess when he made them, and thus the ruling raised doubts about whether the actions those officials took while holding such appointments remain valid.  But the scope of that defeat for Obama in particular and presidents in general seemed quite small. 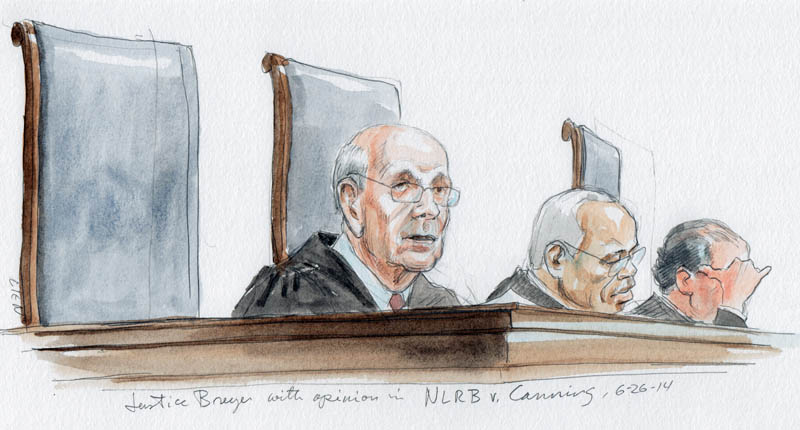 Justice Breyer with opinion of the Court on recess appointments. (Art Lien)

The Constitution as finally ratified is now well over two centuries old, but the new decision marked the first time the Court had given its view of the meaning of a clause in Article I that gave presidents some power to fill government offices when the Senate was not in town and thus could not join in the shared assignment of passing upon such appointments.

Whatever those who wrote the original Constitution might actually have intended by what they wrote in that clause, the Court majority said the real clues to its meaning are found in some two centuries of “compromises and working arrangements” between the branches of government at opposite ends of Pennsylvania Avenue in Washington.

The split within the Court was as vivid an example as can be given of constitutional pragmatism winning out over constitutional formalism, and a very clear illustration of how the Constitution gets some of its most basic meaning from experience rather than from logic or hard-and-fast legal rules.

It thus was absolutely no surprise that the majority opinion would have been written by Justice Stephen G. Breyer, who has established himself as the most pragmatic of the Justices, and that the separate opinion (a concurrence but reading much like a dissent) would have been written by Justice Antonin Scalia, long recognized as the devotee of a Constitution of rules rooted in Founding era understandings.

Both recited passionately from their opinions, for nearly a half-hour Thursday morning, as the Court announced its much-awaited ruling on National Labor Relations Board v. Noel Canning — a run-of-the-mill workplace dispute that had mushroomed into a deep and fundamental inquiry into how best to interpret the Constitution.

Here is how the Court interpreted that clause governing presidential appointments during Senate recesses — contrasted, on each point, with what the Court rejected:

Second, the president may make a temporary appointment when the Senate is in recess, even if the vacancy arose before the Senate became unavailable and remained unfilled when it took a recess.  The Court refused to embrace the notion that the power applied only to a government post that became vacant during a recess, and had to be filled during that recess.

Both of those parts of the decision went in favor of presidential authority to fill vacant posts.

Third, in the only part of the ruling decidedly against presidential prerogative, the Court barred the president from filling a vacancy when the Senate is holding what it, by its own action, treats as a working session even if it does no real work and shuts down fully every three days.  That is too short to be treated as a recess.

On this point, the Court refused to second-guess the Senate’s view that, in that situation, it is available, so no recess appointments can be made no matter how “empty” the Senate chamber may actually be during such pro forma meetings.   The Court did say that the Senate must have the option, during such a brief gathering, of actually doing some legislative business, whether or not it actually does.

Over and over again, the Breyer opinion stressed that history was the Court’s guide, and it found what it treated as overwhelmingly compelling evidence that the working understanding between Congress and presidents has been that the recess appointment power would be exercised as the Court found authorized by the Constitution.

The separate Scalia opinion roundly criticized the majority for providing constitutional cover for a massive seizure of presidential power, existing only because Congress had not done enough to resist it.   The ruling, Scalia wrote, would do long-term damage to the idea that the Constitution does not allow one branch of the federal government to trammel another branch’s basic powers.

That opinion was joined in full by Chief Justice John G. Roberts, Jr., and by Justices Samuel A. Alito, Jr., and Clarence Thomas.

The one part of the controversy about which the Court said nothing was the legality of the actions that members of the National Labor Relations Board had taken when its quorum was made up of members who got their appointments during Senate recesses — appointments that Thursday’s ruling found to be illegal.

The board has since gotten a full membership of five members whose appointments were ratified by the usual constitutional Senate advise-and-consent function.  That properly filled board presumably has the option of revisiting each one of the potentially questioned rulings and ratifying them as if they were doing so for the first time.