Leaving the federal government with considerable power to impose controls on greenhouse gases that contribute to heating up the planet and causing climate change, on Monday the Supreme Court also delivered a stern lecture to the Environmental Protection Agency for claiming regulatory power that Congress did not give it.

The decision was a compromise ruling that split the Court: the vote was five to four to reject EPA’s broadest view of its power over greenhouse gas emissions, but the Justices voted seven to two to allow EPA to impose air pollution control strategy on many of the power plants and other fixed sources of greenhouse gases.

Justice Antonin Scalia, the author of the lead opinion, said from the bench that the Court was leaving the agency with authority to cut back on such pollution at eighty-three percent of the sources across the country, while denying it authority over an additional three percent.  “EPA is getting almost everything it wanted in this case,” he commented. 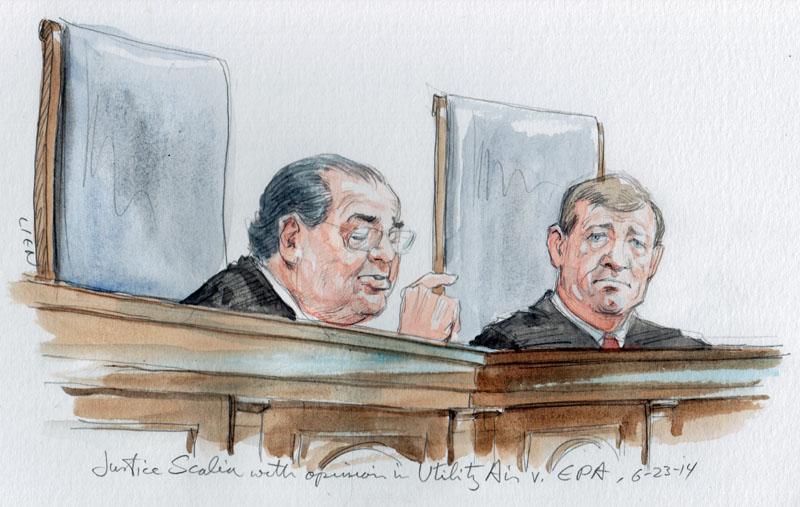 While EPA itself and the Justice Department basically claimed afterward that they had won this sharply contested case, EPA itself did not escape some of the sharpest judicial language that a court can use to rebuke an agency for stretching its authority too far.

“An agency may not rewrite clear statutory terms to suit its own sense of how the statute should operate,” Justice Scalia wrote. “We are not willing to stand on the dock and wave goodbye as EPA embarks on a multiyear voyage of discovery” about how it wants to regulate greenhouse gases.

It was “patently unreasonable — not to say outrageous — for EPA to insist on seizing expansive power that it admits the statute is not designed to grant,” the opinion said.  It accused the agency of “laying claim to extravagant statutory power over the national economy.”

If EPA were to get the Court’s approval for its broadest view of its powers in this field, Scalia added, that “would deal a severe blow to the Constitution’s separation of powers.”

Technically, and beyond the sometimes severe rhetoric, this is what the decision in six separate petitions (the lead petition was Utility Air Regulatory Group v EPA) actually held:

First, EPA may not move to regulate all forms of greenhouse gas emissions just because it has authority to do that in some contexts — such as emissions from the tailpipes of automobiles and trucks.

Second, Congress specified the specific threshold amounts of greenhouse gas pollution that EPA could regulate, and thus the agency had no power to rewrite those limits, even if it did so to make regulation more manageable by lowering the limits so that EPA was not trying to control such pollution beyond major sources — like power plants — to include even apartment buildings and schools.   If the law as written could not be carried out without bringing under EPA supervision “millions of small sources,” it was up to Congress, not the agency, to narrow the clear terms of the law, the opinion made clear.

Third, EPA does have the power, if it is already regulating a specific source because it emits other kinds of air pollution, to require that source to use the best available technology also to control greenhouse gases.

The parts of the ruling that went against EPA — that is, the parts which said that the agency may not reach the three percent of stationary sources of air pollution that are not already emitting other kinds of pollution and thus are already under EPA restrictions — did not involve a section of the Clean Air Act on which the Obama administration relied earlier this month when it released a plan to cut carbon pollution from existing power plants in coming decades.   That was not before the Court in the Utility Air Regulatory Group case.

Justice Scalia’s main opinion had the full support only of Chief Justice John G. Roberts, Jr., and Anthony Kennedy.  Justices Samuel A. Alito, Jr., and Clarence Thomas added their support for striking down EPA’s expansive view of its greenhouse gas powers, making that a five-to-four ruling, but dissented on allowing EPA to regulate those gases at sources already restricted in releasing other pollutants, making that a seven-to-two result.

Justice Stephen G. Breyer, together with Justices Ruth Bader Ginsburg, Elena Kagan, and Sonia Sotomayor, would have upheld EPA authority to reach all forms of greenhouse gases by reading the “any pollutant” language of the Clean Air Act expansively, so they dissented on that point.  They supported the Court’s ruling that permitted EPA to impose control technology on power plants already required to limit other forms of air pollution.