Opinion analysis: A new limit on the death penalty

Twelve years after leaving it to the states to decide when an individual convicted of murder was too intellectually incapacitated to be executed, a divided Supreme Court on Tuesday withdrew some of that discretion.  The states, the five-to-four majority ruled, cannot use a fixed IQ score as the measure of incapacity to be put to death.  “Intellectual incapacity,” the Court said, “is a condition, not a number.”

But even the new attempt at guidance may have left some uncertainty.  While states were told that they cannot make an IQ test score anywhere above 70 as permission for an individual’s execution, it did say that it was not ruling on whether a state could set the fixed score at 75 or above, and use that alone as the measure. 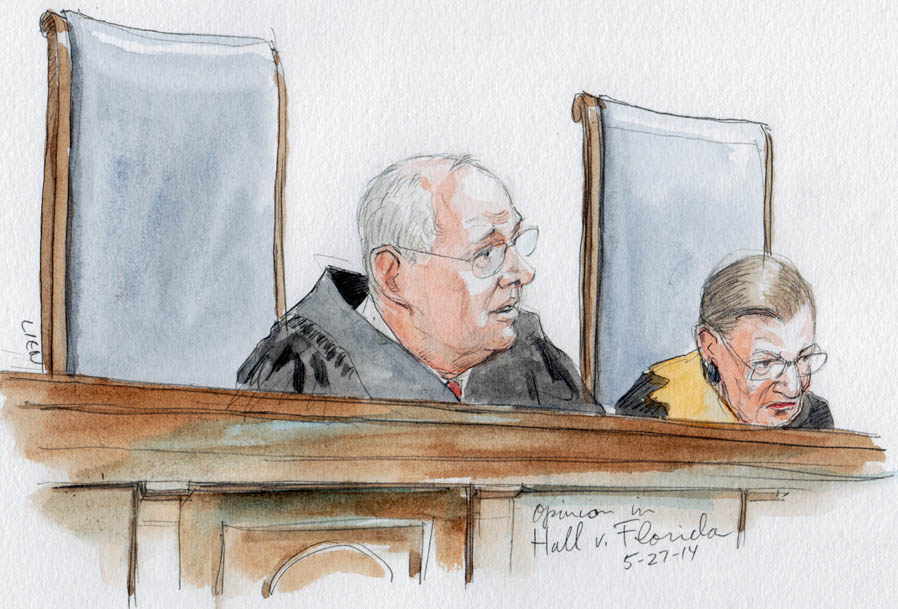 If there was an explicit legal rule laid down in Hall v. Florida, it was this:  if the individual claiming intellectual incapacity has an IQ score that falls somewhere between 70 and 75, then that individual’s lawyers must be allowed to offer additional clinical evidence of intellectual deficit, including, most importantly, the inability to learn basic skills and adapt how to react to changing circumstances.

The Court applied that rule, along with a studied display of skepticism about the reliability of test scoring in general, to strike down the approach used by Florida that would permit the execution of any convicted individual whose IQ tested anywhere above 70.

The decision did not determine, in a final way, the fate of the individual in the case, Freddie Lee Hall, who was sentenced to die for the 1978 murder of a pregnant housewife. Hall was convicted of abducting her from a store parking lot in Leesburg, Florida.  He and another man then sexually assaulted and killed her.  After that, the two men went to rob a convenience store in a neighboring county, and shot and killed a deputy sheriff who had responded.

Hall, over the years, had been given IQ tests several times, but his case before the Supreme Court proceeded on an assumption that the state had used a score of 71 for him as making him eligible to be executed, because of its above-70 rule.

Justice Anthony M. Kennedy’s opinion for the majority insisted that the Court was not moving the rule of law on executing those who claim intellectual disability very far from where it had left that question twelve years ago in Atkins v. Virginia.  But the opinion canvassed the experience of states across the country, and concluded that it was genuine rarity — if not unprecedented except in a very few states — to make anyone eligible for the death penalty based simply on an IQ score above 70.

Kennedy was joined in the opinion by Justices Stephen G. Breyer, Ruth Bader Ginsburg, Elena Kagan, and Sonia Sotomayor.  The main opinion relied heavily upon medical learning about the nature of intellectual disability — the phrase the Court adopted from that community, replacing the traditional phrase it had previously used, “mental retardation.”

The ruling did not rule out states’ use of IQ test scores as part of the analysis of whether an individual had sufficient intellectual functioning to qualify for the death sentence after being convicted of murder.  But it stressed that any use of such scores must always take into account the “inherent” imprecision of such scores, and commended those states that go beyond test scores to use more standards of clinical measure to determine such incapacity.

Justice Samuel A. Alito, Jr., wrote the dissent, joined by Chief Justice John G. Roberts, Jr., and Justices Antonin Scalia and Clarence Thomas.   The dissenting opinion said that, for the first time, the Court had actually abandoned its former reliance in judging eligibility for the death sentence on the consensus among the states.  This time, Justice Alito wrote, the Court turned over the issue largely to the practice of psychiatric medicine and, in particular, to private medical associations to determine a constitutional rule.